AirPrint: a few observations and comments

I do not know how you demand for the ability to print documents directly to the printer with a Mac or iOS-devices (technology called AirPrint), but it so happens that at any given moment – this is the only way to get a paper document. Wireless printing technology, however, as all such things done in Apple, implies ease of use, but in fact there is not so smooth.

Generally, AirPrint ™ – technology developed by Apple not so long ago (in 2010), allows you to print from computers Mac, iPhone or iPad simple and intuitive way. AirPrint to work do not need drivers do not need virtual settings. The principle of operation is the use of AirPrint wireless protocol Bonjour, it is necessary for the detection and notification of the printer that has a job for him, and it must perform. User spared the agony software installation and configuration of the printer, it does not need to know the IP-addresses, port numbers, and so on. And do not send any letters. 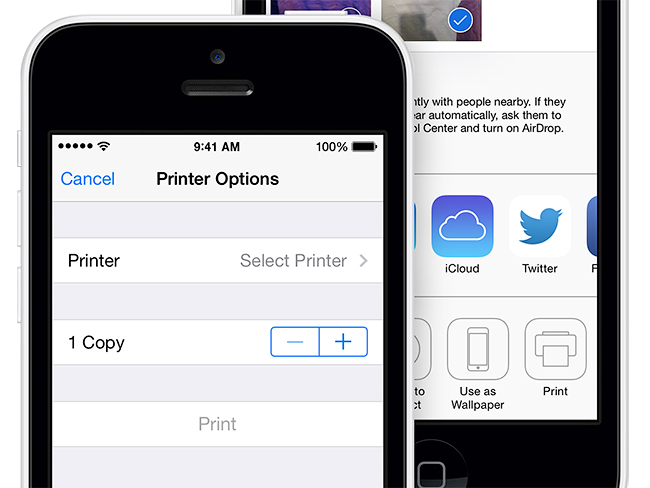 Within the LAN all as simple as possible. If there is a printer, which supports the ability to work with AirPrint. Here is a complete list of all models of this kind of equipment manufacturers that pay Apple for licensing.

The notes to the instructions for use AirPrint, posted on the official website of Apple, there is a small caveat:

Access from Mac to a printer connected to any AirPort-device works perfectly. Interesting movie turns: being available to the iPad or iPhone, to print something on a printer connected in this way, using AirPrint, impossible. Of course, you can simply send a link to a document, send a PDF or something else – but it is a compromise, it is not in the spirit of “Apple-wei.” 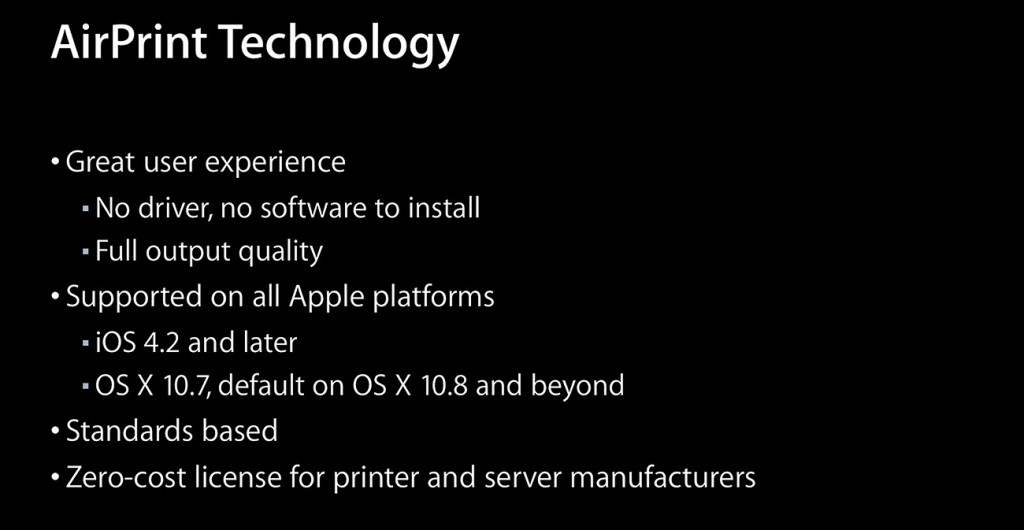 At WWDC 2013 report was presented to developers with a beautiful presentation and a detailed explanation of algorithms AirPrint (if you’re interested, a 40-minute video in English is available on YouTube ). Looking at “between the lines” of the report makes it clear that the process of printing from iOS, using AirPort, is impossible without the printer drivers on one of these devices. ARM-processors for iOS such drivers do not exist, as there is no driver that supports a variety of processors that are equipped with AirPort. Although, if they existed, I have no desire to install them on your iPhone or router Apple. Plus, there are some security restrictions within them impossible to give any driver the printer manufacturer or AirPort-iOS device.

Of course, there are paid, and it should be noted rather not cheap solutions, like the Presto or Printopia , avoids the above limitation. But then there are questions to Apple: «Why do not instantly good, comfortable and right?” And royalties (generally, their existence is in serious doubt) has absolutely nothing to do with.

If you, our dear readers, faced with similar problems, looking for or even found ways to overcome the difficulties with AirPrint – Share your experiences in the comments very interesting.

TAGPROBLEMS Technology WI-FI
Previous PostMetal Case for Samsung Galaxy S5 Apple will be releasing a partner Next PostLine MacBook: back to the past?