Samsung has started 2016 with the release of an updated version of its “local” smartphone. This line of smartphones sold only in certain markets, and very rarely appears in European countries or the United States. So, you have to visit China and some other Asian countries to buy Samsung Galaxy J1 2016.

Let’s be honest, we did not notice any big improvement over the previous model year. The screen remained the same 4.5 inches. However, the memory has been increased to 1GB, while the Galaxy J1 of the first generation was equipped with 512 MB or 768 MB in models 3G and LTE. We believe that Samsung Galaxy J1 2016 does not deserve a place in the middle class of smartphone market. The main problem is weak specifications. However, the price is quite justified. The price of the smartphone is a little more than $100.

We hope that Samsung understands that Chinese market has a very high level of competition, and this smartphone looks worse on the background of the device of local manufactures.

Features Samsung Galaxy J1 2016 little changed compared to the previous generation of smartphone. The new smartphone is equipped with 4.5-inch Super AMOLED screen with a modest resolution of 800 × 480 pixels. Manufacturer selects quad-core Exynos 3475. RAM and built-in memory is 1GB and 8GB respectively. In addition, the user can expand the internal memory via MicroSD up to 32 GB.

On the back of the smartphone is placed 5-megapixel camera, while the front has a 2-megapixel, so the owner of the smartphone will be able to enjoy video and selfies, but pretty poor quality. Samsung Galaxy J1 2016 has a standard set of connections, including LTE, Wi-Fi, Bluetooth, MicroUSB 2.0, GPS-and mini-jack for headphones. Smartphone comes with a battery capacity of 2050 mAh. 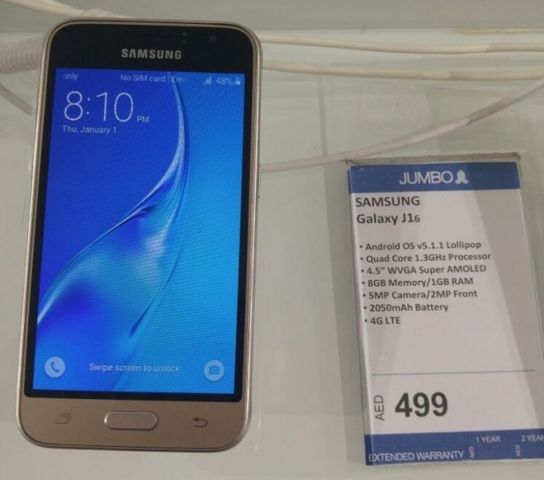 The main competitor of Samsung Galaxy J1 2016 can be considered Elephone Ivory. Another option is Bluboo Xtouch 4G, which offers more advanced features and LTE connection. And the last option that I would recommend, it’s Alcatel OneTouch Idol 3 with 4.7 inch screen.

Price Samsung Galaxy J1 2016 will be $135, but I think that’s a pretty high price for a smartphone with such list of specifications. In addition, it is necessary to take into account the fierce competition from the Chinese manufacturers of smartphones. Thus, we can say that the Samsung Galaxy J1 2016 will be difficult to win the sympathy of users.