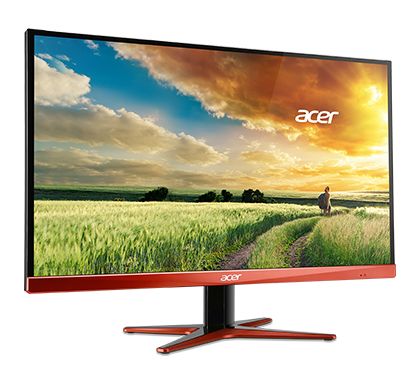 Gaming monitor – already well-established concept, typically including a fast matrix with minimal delay and high input refresh rate. More recently, to the sacred parameters “1 ms, 144 Hz,” added another feature: Support for adaptive change the screen refresh rate. We have already had the opportunity to meet with the decision from NVIDIA, now it was the turn to see what can the implementation of such technology from AMD.

The external monitor does not look quite usual, although this is achieved, we can say cosmetics – multiple inserts of brown plastic with a surface coating imitating “bronze”. The rest of the Acer XG270HU – a typical representative of the “galaxy” models with the frameless screen as simple as possible to stand. 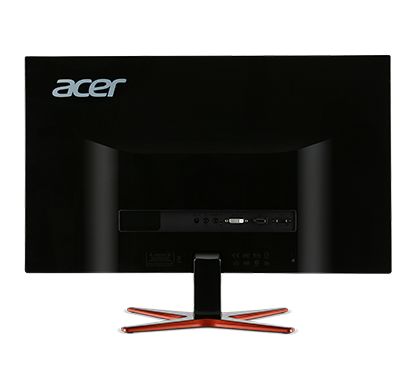 The monitor is quite thin, “frameless” is achieved, as in other models, the use of a protective screen over the display – in the ON state, it is clear that the frame is still there (if we assume a thin panel framing the display, the width of the black borders around the image of 8 mm). Below the image visually supports the “bronze” panel height 2.5 cm, it is possible to find a manufacturer’s logo and a small indicator of activity, moderate glowing blue.

Stand this model – Phillips, thanks rubberized feet monitor does not slip on the table; mount the screen to the stand – medium hard, pressing the button and adjust the screen is noticeably shaken. Because adjustments are available only to change the angle of the screen; rotation around its axis, the height adjustment and transfers portrait mode in this model no.

All connections are concentrated in the shallow niche above the mounting feet to the display and directed horizontally – as the possibility of mounting the monitor on the wall here, this decision creates only aesthetic “inconvenience” as openly protruding from the back of the cable. From the video input from Acer XG270HU an almost complete set – DVI, HDMI 2.0 and DisplayPort. Also here there is audio line in and headphone output.

To control monitor uses 5 hardware buttons located on the bottom of the display.

Their location could not marked on the front panel, so the user just feels them blind and presses a button – it causes the OSD, indicating what functions are assigned to the buttons and where they are. 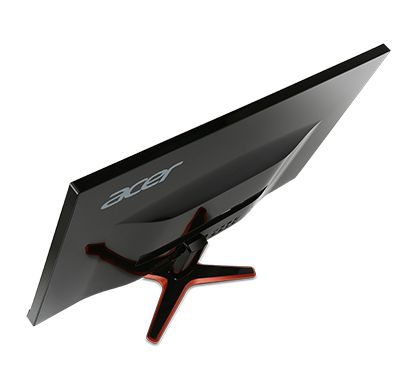 Here, the first item is “image”, where the user can, again, select the video mode via the Acer eColor Management, to reduce the proportion of blue (making the image more “warm” and pleasant to read), adjust brightness / contrast, select the color temperature adjust the settings for each color separately, by switching the range of 2.2 to 1.8 and enable the option “high sharpness” (which also improves the image contrast and makes the shadows deeper).

The second section of the menu, OSD, contains only one item – the display time of the OSD. In “Settings” you can select the wide mode, switch to a different video input, use the overdrive, select the menu language, enable dynamic brightness control, etc. It also resets all settings to factory defaults. And the last section, the “Information” shows information about the current video mode and serial number.

What is FreeSync in Acer XG270HU?

FreeSync – AMD technology is designed adaptively changing the refresh rate. It is designed to eliminate motion artifacts in games where the frame rate does not match the refresh rate – and the picture “stratified”, because it consists of two different half-frames. Software solution to this problem is the use of vertical synchronization (Vsync), but it has its serious drawbacks: the video card in the formation of a new frame each time have to wait for the update of the monitor, which leads to delay entry and often measurable performance degradation.

FreeSync solves the problem differently. Using this technology is no longer monitor “controls” the video card, and vice versa – the video card causes the monitor to dynamically change the refresh rate, depending on the kind of frame rate per second, it can currently provide. As a result, there is no (or almost no) reduce productivity and increase input lag – the monitor refreshes the screen only if the frame is already prepared graphics.

The first such technology is introduced NVIDIA – it is called G-Sync, works, of course, only NVIDIA and requires installation of special module monitor (which significantly increases the cost of its value). FreeSync became, in fact, “the answer AMD» for G-Sync, and at least in theory, this technology looks interesting. So, it does not require any additional hardware modules production of the AMD – company together with VESA FreeSync developed as an open standard, which was introduced in the DisplayPort 1.2a specifications and is now available to all manufacturers of monitors without having to deductions “compensation” for its use. Again, in theory, this should lead to a monitor that supports FreeSync, which will be much cheaper than similar G-Sync-models. At the moment, unfortunately, these monitors are still too small (about a dozen on a number of major manufacturers), to allow a reasonably accurate price comparisons, however, it may be noted beforehand that monitors FreeSync look really cheaper in comparison with monitors with G -Sync.

Number of GPU and APU, supporting FreeSync, unfortunately, small – if support G-Sync is available in all chipsets NVIDIA, since the GeForce GTX 650Ti BOOST, the only supported FreeSync family Kaveri hybrid chips and video cards based on chips R7 260, R7 260X, R9 285, R9 290, R9 290X and R9 295X2. Connecting naturally, must be carried out by DisplayPort. 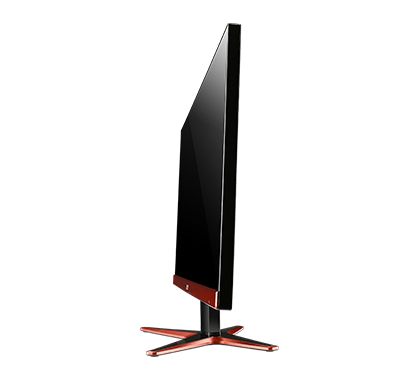 We used video card XFX R9 290 – in the first turn on the computer determines if the video driver to monitor and support FreeSync offers open Catalyst Control Center to enable its use. At this all the settings are completed – except maybe check whether the monitor operates in 144 Hz. The result, as expected, nothing subjectively no different from what we have seen during the test ASUS PG278Q – the maximum possible fps in games without artifacts out of sync and the picture is very smooth, especially noticeable in dynamic games. It is difficult to describe in words, but the effect of using FreeSync really impressive, and the importance of the technology, perhaps not inferior to 144 Hz refresh rate. In fact, what is the use of the monitor is theoretically able to update the screen with such frequency, if the gamer in most modern games at high graphics settings (and not sky-high PC configurations) has a choice – or 60 (or even 30) frames per second when the Vsync, or smooth picture, but suffers from artifacts out of sync?

Like other frameless monitors from Acer XG270HU matte finish screen, which is why crystal effect (slight graininess in the plain areas of the image) is present, albeit moderately.

Despite the already extremely fast response time, the monitor has the possibility of “acceleration” – in settings you can choose two different degrees (or turn it off completely). In the test images show that even when off overdrive special blurring is not observed, and some fundamental differences from the included overclocking (except for artifacts in the form of trails behind moving objects) can not be seen. 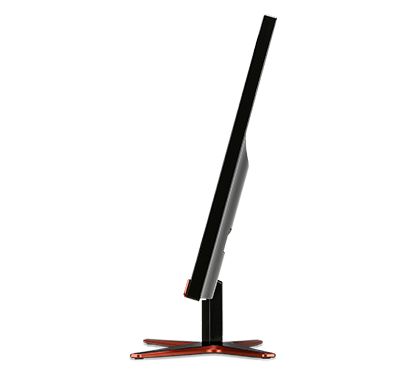 To adjust the brightness, apparently, in this model is not used PWM (or flicker frequency so high that define it “by eye” is not possible). The minimum level of brightness at the same time is quite high – 74 cd / m²; it will be enough for work or play in a room with moderate or low light, but the light is switched off for this monitor will not sit very comfortably. Maximum brightness (the average value of the measurement results in 35 points of the screen) has reached 315 cd / m², and the difference between the brightest (land slightly to the left and above the center) and the least bright (bottom right corner) amounted to 76 cd / m², which is quite a lot but for gaming monitor is not critical.

If we talk about the viewing angles, here we can say that Acer XG270HU, though looks quite well compared to other monitors in the TN-matrix, but to compete with models in the IPS or VA of course he can not. And if the deviation in the horizontal plane distortion of the image is relatively weak, the vertical we see the typical problems inherent in all TN-monitors. However, it is worth noting that in the normal location of the user to monitor these problems do not occur.

Leak lighting, this model is virtually absent – when displayed on the monitor of black color, it looks uniform and to detect very weak light background at the bottom may be only in a completely dark room.

Glow effect is also very weak – when viewed from above at a large angle appears subtle dark gray glow on a black background; in normal operation, it will not be able to notice.

All preset video modes general picture is about the same – significantly (up to 1.2-2.0) down range (which leads to a fading picture) and only an exact match standard color temperature 6500K. The user-mode range is raised to 2.1, the other parameters as a whole are at an acceptable level, color accuracy was within the norm, especially as the monitor is not intended for professional graphics work.

Of course, hardly anyone would calibrate the gaming monitor, but we decided to check what results will this procedure. The result was quite logical: the color accuracy has increased significantly, color temperature and gamma curve as to be in conformity. 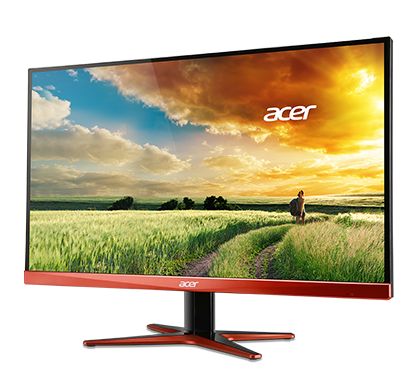 Acer XG270HU – an interesting game with the characteristics of the monitor, which are still very rare – a diagonal of 27 inches, the resolution 2560h1440 points, 1 ms response time (GtG) and the maximum refresh rate of 144 Hz. Such models can still be counted on the fingers of one hand, but the manufacturer of that was not enough, and he added to the monitor support the technology of adaptive change the refresh rate AMD FreeSync. It is perfectly “played in a pair of” high refresh rate and makes the picture of the game smooth and the gameplay itself – more responsive and comfortable. Unfortunately, it is working FreeSync only in conjunction with a fairly limited number of hybrid chips and graphics cards AMD.