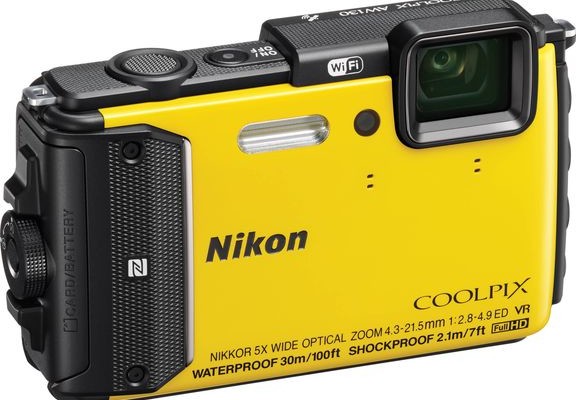 Over the past two or three years compact cameras almost exhausted themselves in the role of the main camera on the market, being forced out from one side getting better smartphones, on the other – and affordable mirrorless SLRs. However, there are two niches in which the form factor feels good and is not going to go to the arena. First niche – compact top-class, with excellent optics and advanced management tools. This is a great choice for fans who are not ready to purchase interchangeable lenses and want to buy a small and functional device that can solve many common fotozadach. The second niche – camera for extreme shooting withstand unprofessional dive and drop the human growth. Today we look at one of these new products, Nikon Coolpix AW130.

In late August 2011, the company Nikon has announced a new line for himself, which received the letter index AW and three-digit numbering. Nikon Coolpix AW130 – the fourth version, announced in mid-February 2015

Among the founders of the club manufacturers submersibles Nikon does not mean the company has entered into it after its main competitors. However, the debut was a success, and Nikon Coolpix AW130 now looks decent on the background of rivals in this particular area.

The relatively small size and weight of the housing protects the electronics and optics from the external environment. Stated ability to withstand immersion to a depth of 30 meters, a drop from a height of 2.1 m and frost down to -10 ° C. 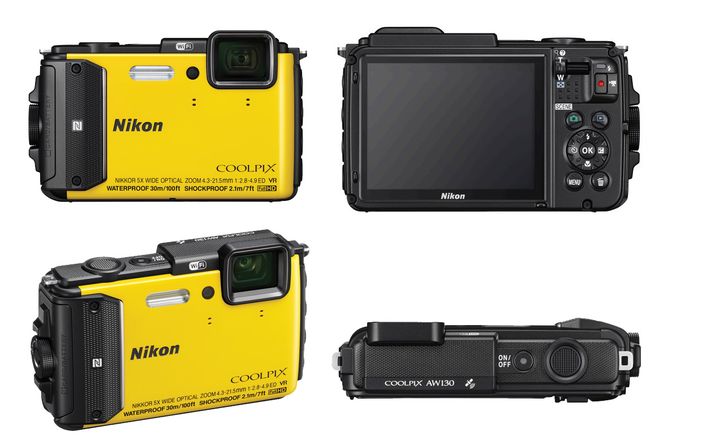 Compared to previous versions in Nikon Coolpix AW130 has a number of very useful innovations.

Secondly, the permissible immersion depth increased from 10 (for the AW 100) and 18 (for the AW 120) up to 30 meters under the condition of being under water is not more than an hour. Perhaps as deep dive, not all fans, however, this figure demonstrates the increased reliability of waterproofing.

Location of controls virtually unchanged. The top of the body is still a couple of buttons – power up and descent. On the rear panel with the appearance AW 120, nothing has changed – a five-way joystick (diagonal keys are, but they are rarely involved) in the frame of the four hardware buttons, zoom lever, button video recording.

On the left side of the casing three buttons to call up the world map, start Wi-Fi-module and to activate the tap control, but they will be discussed later.

All of them are pressed tight, which should prevent false alarms.

The front panel of glass in addition to secure additional lens is located a couple of microphones, AF assist, lamp and the flash.

At the bottom of the case is only a tripod socket. Unfortunately, it is still plastic, although cheap (even for Western buyers) can not call the camera.

Node waterproofing battery mines USB and video output, as well as slots for memory cards makes a favorable impression. Judging by the fact that its design has not changed, the developers tried their best. Wheel clamp securely holds the plug, the main thing – to prevent falling grains of sand on the gasket (do not open the camera at the beach, this is the number of the hotel or apartment). Supplied is a brush for cleaning the sand and salt crystals.

The screen on the rear panel of a three-inch, 921 thousand. Pixels. It is not sensitive to touch. The display, made of OLED-technology good viewing angles, but at maximum brightness of the picture is well discernible even at the beach or a snowy slope.

The choice has several options of finishes, including hacks.

Nikon Coolpix AW130 – a simple amateur camera, so if you want to control the process of shooting from A to Z, look for another model. 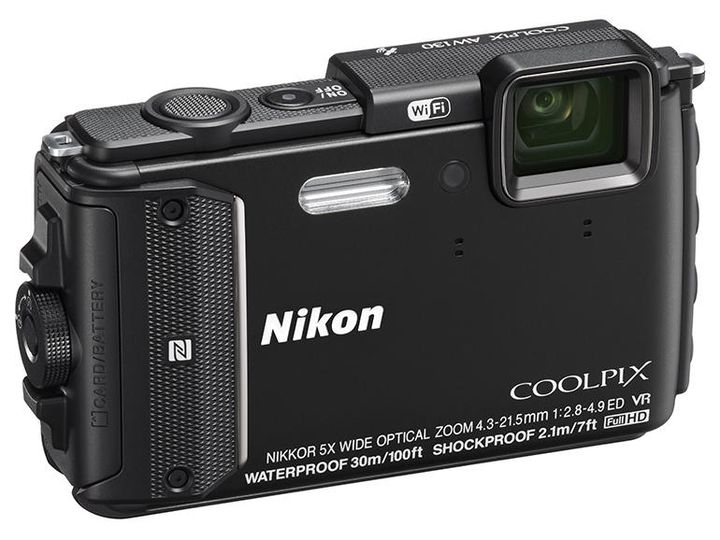 System jitter compensation device combined – electro-optical. When shooting video with it the picture is very smooth.

Focusing is performed by contrast method. Test survey showed that the accuracy of the device corresponds to the class. Any object tracking, continuous-frame and focus. In recording mode, video autofocus works well, firmly holding the object in the zone of sharpness.

In addition to software shooting mode (with exposure compensation input) there are several presets for common shooting conditions, including night (unfortunately, exposure is limited to 4 sec.).

In general, the shutter speed range from Nikon Coolpix AW130 is small – in automatic mode from 1 s to 1/1500 that, given the possibilities of the electronic shutter (1/4000 when selecting bullet shooting), looks weird.

In addition to photos, the unit removes and Full HD-video (H.264 / MPEG-4 AVC). In this mode, operate the zoom and auto focus, a function To pause, which helps not to produce many short video files.

Nikon was the first manufacturer of underwater compact cameras, but a series of AW became rather successful. Coolpix AW130 can be a good companion for fans of extreme sports, but does not claim to be the only camera in the family.

The camera has built-in memory, its volume is small – less than half a gigabyte, but he is able to help out too carried away the photographer. By simply connecting to a computer operating system recognizes the camera as a camera rather than a simple external hard drive and installs the driver. You can also transfer pictures via Wi-Fi (after selecting desired) or copy them to a memory card. In the latter case, there is an additional constraint – card must be empty. 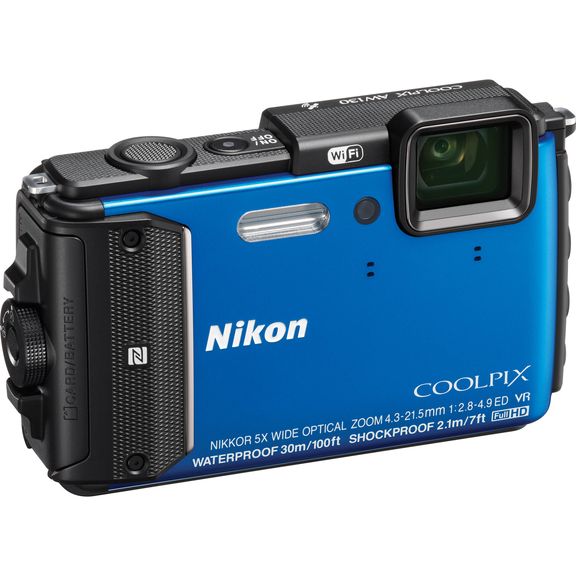 The phone has a signal receiver of satellite navigation GPS, GLONASS and QZSS. It allows not only record images in the metadata information on the location of photographing, but also maintain route as a list of coordinates obtained photographer predeterminable interval. The camera also has a barometer, altimeter and depth (information on air pressure and altitude / depth of the dive is saved in the EXIF). If necessary, the value zero can be adjusted in the altimeter.

Travelers will appreciate the built-in map of the world with the ability to save multiple points markers and sufficient detail. However, to use the device as a navigator can not – binding to the map are not carried out. Compass shows direction on the part of the world, but rather about (16 points of the compass). The manual states that the navigation data from the camera should be seen only as general information.

Since the camera Nikon Coolpix AW130 is designed for use in extreme conditions, along with the traditional way of managing it implemented a number of features to help choose the desired mode by means of small buttons, tapping on the hull or tilting it – it will be appreciated by fans of winter sports.

Nikon Coolpix AW130 is installed Wi-Fi-module to establish a connection, you can use NFC. Unfortunately, you can not remotely control the device – the wireless connection works only for transferring footage to your mobile device or PC.

The device is powered by a lithium-ion battery EN-EL12, which is charged in the camera (sold separate external memory). The manufacturer claims the opportunity to make up to 370 shots, but the actual figure depends on the style of shooting, the temperature of the ambient air / water, use of GPS, etc.

Fortunately, charging takes place via a standard USB-cable and can be carried out not only on the power supply port on the computer.

By tradition, the files from the camera’s self-scrutiny can be downloaded at this link.

Due to the absence in the immediate vicinity of Kiev ponds with clear water to assess the results of the camera according to one of the direct appointments it is not possible. It should be noted that when installing underwater mode electronics differently than in the “ground” geometry processing modes. 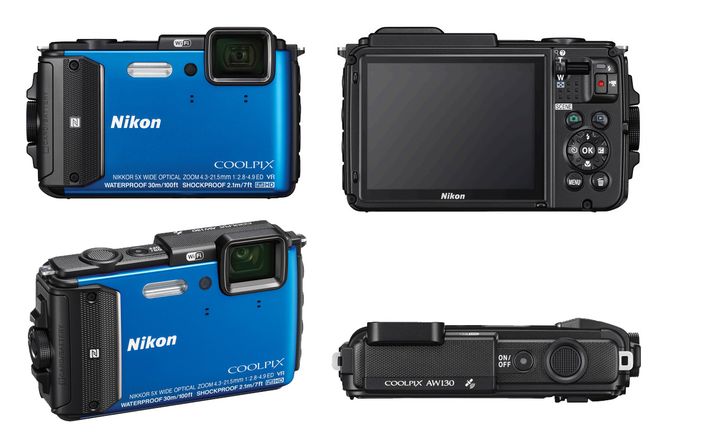 Since Nikon Coolpix AW130 is equipped with a small sensor, the technical quality of the projected frames: Electronics provides good results up to ISO 800. In this sense, it does not interfere with the sensitivity of the noise, and the restriction of dynamic range in the shadows of no significant impact. ISO 1600 can be used, followed by treatment in a graphics editor and a mandatory reduction. At ISO 3200 images are obtained on the brink of fitness.

We were pleased to work with the correct red – its saturation rate, loss of detail at ISO values of the workers there.

Auto white balance behaved strangely. On the street no major complaints, but when illuminated electroluminescent lamps in a studio unit significantly picture, although the color temperature sources clearly gravitating to a neutral white. Set up on the model – a sheet of office paper – the unit gave very similarly to the true image.

On the big screen in movies noticeable sharpening artifacts and compression, but when placed in the network and viewed on laptops, tablets, and everything looks good.

Nikon was the first manufacturer of underwater compact cameras, but a series of AW became rather successful. Nikon Coolpix AW130 can be a good companion for fans of extreme sports, but does not claim to be the only camera in the family.

– Features of the automatic white balance

– Underwater mode is hidden deep in the menu

– Wi-Fi only in the transfer of the footage