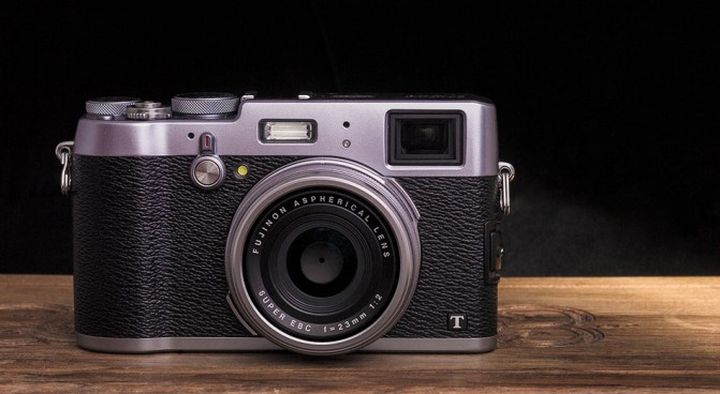 What comes to mind when the words “compact camera with replaceable optics”? Something small and amateur… This view was relevant five years ago, and it is for the high-tech industry is a huge time. Today, having played in “reflex and Soap”, manufacturers offer a really interesting model.

Category of compact cameras with replaceable optics today is very diverse. It includes devices with high-aperture optics and small matrix “inch” models and quite unfamiliar to the general public with a large camera arrays and lenses with fixed focal length.

For the sake of historical justice, it should be noted that Fujifilm does not belong to the championship in entering the market with unusual for the parameters of the digital era – a non-replaceable lens with a fixed focal length and a large matrix. Perhaps the palm formally belongs Sigma DP1, announced back in 2006, however, it was more beautiful toy (4 apertures, the lack of a viewfinder, specific control).

The first serious bid for success was Leica X1 2009. The only significant disadvantage in terms of equipment – the lack of a viewfinder. The price tag of $ 2,000, even amid the global crisis did not seem challenging, the brand has positioned itself as a premium and do not hesitate to ask for $ 6-7 thousand. For rangefinder devices.

Fujifilm has become one of the sensations of Photokina 2010 X100 camera. This is a wonderful device, it is very easy to use, with a minimum of childhood diseases. At the time of it surpasses competitors in an equipment (the famous hybrid viewfinder, full manual exposure control with excellent implementation) and gave them a head start in price.

The camera was so successful that it continues to be produced until now, however, already in the third edition.

Although this maxim and became a template, but worth repeating: Fujifilm X100 yield significant impact on the industry in terms of design aids. Extreme retro – if implemented correctly – can become a trend.

External changes compared to the previous models virtually none.

Drive right job exposure, exposure compensation, aperture in place. In the center of the Shutter button – threaded socket for mechanical.

Letter about the other lens. The shape of the buttons on the rear panel has become round, it looks fresh. A careful comparison revealed facts movement keys (and their reassignment). Disappeared scroll wheel around the five-way joystick.

I had the experience of shooting all the previous models. The layout of the buttons Fujifilm H100T – the best.

First, the menu button drive modes (Drive) was under the thumb, and now the main manipulation can be done with one hand.

Secondly, the functionality of seven (!) Buttons reassigned through the menu and very flexible – from, such as white balance, to the exotic such as face recognition, only about three dozen. To be honest, I do not remember so much … The company, which will offer the first mini-display to show the current function of each function key (for example, based on e-paper) widely respected. As the number of assignable buttons and hit five-way joystick.

If someone is a projection on the front panel seems a little (I’m with them, would agree), then Fujifilm has pad-holder MHG-X100. It captures and bottom panel is screwed to the tripod, leaving access to the battery compartment and memory card. In the hands, I have not kept, but judging by the pictures, as a bonus buyer receives offset tripod socket closer to the optical axis of the lens and the center of mass of the camera.

The only significant complaint about the design and ease of shooting – screen on the rear panel. At this angle of lens custom camera angles can a good way to build interesting frame.

Yes, compared to the size of the X100s screen diagonal increased slightly but limit the growth of the vertical size has already been reached.

There is also entirely black version. An amateur. Personally, I prefer it a classic, two-tone body.

In order not to reinvent the scale of significant improvement compared with the previous model will try to arrange them in order of the shooting process. First we see a future frame (viewfinder), then projects the image on the lens matrix, then there are processes determine the exposure / focus is achieved, then in the case enters the matrix and the processor, the result is stored on a memory card and displayed on the rear screen.

Hybrid Viewfinder, a real jewel of the series X100, just got better.

In the optical mode, the bottom right corner, which is useless when cropping (where the lens is visible), you can now use. There is projected enlarged portion of the image of the AF point for the visual evaluation of the quality focus.

For easy selection of the display, mode has been redesigned switch located on the front panel. In previous versions, he had only turned in one direction and it cyclically varying optical and electronic modes.

Now position two. Right (looking through the viewfinder) is still cycles through the optical and electronic modes. Left and cyclically-show or hide the zoomed image.

In manual focus, image Digita Split Screen can be displayed in the lower right corner of the optical viewfinder. Feeling almost like working with analog cameras, only the location of the “digital wedges” unusual. In the electronic viewfinder is centered in the frame.

This short video shows how it happens in practice.

Fujinon lens optical scheme has been very successful, and it remains unchanged since the release of the first model series. What improved? Manual aperture control. Previously step change was the whole stage exposure in Fujifilm X100T he reduced to ⅓. Division of the body did not appear, but they are not needed – the value is displayed in the viewfinder or on the rear display and the touch is distinctly felt a click.

In X100T appeared electronic shutter with incredible fast shutter speed 1/32000. Zero is not superfluous, thirty-two thousandths of a second. Because of the implementation of the shoot moving objects is not recommended because of the resulting geometric distortion.

The car was traveling about 40-60 km / h. Walking man distorted by.

Electronic shutter with a fast shutter speeds and built-in neutral density filter lens into three stages allow you to shoot at the bright sun on the beach or in the snow-covered virgin when the diaphragm 2.

X100T divides the matrix with the current flagship of the Fujifilm X-T1. 16 megapixels is more than enough to see 4K TVs provided low-energy crop.

Phase sensors embedded in the matrix, significantly increased the speed of AF compared with the X100, X100s but the owners need not worry.

This is how the automatic focus.

AF points are located throughout the area of the screen and their size regulated. Thanks to reprogram the buttons to change the current point can be in one hand: if you assign one of the five-way joystick buttons, the first press will include the appropriate mode, and the second and subsequent longer will move the point area of the frame. 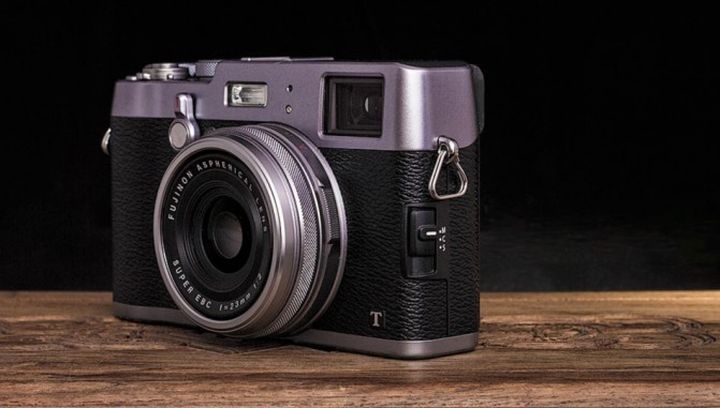 Metering area now can be linked to the AF point. Useful stuff, if changes in brightness coincide with the storyline.

Speed burst shooting according to the manufacturer is 6 K / s. When using a fast memory card, such as a Kingston 64 GB SDXC UHS-I U3 camera confirms the declared characteristics. After the exhaustion of the buffer (I turned up to 8 frames RAW + JPEG) speed drops to about 1 K / s, but the picture is not interrupted. The buffer is released very quickly, and the camera can continue to use.

Image quality will be discussed in the next section, we will continue to improve transfer. The size of the rear LCD screen has increased due to the shift of proportions by photographic standard cinematic. Diagonal become three inches, the main thing – to increase the density of pixels. Now the image is formed with a tail million items, get a picture of 720×480 pixels.

Raw files from the camera can be downloaded at this link. They are made with zero setting color, sharpness, light and shadows, noise reduction (except for noise reduction at slow shutter speeds).

Share your thoughts. ISO 1600 – absolutely working the sensitivity. 3200 basically working, 6400 – Working with reservations. They are not so much the noise level, this is no problem. Occurs some narrowing of the dynamic range and loss of detail, particularly in the shadows. And it does not matter much whether it was light or not enough.

Since the shooting in RAW is limited to ISO 6400, direct conclusions about the usefulness of the values 12800 and 25600 are difficult. ISO 51200 clearly seems marketing value. From RAW at ISO 3200 and underexposure three stages (conditionally – the equivalent of 25,600), you can get an acceptable image for screen viewing or printing up to 13×18 format. Minus two degrees, the camera can withstand very worthy.

Of particular note feature film stimulating colors. In Fujifilm X100T set expanded: Classic Chrome is not named for licensing and patent reasons, some vintage Kodak Chrome. For the first time in the industry, Adobe has included the relevant sections in the ACR. 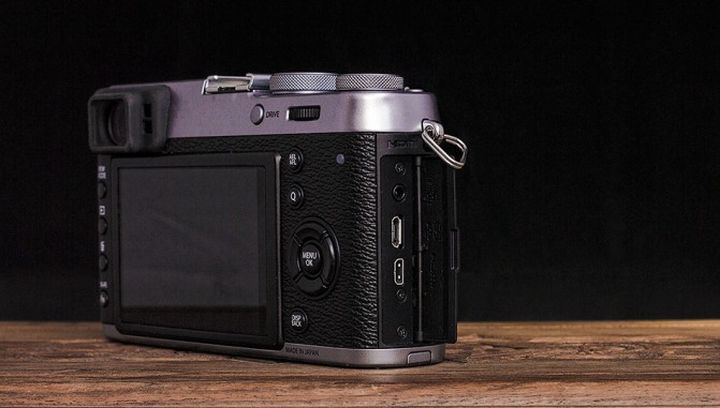 The camera is powered by a rechargeable battery NP-95 1800 mAh 3.6V and voltage

One charge enough (according to the manufacturer) to 330 shots under normal usage patterns or up to 700 in the power-saving mode, ie, with disabled screen when using the optical viewfinder. An impressive figure.

The device performed well in February frosts. Radical drop tank is not noticed. After fifty street shots and about the same number of shots made with fill-in flash and studio test series there is still one notch on the display. Total 150 frames, viewing footage was thorough.

And now – the most pleasant. The battery can be charged inside the camera via USB. In other words, any paperback, car charger for smart phone, even the modern TV in the hotel, not to mention the laptop will be able to replenish power. In this vast ointment is a fly in the ointment – while charging the camera should be turned off.

According to the latest fashion, the camera is equipped with a Wi-Fi-module. He decides to three useful tasks – provides remote control shooting and shooting itself takes footage from the camera to your smartphone / tablet for later viewing / mailing / placement in social networks and the like, and transmits the camera to save geodata in pictures. 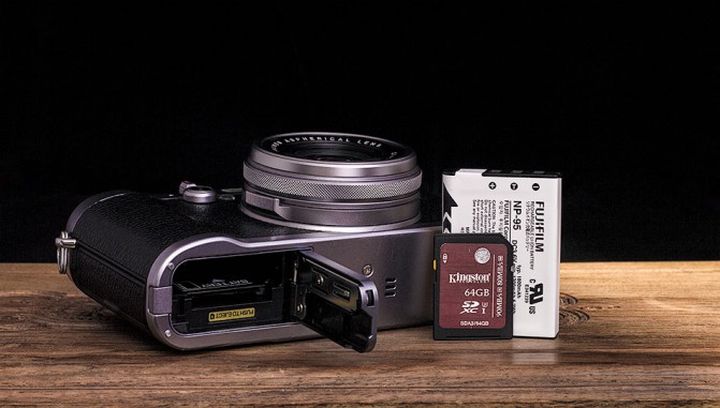 On the mobile device, you can change the basic parameters of the shooting. I can not say that the realization of the ideal, to the logic of the ligament camera / application to get used.

I liked the camera Fujifilm X100T. Yes, it is expensive costs, it’s a serious genre and technical limitations associated with the focal length of the lens and its non-replaceable. But believe me, the pleasure you get from both the process and the outcome. I must admit that 35 mm – not my focus. Here are 28 and 50 closer to me, but Fujifilm offers a proprietary optical attachment, giving the equivalent of these focal lengths.

High-quality images in a wide range of sensitivity

– Comes with no hood