Here is an overview of the tablet from the company Lenovo, which stands an unusual hybrid format, huge 13 “screen and built-in projector. Lenovo Yoga Tablet 2 Pro – met!

In 2013, Lenovo launched the sale of the first tablet with a unique design, it differs from all members of the market by the presence of a special stand that lets you use the tablet in different configurations for different usage models. In October 2014 saw the light of the representative of the entire line flagship, the largest and most tricked – Lenovo Yoga Tablet 2 Pro.

Supplied Lenovo Yoga Tablet 2 Pro pleasantly surprised. In addition to the tablet, in the box you will find a power adapter, USB cable, headphones, JBL, and microfibre cloth to clean the screen.

The range of Yoga, of course, is a breath of fresh air in the tablet market in terms of design. The presence of unique coasters highlights this tablet among others. Lenovo Yoga Tablet 2 Pro has a nice shape, looks nice, strictly, accurately and original.

Let’s start with the main constructive chips Lenovo Yoga Tablet 2 Pro – stand. Firstly, it allows you to use your tablet in four different positions – a book, a keyboard, and a picture of the console. Secondly, the design has a unique set of the battery cradle, thereby reducing the thickness of the tablet shell. And thirdly, in the thickening complete hiding projector that is capable of outputting image size of 50 “to the wall or any other surface, preferably white. Large front panel Lenovo Yoga Tablet 2 Pro is conventionally divided into two parts. The top, with black frame and silver trim, along a front camera with a light sensor and a screen that covered by the protective glass. Keys is not here, they traditionally tablet Lenovo, onscreen. At the bottom of the sides are the front stereo speaker from JBL, and the center is a metal adjustable stand.

The right side has contained a microphone, as well as one of the main chip devices – projector, next is a button that turns it on. Located on the left side volume rocker, microUSB input, headphone jack, and a round lock button, which is located in the stand, around her, by the way, is the LED.

The back cover Lenovo Yoga Tablet 2 Pro has a pleasant texture to the touch, which gives the impression of a seemingly resistant to scratches, looks attractive. Located in the center of the logo Lenovo, aside from it is a label that says that this tablet is set processor Intel. From bottom in the convex region is located built-in subwoofer, camera lens, as well as a button that lets you tilt the stand in this area can be found covered with a lid slot for memory card. In the lower left-hand corner are the focus of the projector.

Looking at the complex structure Yoga Tablet Lenovo engineers would like to applaud for the wonderful assembly. The tablet does not flex or creaks, it is assembled with high quality and it felt good.

Lenovo Yoga Tablet 2 Pro differs from 99% of tablets because of the three parameters – the cylindrical region below, 13 “screen, and the weight of 950 grams. All this is not very good effect on the portable device. Although its characteristics it can be called relatively compact, but in comparison to the plates with smaller diagonals, Yoga Tablet looks giant, after which the 10 “tablet look just tiny.

Because of its size, this tablet is not suitable for everyone and not for all kinds of tasks it will be convenient. Play it uncomfortable, print, despite such a large screen size, too. A lot of fun here gives reading, browsing and watching videos on such a large screen to do it comfortably. By purchasing this tablet, you should know that for convenient use next should be relatively much space. So you can not think about how to use it on the subway or in a lecture where on the table are still pens, notebooks, etc.

Screen Tablet Lenovo Yoga Tablet 2 Pro is really pleasing to the eye, not only a large screen and high resolution, and excellent color reproduction. The display is moderately rich, natural color, and the picture itself quite clearly. Not very well, perhaps, a representation of black, here it goes gray tones.

Oleophobic coating is very high quality, prints and stains are going not too happy, but if they are still there, for their removal does not have to exert much effort. Viewing angles are not ideal, but at a decent level, the picture is slightly distorted only with a strong slope. Stock average brightness of the device, the winter sun it will not be a big obstacle, but here in the summer on the street is likely to work with the tablet is not very convenient. Interesting, but not quite clear feature is the opportunity to work with the tablet in gloves.

When working with Yoga Tablet, I found two things that I am concerned. The first is that under strong pressure display can go in waves at the edges, and the second is in the sensor, the fact that he sometimes “forgets” to recognize depression, especially if they are going to turn.

All simple program Yoga works smartly and smoothly, etc. With the system elements (opening CO, curtains parameters) sometimes have problems with speed and smoothness. In heavy graphics games offered for low or average in Dead Trigger 2, all works quickly, Asphalt 8 podlagivaet, Real Racing 3 is no problem, but with terrible graphics.

Overall performance is good, but sometimes stumbles tablet, sometimes where from him did not expect.

Nearly 10,000 mAh is not a joke, but do not expect there some transcendent figures of autonomy, yet there is something to use as much battery capacity. When mixed load tablet will last about a day at a moderate 2-3 days. Hours screen is approximately 4-5 hours. If you use the projector, then the index will be a little less.

Built-in power manager allows a little creative with power to get the best indicators of autonomy.

13-inch tablet, this is probably the most strange device that can take pictures. Despite this, Lenovo has equipped the Yoga Tablet relatively good rear camera. For easy creation of self tablet can be put in console mode, so that during the shooting did not hold on almost kilogram weight of the device. The quality of images on frontalku acceptable, but the movement is easy to lose the detail photos. 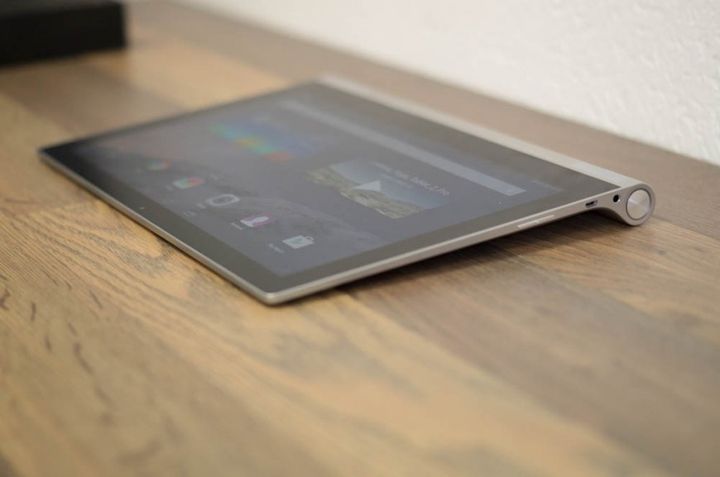 Brand application “camera” has a very good position and easy operation. To easily create photo can turn the grid and the level of the horizon. To adjust the recording, you can choose from a number of subjects, manually configure the basic picture settings, white balance, etc.

Here at this point the full beauty – here you and the front stereo speakers, and a subwoofer from JBl 5W and audio technology Dolby Audio, and Wolfson Master Hi-Fi. Full stuffing, as they say. Sound quality, and a decent amount of depth, an adequate supply of volume and rich sound settings – it all fit in the Lenovo Yoga Tablet 2 Pro.

Separately, I want to tell you about one of the main pieces of the tablet – the projector. As happens in the world of IT, hybrid devices do not always get enough quality, but it can not be said about the hero of our review. The combination of the projector and the tablet turned out really good and useful.

Personally, I almost always watch movies on the laptop, the TV in my room there, and buy a separate projector is not an option. Built-in Yoga Tablet projector has become a very elegant solution – not only that it works longer than conventional portable projectors, so still no noise and is not heated.

In good, for the projection of images onto a wall, you need to put the tablet to “Keyboard”, but due to the nature of the room I could not do that, so I decided to do more interesting. Leaning on a pillow plate, I turned on the projector and the image sent directly to the ceiling. It really looks spectacular when you’re lying on the bed, and on you 50-inch screen, the resolution of the image in this case is 854 x 480.

First of all, I am struck by an updated interface shell from Lenovo – System refreshed, became nicer and a little iOS-like. There is a duality, because sometimes there are beautiful, original icons and sometimes srisovku elements almost 1 to 1 with iOS. Why? I do not know, it does no credit to the designers Lenovo. Do not argue, nice app, but if the user wanted to see iOS, it probably would have bought the iPad, and Android tablet still want to see the applications that are made according to the guideline Google. 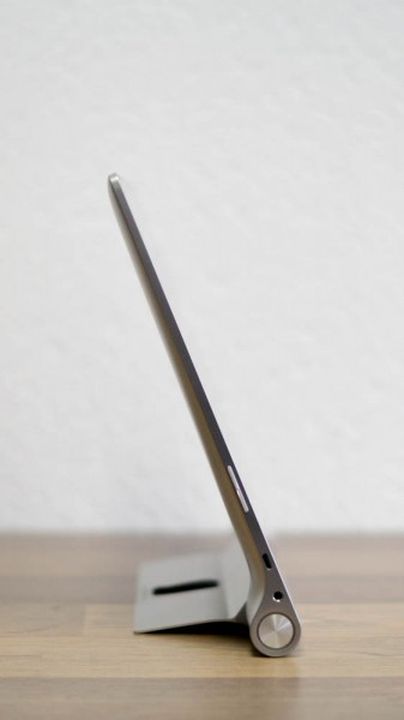 Standard launcher, again, pays tribute to iOS, because there is no application menu, all programs and folders scattered on desktops. Launcher, by the way, has a large number of settings, from gestures to intellectual classification icons. Notifications and fast rasbrosany parameters on two different panels that are located above and below, respectively.

Upset that the developers shell is not very much taken care of in order to effectively use a large screen size. Of course, there is a multi-window mode (supports up to 4 applications at the same time), there is even a mode window in the window. The problem is that all of these chips only support 6 standard applications.

To adjust the picture and sound are a special smart panel, depending on the mode you use, it adjusts the color balance and sound mode.

In terms of the stability of the shell shows itself on the positive side, all the time departures applications I did not have, only once has failed desktop, refusing to scroll, the problem was solved reboot.

Especially for the hero of our review Lenovo released corporate cover envelope. It has pretty colors, made with high quality and comfortable to hold. Cover cover on the magnet. On the sides are made cutouts for the lock button and the projector. Conveniently, but not always reliable, for example, when the tablet is in a bag with other items I would like to projector is fully protected. Included with the cover are a nice bonus – the film on the display and another cloth to wipe the screen. 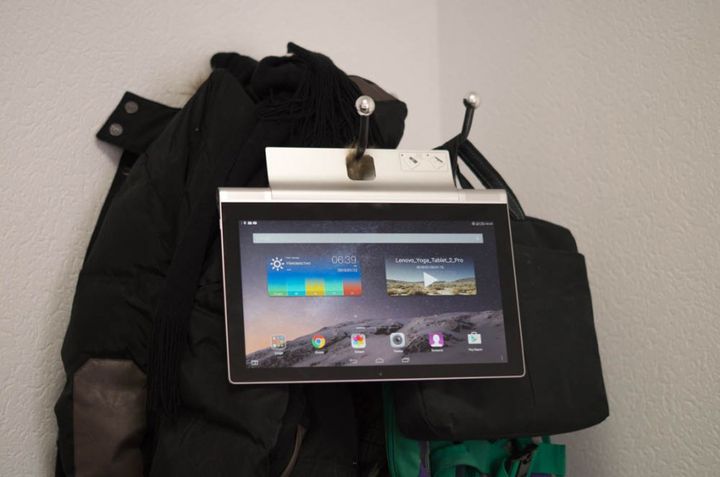 Lenovo Yoga Tablet 2 Pro to get the device, where all the attention is focused on the main feature. Large 13″ screen displays high-quality and nice looking picture, stereo speakers crammed with a variety of technologies and work in pairs subwoofer JBL, so that the sound here is excellent, the projector does its job perfectly. In general, all “kilerfichi” work as expected. But not the best optimization software under iron resulted in some problems with performance and smoothness. The shell uses the most mediocre diagonal screen, offering a minimum set of tools for multi-tasking. Standalone device leaves much to be desired, add an hour or two or three of the screen and would have no problems, but 4-6, in my opinion, is not enough.

Tablet 2 Pro – a niche ultimate-device, where all the maximum, but not everyone in this very maximum needs. With its use of this tablet, I would have enjoyed watching movies on it, the task it copes perfectly well. If someone is thinking about this device as a substitute for a laptop, it is not serious, the tablet can not cope with this role. I can not recommend this tablet to the people who often consume media and agree to put up with the large dimensions of the device.