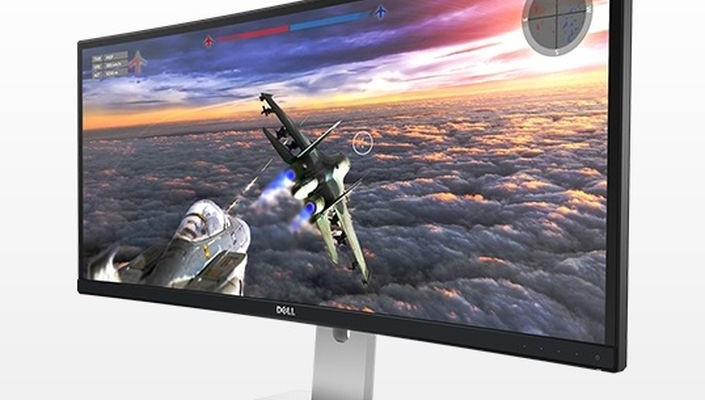 Monitors cinematic aspect ratio of 21: 9, for all its virtues, not devoid of unpleasant drawbacks – the image on the edges of the screen is significantly farther from the eye than in the center, plus the angle at which the user is looking at it, also markedly different from the perpendicular. This is especially true for models with maximum currently 34 inches diagonal – so the appearance of these monitors with curved screen surface can only be welcomed. Interestingly, by the way, that Dell did not release the flat model with such characteristics and immediately “went” to the curved – Dell U3415W.

In terms of design Dell has been and remains in a good conservative company – look line monitor UltraSharp, though gradually changing over the years, but is still recognizable at first glance; Affiliation Dell U3415W it becomes visible at once – a practical matt plastic business combination of black and silver colors and characteristic stand unequivocally say that in front of us – the new monitor series Dell UltraSharp. 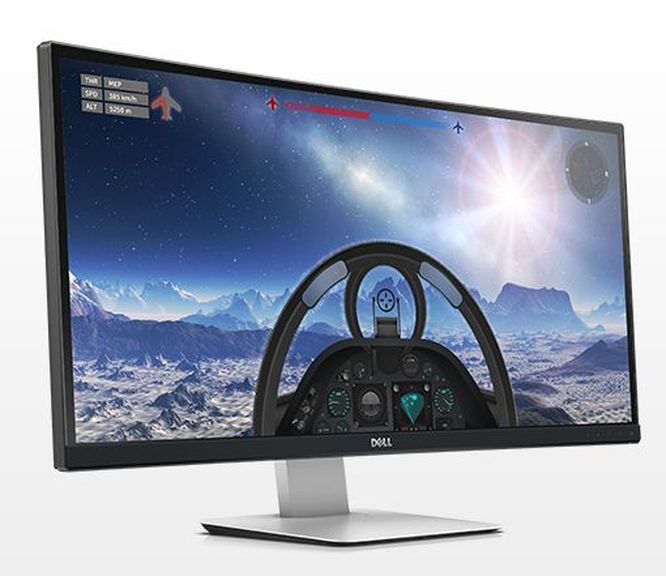 Dell U3415W made in frameless design ( the frame around the image usually is, but the entire front panel is covered with protective glass, because of which the frame becomes noticeable only during operation).

Stand – the standard for Dell Monitors of the new lines, such as we have seen, for example, Dell U2414H and Dell UP2414Q. It is rectangular in shape, relatively small (especially for supporting a screen diagonally) and thin, standing on legs and rubberized non-slip on the table. Fixing the screen to the leg – a reliable and tough to shake the screen can only be the minimum and then only if specifically ask for such a purpose; in normal use – when you adjust its position, or menu navigation – the screen is almost swinging.

All connections are located in a special niche (which can be covered by a special cover) and are oriented downward. Here you can find 2 ports HDMI (one of which is combined with MHL), 2-port DisplayPort – a full-size and mini, DP-output (for connecting to multiple monitors “chain”), in the form of audio minijack and 2 USB-hub with four ports USB 3.0.

Traditionally, U-line, here there is the ability to adjust the angle of the screen height, and rotation about its axis; is to be expected that in such proportions (and the curvature of the screen) transfer to portrait mode at Dell U3415W not. Under mounting feet to the screen hides a VESA-compliant mount (100×100 mm) for mounting the display on the wall.

Control keys from Dell U3415W – sensor located on the front panel on the right, next to a touch button, and marked inconspicuous gray dots without any notation. If you touch any of them there quick menu containing two programmable points (default they are assigned adjusting the volume and variety of video input), and the main menu.

In the first section of the main menu is “Brightness / Contrast”, then “Input Source” (believe in explanations of these items do not need). Next on the list is “color” – here you can choose the color format (RGB / YPbPr), range (PC / Mac, ie 2.2 / 1.8) and one of the preset video modes (Standard, Multimedia, Movie, etc. ).

In the section “Display” you can select the screen size, adjust the sharpness, dynamic contrast enable (not available in all modes), and include use overdrive to compensate for uneven illumination (hiding in paragraph titled – Features of localization, as in English version of his name correctly, Uniformity Compensation). The section contains the PBP mode setting “frame-in-frame / frame-close-to-the-scenes” – here you can select the signal sources, the position of the second frame, and change the contrast of one of the frames.

“Selecting USB” allows you to assign two existing USB-hub to two different computers connected to different video inputs in “Audio” allows you to select the audio source and adjust the volume of the built-in speakers (with a capacity of 9 watts each). Section “Power” (which probably should be called “energy saving”) contains a sub-indicator button to turn off the power and USB ports on standby. In “Menu” you can select the interface language, the degree of transparency of the menu and the time to turn it off in the “Personalization” – to reassign two programmable buttons in the quick menu and in the “other” – disable sound pressing and reset all settings to factory defaults .

The technical characteristics of the manufacturer does not indicate the radius of curvature of the screen, however, according to unofficial information, it is 3.8 meters – is slightly different from the range of other curved monitors who visited us at the office. Visually, these data are similar to the truth – “concave” relatively small and seem to face the same or quite a bit larger than the recently reviewed Samsung S27E591C (whose passport this option is 4 meters). When viewed from the crimp from Dell U3415W seems to be more pronounced, but this effect is clearly enhanced by the huge diagonal and cinematic aspect ratio of the screen. In normal use, as practice shows, the user hardly notices that the screen of the monitor – is not flat; rather, it causes no adverse sensations, but a positive effect on the edges of the image are close to the user (which at this diagonally spaced about 80 cm apart), there is even. At this size, the screen image on a flat surface starts subjectively distorted – the central part of the much closer to the eyes, and, therefore, seems the most periphery – further, and look at it falls is not at a right angle; as a result the user begins to seem that the image is slightly convex, and it is this effect and compensates for the concave surface of the Dell U3415W. Note that is not fully compensated, since the radius of curvature of the screen is much more typical of the distance from the head to the monitor, but the picture on a curved screen, perhaps, already will suffer from distortion.

The claimed response time of the monitor – 5 ms (GtG) in the overclocked mode, and 8 ms (GtG) – in the ordinary, which is the standard values for modern IPS-matrix. The test shows that even with off overdrive in lubricate moving objects are quite weak; when the acceleration they are reduced, but there are subtle artifacts.

Dell U3415W used semi-matte screen coating. It looks like a normal matte at a right angle but gradually becomes glossy with increasing viewing angle. This coating allows almost completely get rid of the parasitic glare and reflections, while the image does not suffer from the effect of the crystal caused by conventional anti-glare matte display (looks like a light grainy on plain areas of the image), which can be seen in close-up shot.

To adjust the brightness, apparently, in this model is not used PWM (or flicker frequency so high that define it “by eye” is not possible). The minimum brightness at the same time was an impressive 15 cd / m² – this is the minimum value of all the monitors we tested; at this brightness for him, you can work comfortably even in complete darkness.

Maximum (average of measurements of 35 points on the screen) – 280 cd / m², and the difference between the brightest portion (center) and the least bright (top right corner) amounted to nearly 100 cd / m². This is a rather large figure, but it is expected – given the size of the screen and used the edge backlighting. In this model, there is a mode to compensate for uneven illumination – when activated disables the ability to adjust the brightness, while this parameter is set at 173 cd / m². The difference in brightness in this mode is less than 10 cd / m² (with a larger area of the screen, it is generally in the range of 2-3 cd / m², and only in the lower part of the brightness rises slightly above, up to 180 cd / m²).

Leak backlight noticeable in the corners (considering the size of the screen and used the edge W-LED backlight, it is not surprising), but it is quite moderate and normal operation is imperceptible.

Glow-effect of moderate severity, when viewed from above at different angles on a black background appears, or silver, or purple glow – again, typical behavior of modern IPS.

This model is factory calibration mode “Standard”, which is confirmed by the results of the tests: average deltaE value is just 0.24 (at a rate of 1.0), the maximum – 1.1 (at a rate of 3.0). This is a great indicator showing that the monitor can be used for serious work with photos, even without additional adjustments and calibration. 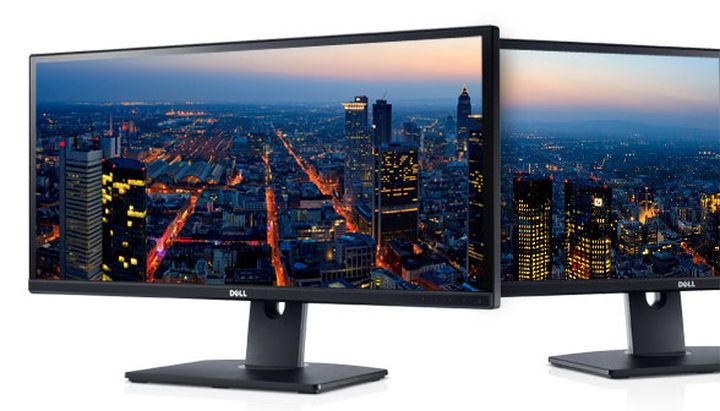 In Example, Dell U3415W becomes clear what should actually be the monitors aspect ratio 21: 9 – with great diagonal high resolution and the curved surface of the screen. Diagonal 34 inches eliminates the main disadvantage of this format – a relatively small height of the image (which have 29-inch models is comparable to that of conventional large-format monitors with a diagonal of about 23-24 inches). Resolution 3440h1440 points can be used as an effective Dell U3415W replace two-monitor configuration, since the effective area of the screen is comparable to its two monitors with a diagonal of about 20 inches, and “half” permit (1720h1440 points) is enough for any office application. Curved screen for a diagonally – not exotic and not an element of “wow factor” to attract the attention of buyers, and a real need, which significantly improves the perception of the information located on the periphery – in this case no discomfort, even at the beginning, this does not create a bend . We should also mention the factory calibration (report with the results of measurements attached to each monitor model), through which he demonstrates excellent image quality and high color accuracy. Among other, not significant but nevertheless nice feature of this model is the absence of flicker of illumination, which reduces eye fatigue after prolonged use, and having a USB-hub to simultaneously connect to two different PC.

– Special shortcomings have been identified