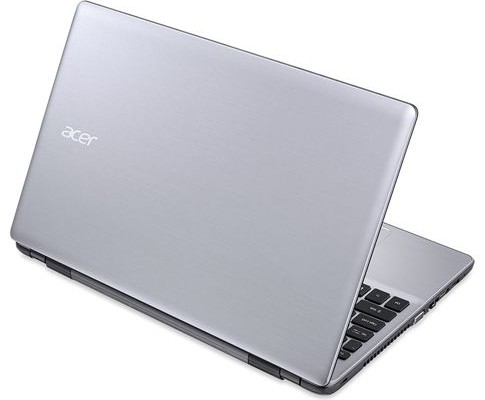 New Acer laptop 2015 Aspire V3 Series notebooks are well known and is not the first year. Now in this segment have new items, as well as updated laptops with modern processors. With one of these laptops we met. Creating Aspire V3-572G, manufacturers relied on a balance between functionality and cost. I must say that this laptop is a step higher than the normal state employees. It set a low-voltage processor fifth-generation Intel Core i5-5200U, discrete graphics NVIDIA GeForce 840M, and convenient input device. Will it achieve the perfect value for money, we learn from the review.

The laptop looks very nice, though not particularly distinguished by the classical form. Cover New Acer laptop 2015 Aspire V3-572G made of matte silver plastic, making her not show fingerprints as glossy. By the way, in the interior are two colors: silver and black. It is made in the last frame around the display, the keyboard keys. 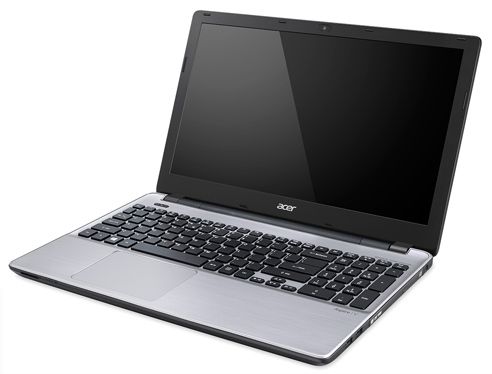 The operation of the laptop New Acer laptop 2015 Aspire V3-572G not too strong, it will withstand twisting, but with pressure will bend the cover. By the way, the laptop assembled good to see the gaps, even at close examination it will be difficult. However, it is not the laptop that will withstand changes in humidity and temperature. Also, it does not discharge from the high-impact. With regard to size 381h256.5h25-30 mm, they did not interfere with the laptop transport from place to place. Yes, and the weight of 2.5 kg is optimal for a 15.6-inch device.

Perhaps plus screen Aspire V3-572G be called a matte surface. The rest is like many other notebooks: 15.6-inch display with a resolution of 1366×768 pixels. However, there is another equipment, which is installed in Full HD-screen. The brightness of the display is that you can expect to work in the room, but its level is not enough, if you use a laptop in the sun. By the way, colors are nice, but the contrast of the picture is missing. Most frustrating unstable viewing angles, especially in the vertical direction. 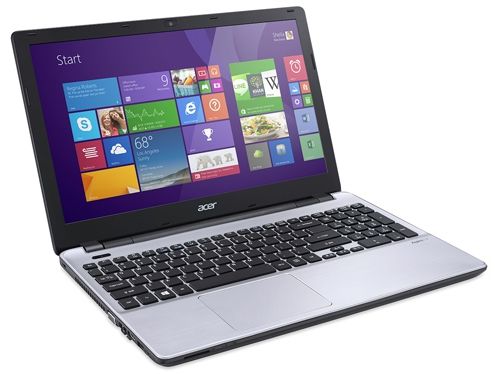 Acoustics new Acer laptop 2015 Aspire V3-572G includes two stereo speakers, there is support for technology Dolby Home Theater. Despite this sound in the laptop can be called surround a stretch. Rather, it can be characterized as monotonous, which is dominated by high frequencies. If you are picky the quality of the audio, you can comfortably listen to music or watch a movie, even without headphones. Especially since the laptop loud sounds, without grinding at the maximum.

Also, the device has a webcam with a resolution of 1.3 megapixels. It removes the bad and also helps in video conferencing via Skype.

The laptop boasts a full-size keyboard island, including the gamepad, as well as the presence of key illumination, convenient for those who work in the dark. In addition to the optimal distance between the buttons should be said about the amount of which will help to speed dial. 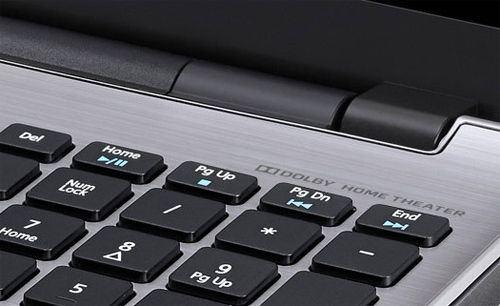 In fact, just have to get used to the block of switches, which greatly reduced. There will be no complaints in respect of labeling, it is very well seen, especially since some of the symbols on the function keys are different in color and are easy to find among the rest. 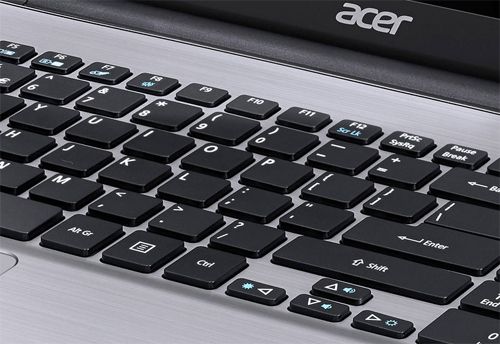 The touchpad in a new Acer laptop 2015 seems to be not only large but also quite extended. It is convenient to use, although it is significantly shifted to the left from the center. Using the touchpad, you can control the cursor, use the scroll, zoom. Also, the touchpad is a good substitute for the mouse. His right and left buttons are hidden under the panel but are quickly and accurately pressed.

New Acer laptop 2015 Aspire V3-572G-52FH works preloaded with 64-bit operating system Windows 8.1. The basis of the filling is a processor Intel Core i5-5200U, built on 14-nanometer technology architecture, Broadwell. It is equipped with two processing cores with a frequency of 2.2 GHz and a cache in the third level of 3 MB. Support various technologies allow the processor to improve the efficiency of the notebook as a whole. So, with the help of Turbo Boost clock rate can be increased up to 2.7 GHz, but thanks to Hyper-Threading will be processed at the same time four data streams. Considering that the Core i5-5200U relates to ULV-family, do not count on too high a performance. However, multimedia tasks, work with documents, it will be online, of course, by force.

Intel HD Graphics 5500 – Integrated Graphics, works in conjunction with the processor. Video accelerator supports DirectX 11.2, as well as allows you to view the image on multiple external displays. In addition, the card successfully decodes video format N.265 and, in general, the performance can be compared with NVIDIA GeForce 820M. Games with Intel HD 5500 – is not the best option, so for such entertainment is to switch to the discrete NVIDIA GeForce 840M, having 2GB DDR3 video memory and supports DirectX 11. The graphics refer to the average level, it decodes video H.264 and MPEG- 2, and it shows itself in bad games. For example, in The Evil Within, or Watch Dogs will play at medium settings with a frequency of more than 28 fps, and FIFA 15 will do fine on high with native HD-resolution.

Among the components can also be isolated to 8 GB of memory standard, DDR3L-1333. This is more than enough to cope with a variety of running applications, to ensure stability and the fast work laptop. It should be noted that under the RAM allocated two slots, so it is possible to increase up to 16 GB. By the way, all the software and other files can be stored on the HDD, the capacity of which is 1000 GB. Although the standard rotation speed of 5400 rev / min, reading and writing data to the hard disk is performed in seconds.

On the right side of the notebook has a built-in optical drive DVD ± RW Super Multi with support for Double Layer, and the power jack and two USB 2.0. 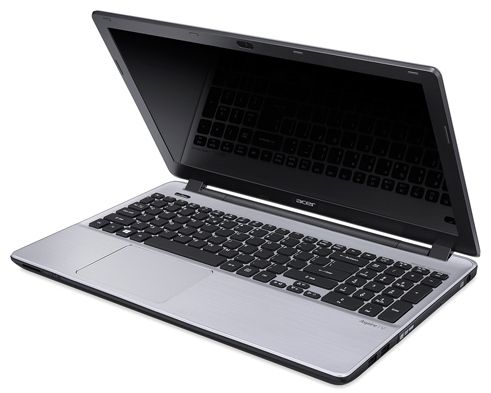 The opposite face takes VGA, HDMI, another port USB, but already the standard 3.0 and network RJ-45 connector. Close to the front end is the combined audio jack, and at the end – Kensington lock slot. In addition to the interfaces on the left side of the ventilation grille can be seen, for outputting a warm air.

6-cell lithium-ion battery in the laptop has a capacity of 4700 mAh. View online video battery discharge after 6-7 hours, but the book can be read as much as ten hours, if the switch off Wi-Fi, and significantly reduce the brightness of the display. Incidentally, the charging process takes 2-3 hours. 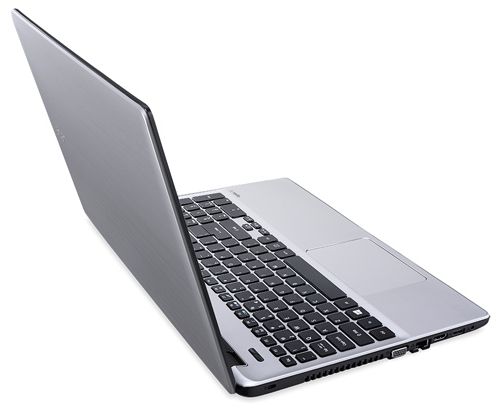 Well, to doubt the good performance of the device is not necessary. Modern filling new Acer laptop 2015 Aspire V3-572G, including a new processor and a discrete graphics accelerator Broadwell midrange GeForce 840M from NVIDIA, will cope with many problems. Therefore, you can count on that will work, and in his spare time to watch a video or play a bit. However, to judge objectively, the laptop screen is not the best, it has unstable viewing angles and insufficient brightness. And the strength of the body is not ideal. In general, the cost of up to $ 650 for this notebook is justified, but competitors with similar models as much. So for a place under the sun new Acer laptop 2015 Aspire V3-572G have to fight.