With the arrival of spring, our editors began arriving bright and memorable speaker. The first ray was an unusual wireless speaker aiia SSSSSpeaker, which we were pleasantly surprised by the appearance and form factor, and now we face multimedia speakers Edifier e25 Luna Eclipse. The latter refers to a series of Edifier Image, which, as a product of aiia, noted in one of the nominations for the iF Product Design Award. The device has a striking design and definitely deserves attention.

Select, in truth, Multimedia speakers with an unusual appearance, good sound and presence Bluetooth, and even more at the right price is very difficult. It is possible, perhaps, that, look at the Microlab H21, but it is not a competitor in a design, and basically have to choose – or the look or sound. And the more valuable to survey the model – Edifier e25 Luna Eclipse is precisely in this niche, united in all the above requirements.

Comes in bulk packaging model with a handle that looks like nothing special, everything inside is in their cells.

The kit consists of a power supply with access to 220, the speaker cable to combine columns, cable mini Jack 3,5 mm, remote control and a microfiber cloth to care.

Edifier received a design award iF Product Design Award for several models of the line Edifier Image. It belongs to the latter and Luna Eclipse, let’s see, can boast this device. To us came the red column, the manufacturer also produces the model in white, blue, black and orange. The device has at the bottom a rubber slice basis and thereby mounted on the table.

A similar cut of the ellipse can be seen in the sector, which issued a full-range speaker and tweeter with a protective arc. Approximately from the middle of the cutout is, but not simple, but with acoustic overtones – inside there are also two broadband emitters.

The design resembles a space capsule from the legendary film “2001: A Space Odyssey” by Stanley Kubrick. There will, of course, and those who look seem too pretentious, but indifferent, he just will not leave. Personally, I really liked the design, as well as the entire edition. Among the shortcomings of such a concept would like to highlight two open front of the radiator, which should take into account when buying a system in a family with a small child. 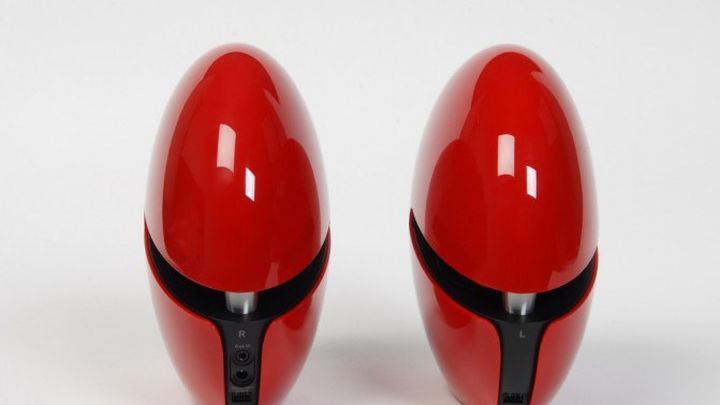 Material, as can be seen on photographs – glossy plastic. Quality at a high level, it looks nice and expensive assembly reference, nothing to complain about. But the second side of the coin, is the rapid appearance of scratches and soiled.

Transmit a signal to the column by using two methods – by using Bluetooth and 3.5mm analog cable. Listen to the model using the DAC Asus EONE MKII Muses with a test disc Prime Test CD # 1 and a personal set of songs. The sound has a velvety taste, sense of depth, softness, tranquility. This sound gave me pleasure while listening Lorde and All We Are, albums that I have played all weekend. Of Prime Test CD impressed with how they played compositions from Dire Straits – incredibly emotional, soft, warm and detailed.

Low frequencies rather emphasize that you need to consider when listening to some songs with a lot of basses. As with all speakers, very much depends on the location of the speaker. In order to achieve this sound exactly as you want, you need to experiment more than once. On all factors of the sound system is worthy in its price segment. And remember that this is not Hi-Fi, so do not expect anything extraordinary. 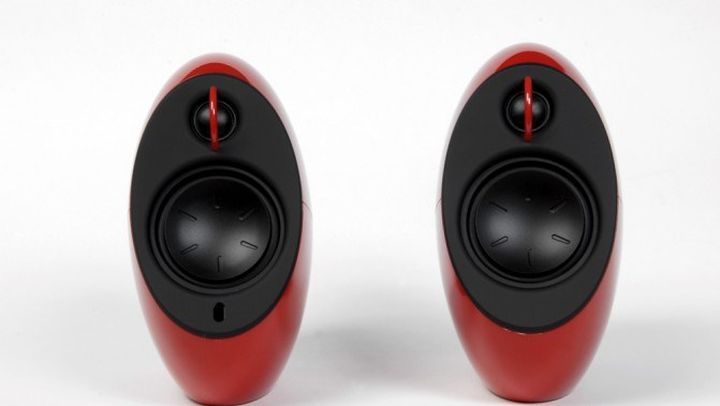 Edifier Luna Eclipse is designed for use in a pair with a computer to listen to music from your portable device in the manner of a smartphone or tablet.

As multimedia, acoustic column on the right with a bang – 3.5 mm Jack hooked up to a computer and listen on your health. Managed by the device or touch-sensitive buttons on the right-hand column, or by using the remote control.

Touch-sensitive controls make it possible to change the volume and enable / disable the column while Bluetooth-connected also switch composition. When used in tandem with the remote computer is not particularly needed, everything is regulated, or on a PC or using the buttons on the column. The console can be useful when used in acoustics for home theater or when listening to music via Bluetooth.

Bluetooth connection is very simple – you need to turn on Bluetooth on the source and create a pair, then the sound comes only from the speakers. It is a wireless option I most listened Edifier Luna Eclipse. Going home, I turned on the music from the phone and doing his chores. The apartment of 40 m2 is always the connection was stable. Even goes so that 2 concrete walls music continued to play without problems.

As Acoustic DK model comes 5+, the sound goes on fine atmospheric. Testing took place in the living room area of 11 m2 in tandem with the Media Player Asus O! Play HDP-R1. Volume is more than enough, and when quality soundtrack clearly heard any sounds come from. 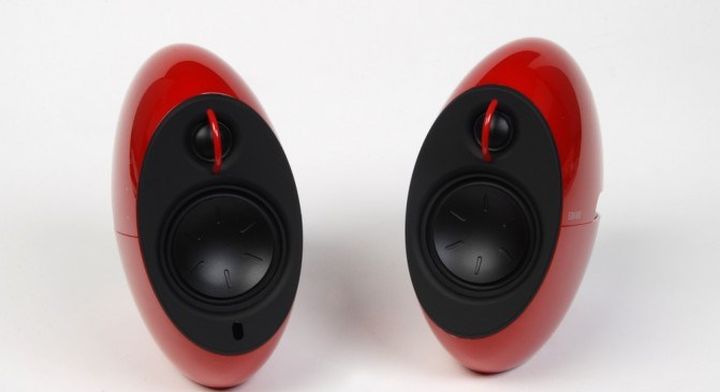 Our market is really small offers among fixed wireless speaker 2.0 format, and if here to add more factor appearance and cost up to $ 150, generally remains somewhat. Came out quite well in this segment of the market Edifier e25 Luna Eclipse, because there is almost no competition. If you are the one who needs the unusual stylish wireless speakers, but that they should thus also played well, then take a look at this model. Personally, I have to make a choice and soon plan to buy such