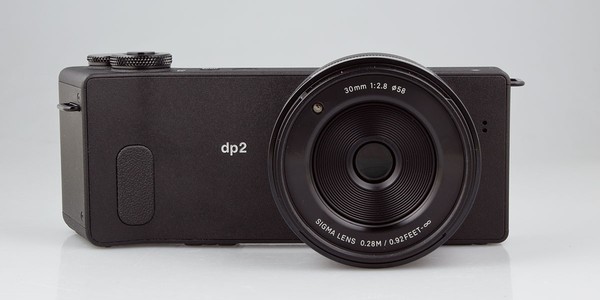 Beginnings series compact cameras Sigma DP back to 2006, when the market appeared DP1 model. Later we met a total of a dozen different versions of the camera, but all have a number of common characteristics: small, close to pocket size, prime lens, and a large array uses Foveon technology. Camera Sigma dp2 Quattro debuted at this year’s CP + in Yokohama (prepared then our”first impressions” ). Aroused considerable interest in compact shape. Compact design consigned to history – dp2 Quattro has a big body with a wide, very distinctive Grip. Us very curious about the new Foveon matrix. Let us remember that in contrast to the Bayer matrix filter, Foveon type sensor is composed of three layers arranged one above the other, each of them is responsible for the registration of one of the RGB colors. Each pixel “sees” the full information about the color of light. There is no color interpolation, which has lead to higher quality images. Initially, the matrices Foveon all the layers have the same resolution. The latest incarnation is different: the sensor has dimensions of 23.5 x 15.7 mm – upper layer has a resolution of 5424 x 3616, and the middle and lower after 2712 x 1808 photodetectors.

Sigma test comes compete with a number of advanced compacts. Among these could be mentioned such structures as: Nikon Coolpix A X100S Fujifilm, Ricoh GR, Sony Cyber-shot RX100 III, as well as bezlusterkowcami, such as the Panasonic Lumix GM1 or Sony A5000. 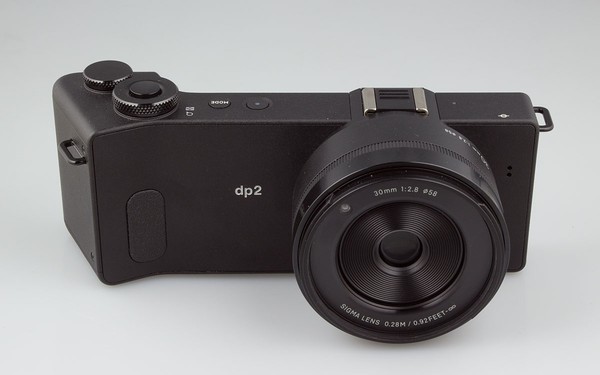 Camera Sigma dp2 Quattro attracts attention with its unusual form. Slim body ends up very big gripe. The camera is wide, has a nice lens and in no way it can be counted among the “small CDs”. Clashes a bit with the original idea of ​​the DP series, which so far appeared small cameras with large matrices and stałoogniskowymi lenses. dp2 Quattro predecessors took over only the last two features. You can not complain about the quality. Plastic, metal and rubber used to build the camera are of good quality. The fitting of individual elements is at a high level, the structure is rigid and nothing creaks.

Tested Sigma does not overwhelm an excess of buttons and other controls. On the top we have a power switch, the Mode button where you can change shooting modes, the shutter of the main control dial around him, and a second disc, which is in A mode, you can control the exposure correction. 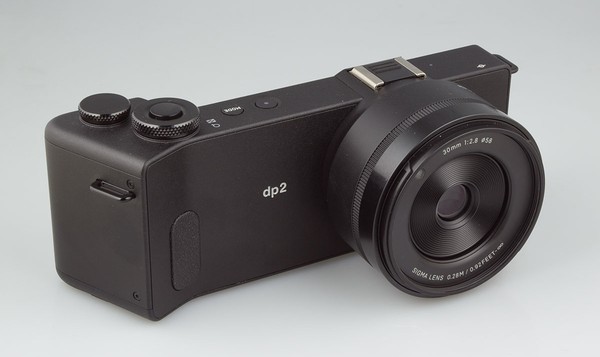 On the back buttons have been gathered on the right side of the LCD screen. At the top is responsible for disabling the screen and change the information displayed below the QS trigger pop-up menu, the AEL button in playback mode, performing the function of the basket, and the bottom two buttons: play and menu. 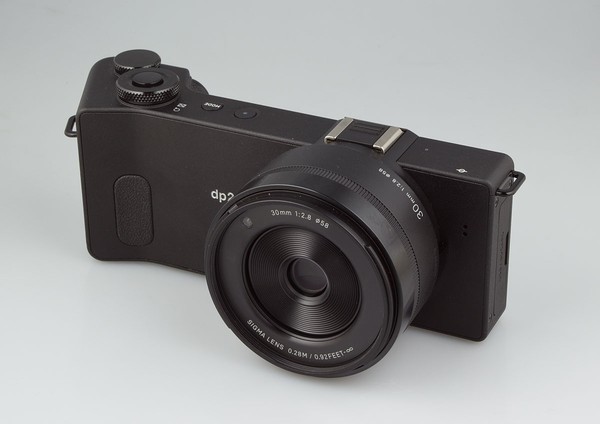 In the right part of the rear wall of the omni selector to find even with a button in the middle approved. In shooting mode, the up and down selector support functions sharpening – top switches between autofocus and manual sharpening and down allows you to select one of the nine AF points. The user can influence the content of the popup menu. In addition, the lack of function keys that can be programmed in its sole discretion.

dp2 Quattro has no viewfinder. She has a prime lens gives the equivalent of 45 millimeters, and the foot, so you can think about fitting a riflescope viewfinder. As for the screen, it is good: 3 inches, 921, 000 points of resolution. When there is a lot of light the image is bright and has good color. In difficult conditions, there is a lot of hype, but this issue after the signal from the matrix, rather than the screen itself. 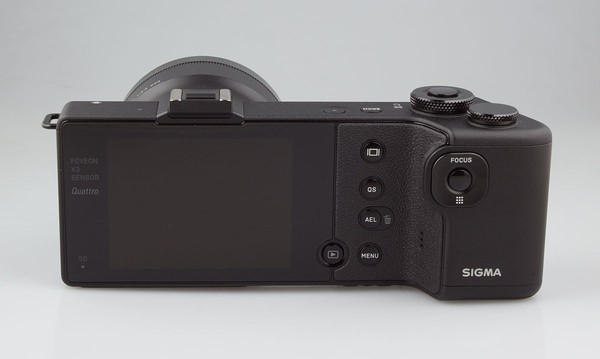 Sigma dp2 Quattro has no built-in flash. The camera is equipped with a hot shoe, which you can connect an external flash.

Battery compartment fills almost the entire grip. Battery Sigma BP-51 is 1200 mAh and during normal shooting enough for 190-230 images. It’s pretty enough, but with the camera you get two batteries and an external charger. Of course it would be convenient to have one, but two times more powerful battery, but with the demand for electricity camera well that the Japanese manufacturer thought about adding a second battery. We also like the way signaling a lack of energy from the moment the empty battery symbol appears, you can perform a few dozen photos. 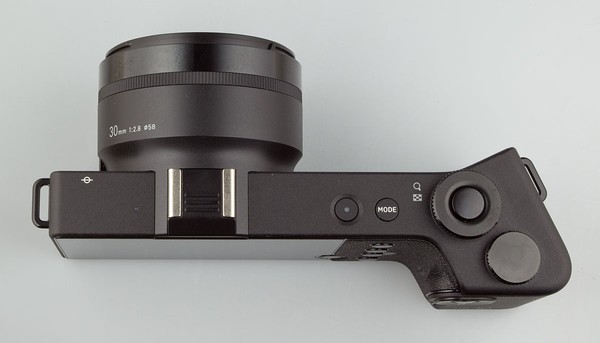 The camera stores images on SD cards with the family. Slot placed under rubber flap, along with a USB port. The need to “pry” tight the matching flip flops every time when you want to reach for the battery is annoying. There’s a reason virtually all cameras have a battery slot hidden behind the back opening with plastic doors. Minus for Sigma. 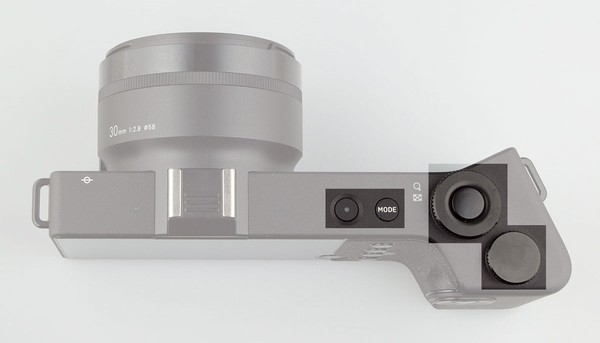 Sigma dp2 Quattro does not have a wireless Wi-Fi connectivity. In the modern Compact for the advanced user are minus. 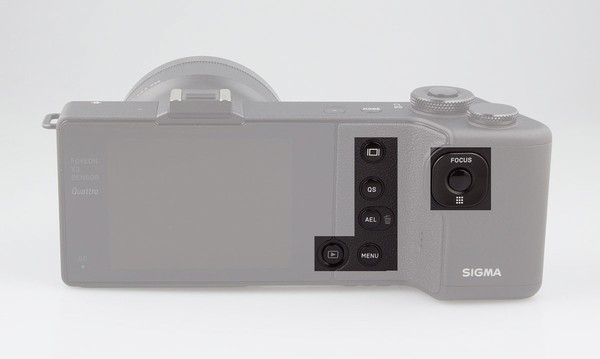 The issue of ergonomics Sigma dp2 Quattro has attracted considerable controversy. It would seem that the use of such a large Gripa will be a great opportunity to create a camera that great in the hand. But the reality is different: very deep undercut behind and shallow front causes the camera holding up very uncomfortable. Practically there is no grip, which would provide the ability to support both dial and AF point selector of time. If one holds the camera “full handful” of your index finger on the shutter button thumb reaches the second disc, but not the selector.When one holds the camera slightly lower, with only 3-4 fingers, do not we look the other disc.Operating the camera is connected to a continuous change of the handle, and yet at the end it turns out that it is best to hold the camera with your left hand on the lens, and the right only to assist. In short: the camera can take pictures, but it can not be said of him that is ergonomic. 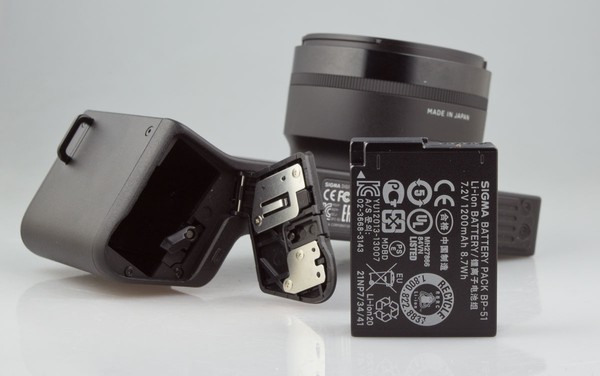 After the ergonomic advantages we can save for a comfortable menu (including a very well-designed pop-up menu). After the pop-up menu navigating using selected (selection function) and shield (choice of values ​​within a function) – simply and conveniently. 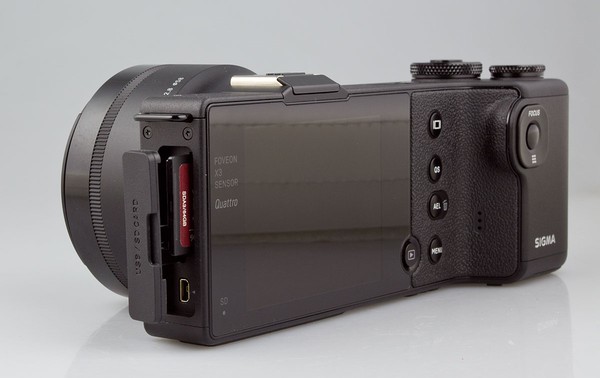 Camera Sigma dp2 Quattro arouses interest, attracts attention, stands out from the standard design, but after a closer look overlook his faults. It is well made, but it is not ergonomic. Do not hold it comfortably, making it difficult to understand in view of its considerable size. It is also not particularly well equipped. There is no built-in flash, viewfinder (even simple riflescope), Wi-Fi connectivity. Extremely irritated unusual position of the battery – the tight-fitting rubber flap. New Sigma also has a sizable appetite for electricity. Fortunately manufacturer in the set gives you two batteries and charger. + Good materials and workmanship + Included two batteries and charger + Convenient pop-up menu + Shoe – Poor ergonomics – No built-in flash – The lack of Wi-Fi connectivity – The lack of a viewfinder