Flexible displays on the market the main fight is between the two South Korean companies – Samsung and LG, although no commercial products, where such screens would apply to them as long as we have not seen. This shortcoming, according to Korean media reports, can be corrected in the near future. It is reported that Samsung is going to introduce its first smartphone with a flexible display Samsung Galaxy Round.

Announcement of the device can be held before the end of the week, that is, from 7 to 13 October 2013. If the information is true, then the novelty could be the first commercially available smartphone equipped with a flexible display on a plastic substrate. According to the developers, the use of plastic instead of glass is a more rational approach, because it provides greater strength display, and cheaper to produce, no other benefits, such as fully flexible phones with them as long as it does not carry.

What happens is for the obvious reason that the “filling” of the smartphone has more than the usual solid form. These components resemble those used in the “tablet and phone” Galaxy Note 3, for example, the chips Qualcomm Snapdragon 800. The display is based on technology Super AMOLED, has a diagonal of 5.7 inches and a resolution of 1280 x 720 pixels. The RAM is 2 GB, the resolution of the camera – 8 megapixels, the operating system will be Android 4.3. On the model will come with a stylus S Pen. 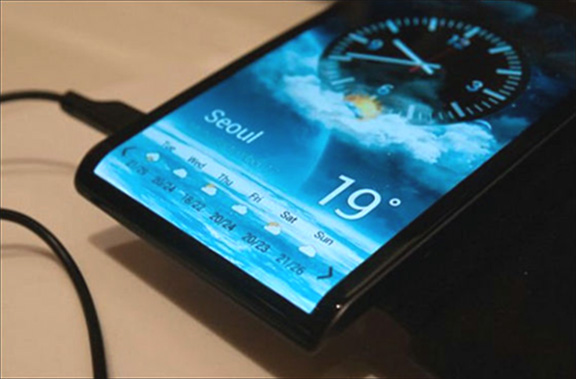 Galaxy Round Price not announced, although it is expected that the first cost of the device is very high, so it will be produced in limited quantities. As expected, first smartphone will be available in South Korea, after announcing that the device in the U.S. and Europe.

In November, for Samsung, as the manufacturer of curved smartphones, will join the company LG. Mass production of curved 6-inch display has already begun.