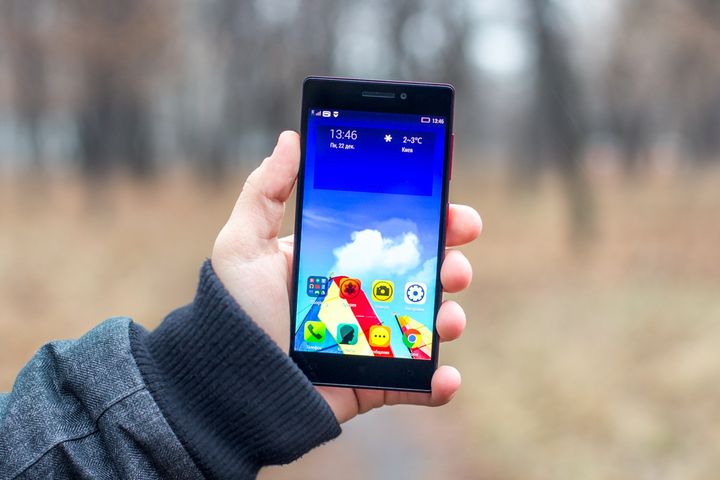 Rarely has a manufacturer may surprise unusual and memorable design your smartphone can not be said about the hero of this review – Lenovo Vibe X2. He certainly stands out for its appearance, although it is not its only trump card. In addition to the visual appeal, this 5-inch “smart” phone was powerful hardware stuffing, two good cameras and the ability to customize the body due to the unique of its kind covers. But what price request it to Lenovo and impressions of the tube, later in the review.

As for the cover, it does not increase the size of the tube and in no way hides the great design Vibe X2. It would also be nice if he acted on the body, but it’s nuances.

Model VIBE X2 belongs to the premium smartphone Lenovo and similarly Z-series was metal on the back cover. True its thickness is so small that the touch can go for plastic.

Exclusive designer note in VIBE X2 is a layered body. Four different color layers are perfectly combined together, visually reduce the thickness of the tube by a black strip at the junction with the screen and just pleasing to the eye. In our test sample shades of red juicy and rich. Looks very cool. In November, we were at the launch of this new product for Ukraine and had the opportunity to get acquainted with the “three-layer» VIBE X2 orange-gold. Another smartphone is in white and black with the corresponding colors. 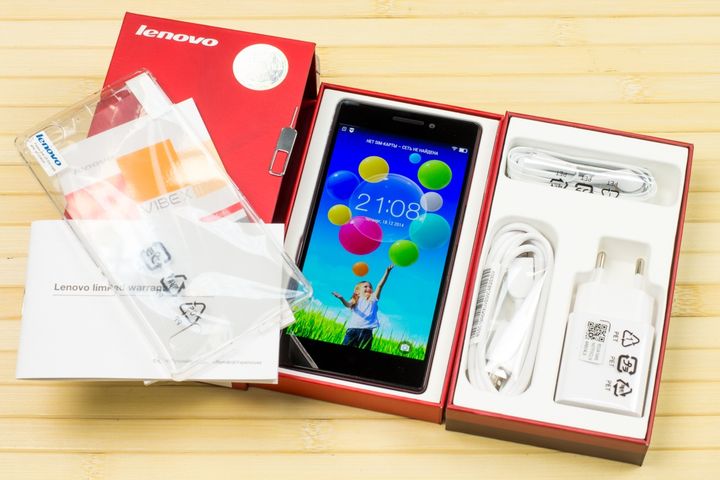 When you take the first VIBE X2 in hand, pleasantly surprised by its light weight and convenient location of the power button and volume buttons. They are both on the left and, as I thought, metal.

Material rear of the practical. He does not leave himself visible fingerprints and has a slightly rough surface – so that the smartphone in your hand does not slip. Given no small 5-inch screen with a thin side frames, one-hand operation was quite feasible, even those with medium hands. The undeniable advantage in this case is the presence of the included software and smart menu. It can be customized.

We return to the functional elements of the housing. Above the display is placed earpiece covered with black mesh, front camera, light, proximity and ambient light. Under the screen provides space for three system touch buttons. With the backlight off to recognize them is almost impossible.

On the left edge there was a place under the tray Micro SIM-card, only audio jack at the top, a bottom – microUSB port and a microphone. Another is located near the main chamber next to the flash. Below handsfree speaker and pad for connecting extensions Vibe Xtension.

It’s kind of a fourth layer, which can be an additional cover-battery (VIBE X2 Battery), prolonging the life of the gadget is 75% of the standard charge (thickness 5.1 mm) or speaker (VIBE X2 Speaker) by JBL sound with power and bass. Last, among other things, can still function as – stand.

If you go back to the hands-free speakerphone, you should say it loud and sonorous, although the bass it would not hurt to add. The earpiece transmits the caller’s voice without distortion and wheezing.

As for the smartphone test assembly, the colored layers fit together very tightly, without gaps. The only problem areas with which users may encounter during the operation VIBE X2, is the transition between the display and the first layer of the body. This step is constantly going to dust. Wiped it, in truth, it is easy even normal tissue.

As for the display VIBE X2 with Lenovo chose the 5-inch IPS-matrix with Full HD resolution. Screen I would call ideal pixel density per inch – 440. There is no hint of graininess. When working in an overabundance of sunlight information remains readable even at the maximum brightness. Anti-reflective coating is present. Viewing angles allow to work with a tube in any position.

Top screen is covered with protective glass Gorilla glass 3. During the week of the test it was not formed even the slightest scratch. It is important to note that there VIBE X2 and oleophobic coating.

Responsive sensor, can simultaneously handle up to 10 touches. A mode of operation with gloves.

The hardware part of

Smartphone easily copes with movies in high definition, and the 3D-games. Its a big enough gap and future fantasy game designers. Heating the back cover VIBE X2 while working with heavy gaming graphics small and absolutely no discomfort does not deliver. In benchmarks tube occupies positions only in the top lines. This certificate screenshots below.

Built-in memory in VIBE X2 – 32 GB memory card slot and support for USB OTG interface not. Initially, the user can use about 23 GB, the rest takes the system to fit your needs and proprietary shell VIBE 2.0, installed on top of the operating system Android 4.4.2.

VIBE 2.0 can be described as a simple and intuitive interface without the usual favorites from the list of all applications. Directly from the lock screen, you can get a camera or other parts of your downloaded application.

In addition to the already large number of pre-installed software, some of which are shareware, useful applications can be called from the tab Lenovo’s DOit. With their help, you can quickly transfer data to other devices without having to connect to the network, to optimize the productivity of your smartphone to back up your contacts, sms and call log, as well as protect yourself from viruses and other malicious software.

The capacity of the non-removable battery in this handset – 2300 mAh. The truth is, not much. To ensure VIBE X2 mode operation from morning till night had to limit the maximum display brightness to 70-80 percent. In this case, normal use of the smartphone was: half an hour of calls, watching videos on the hour, half an hour of games and music through headphones, plus about an hour – a browser and e-mail scanning. Wherein Wi-Fi is continuously enabled.

Not deprived of this unit and the special mode to save battery. Then he called the emergency and give the user the possibility of a call and send SMS. Several times I rescued it a lot.

No less interesting, and others, among them – the smart script by which you can adjust the start sequence, or enable / disable an application and functions over time.

VIBE X2 is equipped with two cameras. The first – on the 5 megapixel front. Fixed focal length lenses. It is interesting the possibility of activation of shooting touch, voice, gestures, timer or just batting an eye. 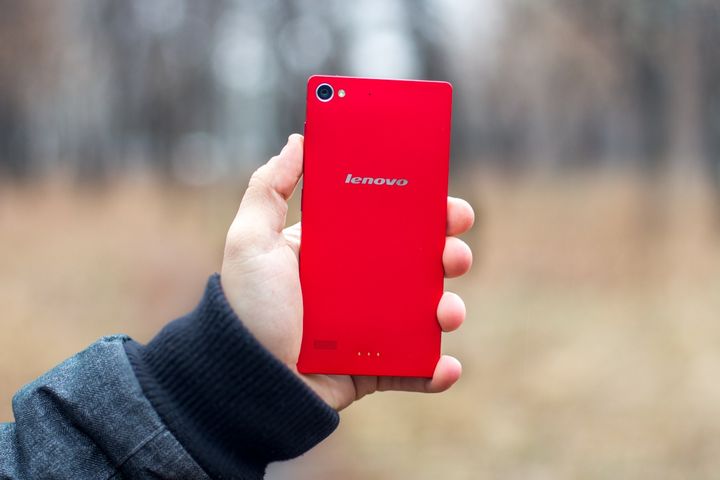 Video is written in HD and Full HD resolution. This camera will be enough for gatherings in online video format or to quickly self. Although part of the photo, it is best to contact the main PV modules.

13 megapixel camera equipped with autofocus and LED flash. The pictures are good, especially in the daytime with a sufficient amount of light. Below is the screenshot shows the main parameters and possible shooting settings. 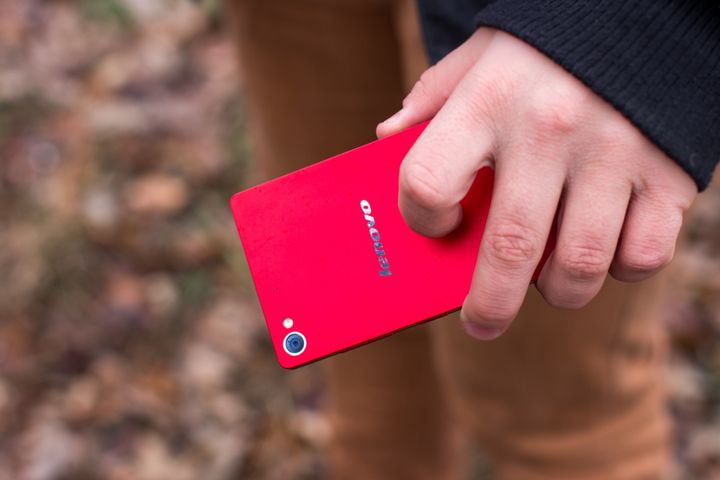 Well, VIBE X2 price in 350$ due to its unique design and excellent selection of materials, in addition to which are worthy performance and filigree assembly receives from the portal Smartphone.ua deserved award for “Best Design”.

There is still something to work manufacturer, especially in terms of autonomy, but for the pleasure of working on a 5-inch Full-HD display and 8-core processor, this nuance and can be neglected.

– Excellent on all counts screen;

– Customization by connecting cover with speaker and battery

– Cover and protective film in the package.