Microsystems of the Pioneer X-HM82 review

From what source today listen to music often? If you look around on the street, it can be concluded that with smartphones. And at home? Experienced social scientists could draw a complete picture. Where the percentage would be distributed according to the country, age, well-being and other factors.

And it is unlikely the respondents of the survey was limited to a choice of only one source of music content. It is this inclusiveness is now manufacturers should fit in this popular, especially among novice users Hi-Fi-technology product as a micro system. Let’s look closer at the new sound system.

Features of the Pioneer X-HM82

Functionality sets Pioneer X-HM82 incorporates virtually the entire spectrum of modern methods of producing music content. Starting from the FM-radio and laser discs (CD, WAV, MP3) files to HD-audio (including DSD) on the LAN. You can also connect third-party devices to the analog inputs or the TV to the optical. And built to replace him in the dynamics of the high-grade speaker.

Electronic unit – Network Receiver – With its small size, looks quite solid. Its body is made of aluminum adorns the front panel. And it is not much inferior in appearance expensive components. Large LCD display detail and clearly displays information about the parameters of the signal. And even puts an image on the screen album covers with the broadcast content from the server.

Cascade gain receiver, working in class D, provides 50 watts of power per channel. It provides wide scope for selecting columns. But those that are included, are quite good, especially considering the reasonable price so versatile microsystems. The columns come with a soft dome tweeter and midrange/woofer with Kevlar cone. Reflex port goes to the back cover, which is a bit limited options for their placement.

We liked best sounding Pioneer X-HM82 with a built-in CD-drive. It is clear, detailed and quite developed. Most pleased with the lack of sharpness on the RF and digital dryness. Album Diana Krall When I Look in Your Eyes obeys easily and happily. Singing Posted lively and expressive. When playing a CD The Massacre of the rapper 50 Cent songs celebrating the distinct layering, good rhythm, and pretty confident feeding bass lines. In a small room, the LF will be even more significant.

But the CD – it’s all the same “outgoing nature.” And the Pioneer X-HM82  provides access to other sources of content. This can be a network server that is connected the cable, and on Wi-Fi, or USB-drive. And as a gadget Apple, connected to USB-port type A on the front panel. The sound in these cases distinguishes the same smoothness, softness, but without losing the sharpness of HF and rhythm, diversity and focus. However, getting a little worse coherence and organization. But not so much that it irritated or deprived listening pleasure. And the original high-resolution files HD-Audio significantly smoothes roughness in the sound. 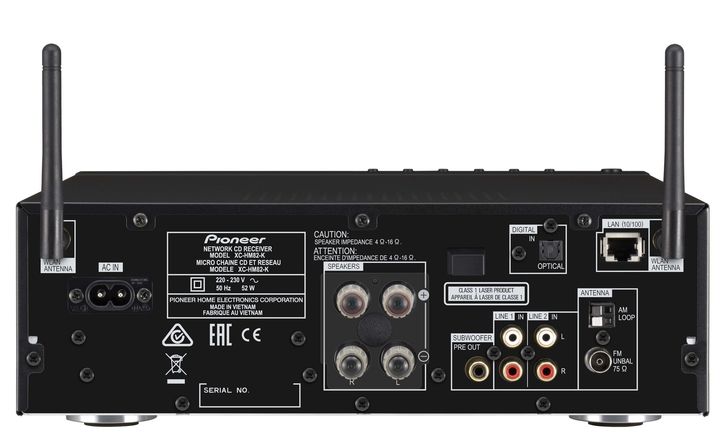 Fans have music round the clock will appreciate the opportunity to continue its consumption from your favorite smartphone at home without headphones. Even MP3-records sent via Bluetooth (with aptX), will not result in a drop in the quality of despondency – clear voice Pelagia. For example, with the sometimes bizarre vocal techniques will not disappoint fans of her work. Instrumental accompaniment is also detailed, developed and distinct.

Where better to where a little worse, Pioneer X-HM82 confidently handles all modern content sources. Not losing sight of the more traditional, which provides a complete qualitative and fatigue-sounding music. Such a wagon worth a closer look. Pioneer X-HM82 is suitable for the role of the second system in the house, and for some it may be the first step into the world of Hi-Fi.

Cons of the Pioneer X-HM82: Not sold without speakers

Conclusion of the Pioneer X-HM82

Pioneer X-HM82 has good as a second system in the house, or as a first step into the world of modern Hi-Fi.