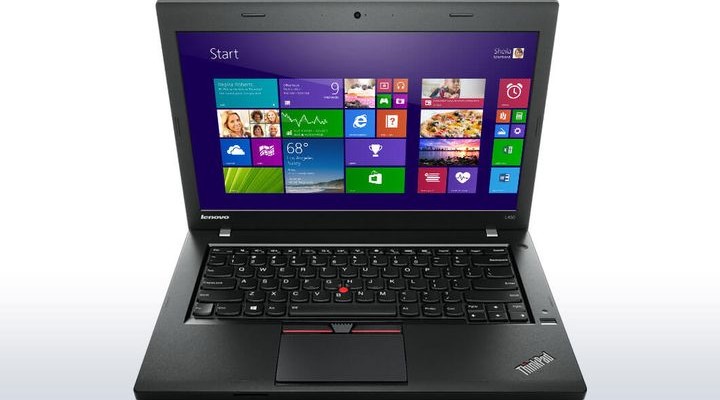 Segment ThinkPad, manufactured by Lenovo, deservedly enjoy a reputation among users all over the world. The secret of success of this line of laptops is a sturdy housing, ergonomic keyboard, which allows you to accurately typing for a long time. In addition, usually the models with the prefix in its name «ThinkPad», equipped with good filling and a good set of interfaces.

For example, new items – Lenovo ThinkPad L450 – we had the opportunity to see how well things really stand with laptops above segment. At first glance, everything is fine with the laptop: it looks stylish, the ergonomic keyboard has a sufficient number of interfaces. Let’s see how he is worthy of a more thorough check stand.

All representatives of line ThinkPad (and the hero of our review is no exception) is positioned as notebook computers, suitable for use in the office, at home, as well as for business. The construction of the device, it is unfortunately not involved metal so that the case is completely made of plastic, but supplemented with fiberglass. Despite this, the gadget does not look cheap, and not ashamed to show it, say, to business partners. An additional plus is that the matte plastic is used herein, non-staining, it can resist fingerprints, dust, and scratches. By the way, the case has been tested for strength and quality, according to US military standards. So he is not afraid of a high pressure, vibration, moisture, heat, and dust. 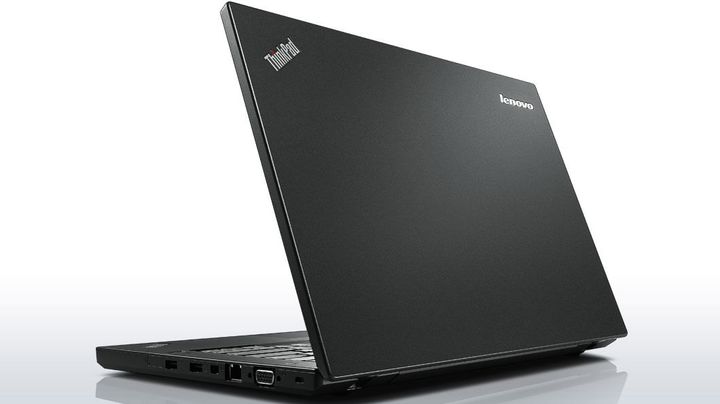 The upper part of the laptop is connected to the bottom by two metal hinges. They are moderately stiff while the cover can be opened with just one hand. By the way, about it: of the cover is decorated with two brand labels in the left and right corner, there’s nothing greater. Inside the laptop – the same minimalism, so on the top frame of the screen – a webcam, and at the bottom – another inscription «Lenovo». The keyboard looks quite compact, and the working surface is inherent in the proper paraphernalia business gadget: trackpoint, large touchpad, the fingerprint scanner.

On the bottom, you can see the six rubber feet that insure against slipping. In addition, the entire surface has a plurality of louvers. If you unscrew the cap, you can upgrade the RAM and hard drive. On the side faces uniformly spaced interfaces.

As for the build quality, something to it no special claims: in general, everything is fine, the only thing that the lid on pressure tends to sag. Observe and dimensions of the device: for example, a length of 339 mm, width – 235 mm, and the thickness – 24 mm. Weight 1.92 kg is acceptable for a 14-inch form factor, respectively, it can take even longer time to wear without feeling discomfort.

Unfortunately, the screen can not be considered a strong point not only Lenovo ThinkPad L450, and the entire line as a whole. In this case, its diagonal is 14 inches, and resolution – only HD (1366×768 pixels). Matt surface of the display, and it is struggling with bad glare. 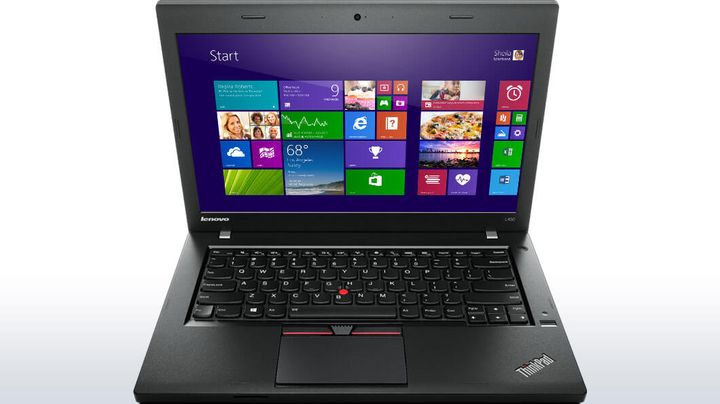 Brightness and contrast of the screen are not impressive: 215 cd / m2, and 80: 1. Color Gamut also leaves much to be desired, because compliance with the sRGB scheme is 64%, and AdobeRGB even less – 48%. Recall that the closer the values close to 100%, the more the picture quality will be. By the way, because of the TN-matrix visibility is poor, for optimal viewing will have to adjust the tilt of the display. Opening angle is 180 degrees, it will use a laptop, for example, to show the presentations that will certainly come in handy at work.

The webcam is located on the upper frame of the laptop, which has a low resolution, only 0.3 megapixels. The most that it can – video calling on Skype, no more.

On the side of the bevel, closer to the bottom, you can see two slots, under which to place the speakers. We get a good sound, but it should be noted that it lacks bass. At maximum volume no wheezing, and it acoustics can put bold plus.

The keyboard in Lenovo ThinkPad L450 – is something that deserves special attention. Let’s start with the fact that it waterproof, so accidentally spilled liquid internal components are not afraid. The working surface of the plastic, further reinforced with fiberglass, it is no flex while typing, moreover, absolutely non-marking.

Keyboard compact, however, around a lot of space, therefore, hurt nearby buttons practically impossible. Digital unit, of course, no, it is a privilege of larger models. In standard mode the keyboard, its keys are marked in white. “Hot” buttons, such as [Enter], [Shift], [Backspace], etc. – Oblong and large, very comfortable. The bulk of the keys has a concave bottom and a rounded shape characteristic of keyboards AccuType. 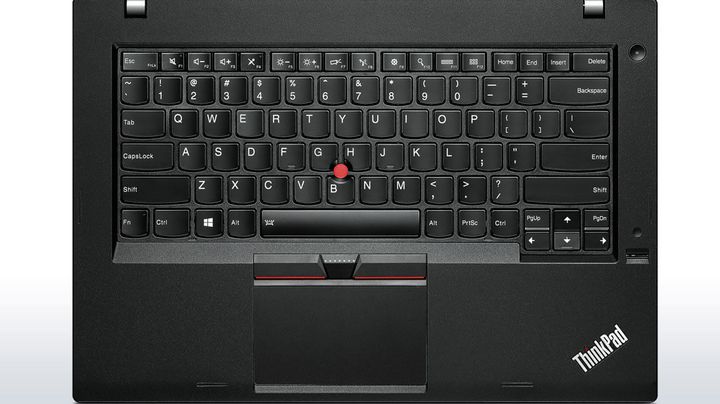 The power button unit is moved away from the main unit: it is located on the right side of the keyboard. Between the keys [G], [B] and [H] is difficult not to notice the trackpoint – a huge red joystick. This is quite a functional input device is very sensitive, so deservedly popular with many users. By the way, when working with a joystick, you can use special buttons located at the top of the touchpad.

As for the arm, he has a rough surface and clear boundaries. It supports various multi-touch gestures, such as dragging, zooming, etc. A separate dedicated physical keys touch pad does not. Incidentally, Lenovo ThinkPad L450 is equipped with a fingerprint scanner.

For a couple with ULV-processor “works” card, in this case – Intel HD Graphics 5500. It will cope with any everyday tasks that may arise when working with the laptop: web surfing, video playback, simple photo editing, etc. GPU supports DirectX 11.2, OpenCL 1.3 / 2.0 and OpenGL 4.3. Their discrete graphics is not available, but it can be found in other, more powerful versions. To choose not particularly necessary, the manufacturer offered only one option – AMD Radeon R5 M240 with 2 GB of memory.

Despite having only the built-in controller, on a laptop, you can try to run the toys, however, they should not be too demanding. So, the game F1 with a native resolution of the display and at medium settings go with 23-25 fps, teamwork toy Dota 2 with the same parameters will show 27-30 frames per second.

The laptop is available in two trims memory, so memory can be a maximum of 16 GB. Specifically, in this configuration, this volume is much lower – 4 GB standard DDR3. Keep the information on your hard drive, which has a capacity of 500 GB and a rotational speed of 5400 revolutions per second. But for fast loading using SSD 8GB. Using a hybrid drive is now gaining momentum, as a whole, this volume is enough for a laptop, designed to perform daily tasks.

With interfaces in Lenovo ThinkPad L450 situation is as follows: The right side has two ports USB 3.0, video output Mini DisplayPort, VGA connector and RJ-45 slots for SIM-cards and Kensington.

On the left side – just one USB 3.0, combo audio jack, a connector for a smart card and a socket for recharging. There you can see the ventilation grille. 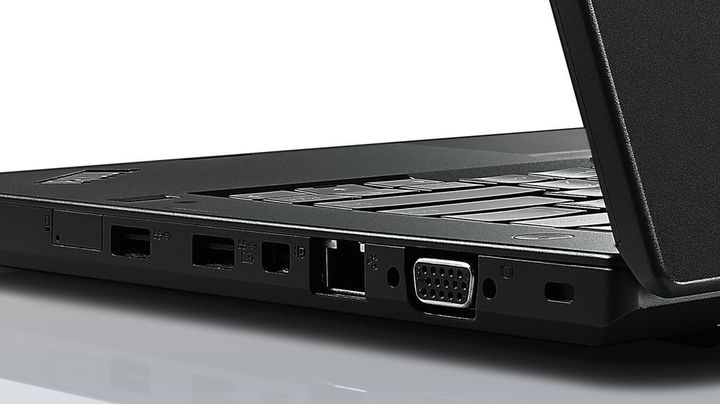 The front face is also not deprived of attention: it flaunts a card reader 4-in-1 (SD / MMC / SDHC / SDXC). Behind the interface is not. By the way, at the bottom there is a connector for a docking station. It is not included in the package, so it will have to be purchased separately for $ 250 (the official site). The dock lets you greatly expand the number of ports and connectors, in particular, with her user become available three more USB 3.0 ports and the same USB 2.0, DisplayPort, RJ-45, VGA, headphone jack. Wireless communication protocols in this notebook is absolutely typical – Wi-Fi standard 802.11 b / g / n and Bluetooth 4.0. Optionally available 3G / LTE.

The Lenovo ThinkPad L450 is set 6-cell lithium-ion battery with 48 Wh. It provides about 12 hours of continuous operation in idle mode, or 5 hours of web surfing with the included Wi-Fi and an average brightness of the display. View this video at a maximum resolution will plant the battery somewhere for 4 hours, and high load – less than 2 hours. The package included the 45-watt power supply, by means of which the process of charging, which lasts about 2 hours.

The notebook, to their credit, is silent fans, which does not give itself even at the time of congestion. With the duties, they are coping well: during the daily operation of the body of the gadget is not heated above 40 degrees. Under load, the situation is slightly changed, and the bottom becomes warm, yet not so much as to introduce an explicit discomfort.

Well, let’s sum up how interesting and rewarding it turned familiarity with the laptop Lenovo ThinkPad L450. Let’s start with its strengths. Thus, the device is enclosed in a sturdy housing that meets military standards of the USA. Its keyboard AccuType considered one of the most convenient and is popular around the world. Furthermore, the gadget provides the average filling level, which is enough for the everyday tasks which, in general, the apparatus and oriented. Pleases also an extensive set of interfaces that can be greatly enhanced through a docking station, however, it must be purchased separately.

No cons, as you know, too, was not. The most obvious – is the display, which is made of a matrix TN-obsolete technology, a weak resolution, and brightness contrast is poor. The cost of the laptop, which our equipment is about $ 850, we probably also we refer to shortcomings because the price tag for such a modification of the minimum is at least surprising.