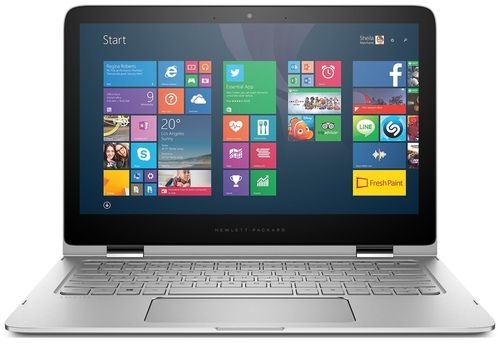 Of course, HP Spectre x360 13 – is one of the most beautiful notebook-transformer on the market, despite the many similar solutions, for example, from Lenovo and Dell. In addition to the stylish appearance and the possibility of transformation, he became the owner of a great touchscreen, just a huge touchpad, good autonomy and a very good filling. The cost of the weakest configuration, which we discuss in this report, is $ 1,500. This is an average price tag of today, at least for the fashion of modern devices. 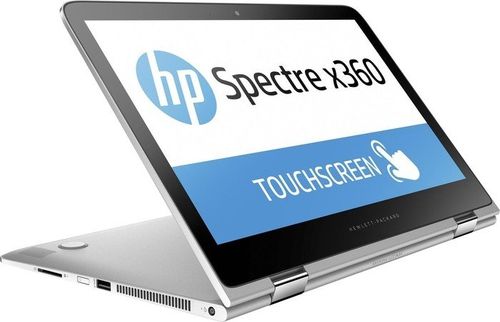 HP Spectre x360 13 entirely made of aluminum with a matte finish, it looks very stylish – completely silver chassis design underscores the businesslike tone. The quality of the assembly, as well as the materials used, merits the highest rating. In general, if not the letter of «Hewlett-Packard» on the cover and minimalist design, ultrabook could be confused with the well-known MacBook.

Keep the lid by two middle-sized glossy hinges. They are great to combine with a matt body, thereby designers subtly hinted that the loop is playing a key role in transforming the laptop into a tablet. On the one hand, the hinges firmly enough hold the top cover of the notebook, thanks to using the touch screen are very convenient, but on the other – open the lid with one hand you are unlikely to succeed.

The convertible device offers several modes of operation: a laptop, a tablet, tent, booth. Subjectively, in the role of pill use HP Spectre x360 13 is not very convenient – all the same 13 inches is not the best option to keep in one hand. And the weight of the device 1.5 kg will be very noticeable in his hands. The total size of the body of the device is 325x218x16 mm. 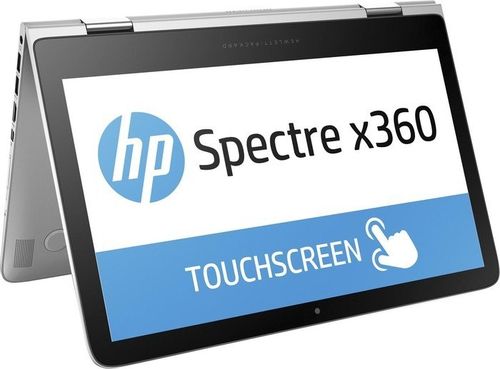 All internal components are protected underbody panel, which is attached with a few screws. Besides them, there are four support legs in the form of buttons, ventilation grille and a pair of speakers that are protected with perforated panels.

HP Spectre x360 13 installed 13.3-inch touchscreen IPS display panel with a resolution of 1920×1080 pixels. In addition to this configuration, the manufacturer offered another version with a resolution of 2560h1440, but rather, it is a cash payment to the purchasers, as Full HD entirely missing out on a small area of the screen, the proposed transformer. Moreover, the difference in image quality will not be as significant, but the load on the battery / system will increase, and the need for scale is likely to arise.

The touch screen (supports 10-finger multi-touch) is surrounded by a fairly wide black frame, which takes a lot of useful space in the display. Moreover, it is glossy, like the rest of the screen, so happy retains fingerprints, even if you wash your hands before touching the glass. While, on the other hand, the user will turn the HP Spectre х360 13 as he pleases is very common, and can frame it protects the screen from premature damage? 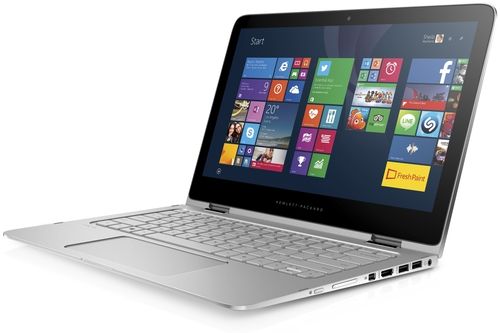 The maximum brightness is excellent – about 400 cd / m2, also not far behind figures contrast – at the level of 1054: 1. The viewing angles are predictably wide, should be thanked for that matrix IPS, and anti-glare coating, albeit imperfectly, but eliminates the reflections. The colors of the height, and certainly not just like the user to work with the HP Spectre x360 13, but also watch movies on it, and even play games.

This notebook-transformer can not boast ideal loud sound, but the sound quality pleasantly pleased. Total two speakers and they are located on the bottom part on the horizontal surface portion on the side bevels. At maximum volume did not distort, and any tone transmitted cleanly. 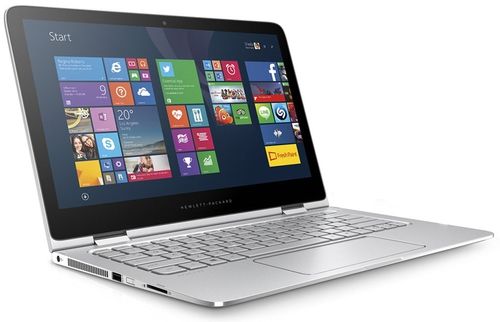 Webcam 1080, unfortunately, has not the best potential for video – the image quality is poor, as the picture shows a strong grain, color reproduction is distorted and lacks detail.

Workspace laptop is an aluminum frame with a solid substrate to the keyboard, so the process of typing or playing games do not bend anywhere – that’s a plus. But the keys are made of plastic silver color, to match the total surface of the working area. It looks a bit faded, although the taste and color, as they say … Buttons medium in size with a familiar layout and soft impact. 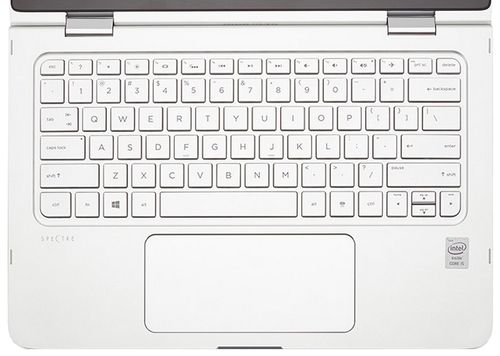 The keyboard backlight is present, but to say exactly what it will significantly increase the comfort of using a laptop is very premature. Firstly, the brightness is not adjustable, and secondly, when the backlight is turned off for some reason, still shine key [F5]. But when switched on – in the shade there is a large gap button, as its contours are not covered. In general, very mixed feelings from the keyboard transformer.

And the touchpad is just huge, it takes a good half zone, and maybe even more. With an elongated rectangular shape, offers enough space for comfortable control Windows 8. In general, it has a non-ideal sensitivity, but high-precision cursor. Hidden mouse button when you do not create a lot of noises.

Operating system Windows 8.1, pre-installed in the HP Spectre x360 13 -4051ur (M3K02EA), it is the only available option for all available equipment on the market.

This modification provides a dual-core Intel Core i5-5200U generation Broadwell. He appeared in January 2015, so it is quite “straight from the tin” mobile CPU. Made according to the norms chip 14-nm process technology, it has a TDP of only 15 watts. In addition, the processor supports multiple technologies, including Turbo Boost overclocking frequency cores from 2.2 to 2.7 GHz and Hyper-Threading for multi-threaded operations. Overall, Core i5-5200U can provide good performance, therefore, suitable for different tasks. Of course, he did not fit the gamers, but for home and office work perfectly. 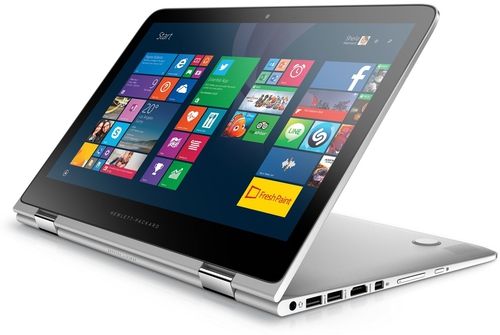 Discrete graphics is predictably not, but the built-in graphics card is represented by a very good Intel HD Graphics 5500, which uses the power of 24 units. The operating frequency is limited to 900 MHz, and this will be enough only to older and less demanding games, and then on low settings. For example, Call of Duty: Advanced Warfare 2014 issue will go to the low resolution of 1024×768 at 32 fps, and F1 2014 c resolution of 1366×768 pixels on the medium- dial settings around 37 fps. In addition to games, the video card will easily watch the video, work with various documents and even graphic editors.

The amount of internal memory DDR3L-1600 is 4 GB, which, in principle, should be sufficient for everyday tasks. Also commercially available modification with 8 GB of RAM.

Capacity SSD drive also not the biggest – 128 GB, although the stores you can find options on 256GB and even 512GB. The speed of the SSD is fairly high.

Connectors in HP Spectre x360 13 is not so much, they are diverse, but not very conveniently located. The fact is that the bulk of them, and a combined audio jack, a pair of USB 3.0, HDMI and Mini DisplayPort, located on the right side. This also rendered volume rocker, and oddly enough, the button of Windows, which “moved” from the standard space for the display here.

On the left side are a slot for the charger, compact ventilation grille, one USB 3.0, but with a charging function, and a power button and a card reader for memory cards SD.

Among the sensors in the device has a compass, an accelerometer and a gyroscope, and to provide a dual-band wireless Wi-Fi 802.11 / b / g / n and Bluetooth 4.0. In addition, the protocol is supported Miracast. It’s a shame that the manufacturer did not care about the 3G / 4G – Today the mobile Internet more and more in demand.

The Notebook is equipped with a 3-cell lithium-ion battery capacity of 56 Wh. At high load, for example, if you work with a graphical editor, or play games, the autonomy of the device is about three hours, with an average brightness level of the screen. View videos in the same conditions will take a little more than seven hours, and at maximum brightness – a little more than five hours. Indicators of autonomy are very, very good – it’s a fact.

HP Spectre x360 13 – this is definitely a “strong” convertible notebook, which has a lot of advantages and benefits that make it a very attractive acquisition. Firstly, the design of the device is unlikely to leave anyone indifferent, although a relatively considerable weight, and keep a notebook in his hands for a long time it will not turn. Second, iron and beautiful screen allows work and spend leisure time with great pleasure. Third, the possibility of transformation, which proposes to make the average of the tablet or laptop, for example, stand. And do not forget about the long-running battery that will provide a good autonomy in the absence of the socket. To date, the cost of equipment considered in this review, is almost $ 1,500 and the minimum modification of the available for sale. Sum impressive enough, but it is justified for such collections of accessories.