It’s time to update the youngest models in the gaming mice from SteelSeries.Segodnya we look to offer a new version and Kinzu v2 whether to change the novelty and how the most budget in terms of SteelSeries mouse fits our current realities.

Its owner Mouse meets several updated, though still simple packaging. Tested a model in black, as well commercially available white glossy version. It is not excluded in the future, and the emergence of other colors, as it was with the model Kinzu v2.

Appearance SteelSeries Kinzu v3 can be described as the most simple and even original. Before us is the easiest game pad, which, however, has its own brand and highlight minimalist style of the company.

The design has not changed compared to the previous generation, except for a few strokes in the black version – the color of the sidewalls are now made in the shade with a podladonnoy surface. The black version is devoid of any glossy body parts that only a positive impact on usability. The only thing for our taste, controversial element in the appearance of the mouse scroll wheel became gray, forcing the already looks simple mouse even cheaper.

And here is completely unchanged. The company continues to use the classic symmetrical shape. Kinzu v3 preserved not only the shape of the body, but the compact size.

The mouse is still well suited not only for small hands under his grip, “palm”, but can go up and large hand grip prefer a “thumbs up”. Mouse collected soundly, all the details fit almost perfectly. Side panels as podladonnaya made of a smooth, yet sufficiently uhvatistogo plastic.

Like the previous generation, Kinzu v3 is equipped with 4 keys. The main feature branded SteelSeries switches with a resource of 10 million. Keystrokes. They are characterized by a distinct touch of swing and big enough to trip. To the wheel, as well as to additional keys no claims have arisen, their course distinct, with no extra sounds. By the way, the mouse cable braid lost tissue, compared to its predecessor, but the braided cable was not exactly a plus second generation due to excessive rigidity and severity.

SteelSeries Kinzu v3 is equipped with an optical sensor Pixart ADNS-3050 with a maximum resolution of 2000 dpi, which is rather strange simplification, because the model had v2 sensor with a resolution of 3200 dpi. However, it’s probably done in order to compete with minimizrovat model Kana v2. The rest of the complaints have arisen. Fortunately, the developers, and this time refused to experiment with akselleratsiey.

Traditionally, for setting up a few mouse settings utility responsible SteelSeries Engine 3. Thanks to her, you can change the resolution of the sensor, reassign function keys and create macros and then to use any application. 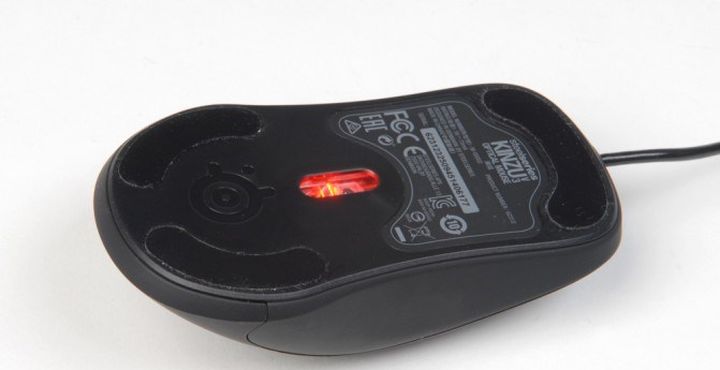 SteelSeries Kinzu v3 left a mixed impression. On the one hand we have a high quality gaming mouse, has all the necessary modern standards. On the other, on the road to success in Kinzu v3 on the Ukrainian market are competitors offering the same level of quality and more functionality for less money, or the like. Mouse clearly likely to appeal to fans of simple symmetrical manipulators, but the owners Kinzu v2 here to watch in general, no matter what.

– A smaller sensor resolution compared to the previous model