Home NEWS Android’s share of the smartphone market rose to 80%, for iOS – 13%

DavidAug 08, 2013NEWS, SMARTPHONESComments Off on Android’s share of the smartphone market rose to 80%, for iOS – 13%

Research firm IDC analyzed the market of mobile devices in the second quarter of 2013. The results are still in favor of Android and iOS, they occupy 92.5% of all shipments of smartphones during that period. However, iOS share declined.

Android’s share rose to 69.1%, just been delivered 187.4 million smartphones. A year ago, the figure was 108 million. As for the “apple” of the platform, the overall sales in the second quarter of 2013 greatly increased – it was one of the best neighborhoods for all time – but as a percentage share of mobile devices on iOS reduced. 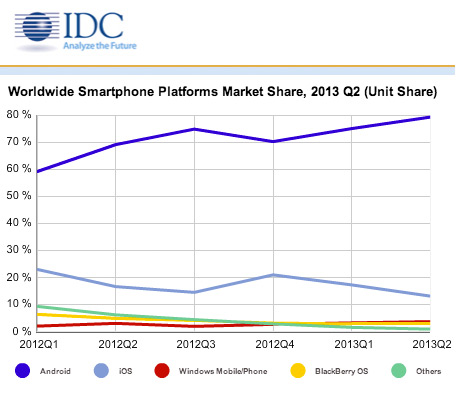 If the supply of “android” devices was 79.3%, the devices on iOS – only 13.2%. Of course, we’re talking about deliveries, rather than sell the equipment – we know that Apple is selling almost everything that is sold, and the share of traffic generated by iOS is much higher than that of Android. 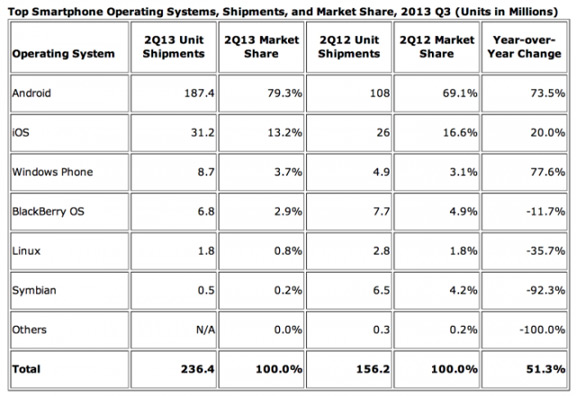 Interestingly, the Windows Phone confident ahead BlackBerry – its share rose by 77.6% and amounted to 3.7% of all shipments of smartphones, mainly due to Nokia.