The devices 2-in-1, of course, occupy a niche among all the other gadgets. It is unlikely that they can be called a necessity, however, many preferred a similar concept. Indeed, the idea to use the same device in the role and new tablet hybrid and the notebook is very tempting, it is not only functional but also saves money. Unfortunately, in practice, things are not so smooth: ideas producers often not thought through to the end. For example, the device is often a lot of weights, or it is weak in terms of performance, etc.

This year’s lineup of new tablet hybrid Hewlett-Packard Company added the new tablet hybrid – Pavilion x2 10 – Tablet PC to which you can attach a keyboard, thus expanding the horizons of use. The model has the 10-inch screen, powerful enough stuffing, and cute appearance.

Looks new tablet hybrid HP Pavilion x2 10 very elegant and discreet, without changing the overall style of the brand. Package includes tablet and keyboard dock, which can be used if necessary. Let us dwell a little more on the appearance of each of the elements. 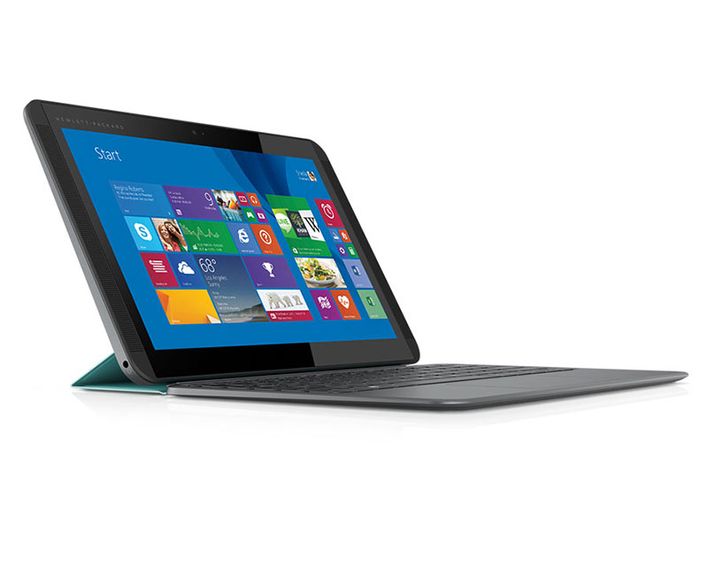 The cover of the tablet is made of matte plastic in dark gray. In the middle – a silver logo. The display is protected by a glass plate, flanked by two narrow strips frames, and on top – the lens front webcam. There you can see even a small company logo highlighted in white.

We turn to the keyboard dock, which is used in construction materials are absolutely no different from the top: the same matt dark gray plastic. By the way, the surface of non-marking, and this is a huge plus in terms of practicality and aesthetics. However, it was not without a spoon of tar: when pressed on the keyboard, it is very noticeable flexes and creaks. As for the keyboard unit, there were no surprises, because users expect a familiar layout and large enough touchpad.

The method of attachment of the two parts of the new tablet hybrid, in general, simple. The new tablet hybrid connects to the docking keyboard with two grooves and magnets. It is worth adding that the job of the magnets is not the best way: with every awkward movement it separates from the keyboard. By the way, along with the keyboard, and the user receives a further cover which is fastened to the bottom. It is light gray in color, look stylish and cute, but somehow it does not cover the lid completely, and such a move is not very clear to the manufacturer. But in the role of the stand cover on the order looks harmonious. The plate may be set at two angles 120 and 135 degrees, the choice, of course, a small, but nevertheless it is.

This new tablet hybrid has received convertible 10.1-inch screen with a resolution of 1280×800 pixels and a density of 149 pixels per inch. Of course, in modern devices, particularly those whose diagonal greater than 10 inches, you want to see the display Full HD, and it still can be found, but in much more expensive devices. Screen new tablet hybrid HP Pavilion x2 10 is covered with glass, the surface of which is protected by an additional oleophobic coating that helps to slow down the accumulation of unsightly fingerprints left by fingers. In this case, we have a matrix of IPS, which is indicative of good viewing angles. However, this is true only in the room, but outside, in the sun, waiting for the image inversion. Accordingly, anti-glare qualities tablet is not high, but again, this is typical of the lack of inexpensive tablets.

To speak ill of brightness and contrast, we will not, in principle, the special claims to him there. The image can not be called very much school, rather it is neutral-pleasing to the eye. For this display actual 10-finger multitouch, moreover, encouraged the rapid response and the response to the command. There is an automatic brightness adjustment, if desired, can also be adjusted manually.

Find the two speakers in the tablet no difficulty: they are located on the sides of the screen. In truth, the sound quality is poor, felt obvious problems with the bass and treble. The maximum volume is better not to include because the sound starts to wheeze. In principle, you can always use headphones, so the sound will be much better, or else listen to audio and video files at an average volume.

The new tablet hybrid PC is equipped with only one camera – front, with a resolution of 2 megapixels. Its main task – to provide the most comfortable video calling on Skype, with which she hopes.

If the new tablet hybrid features a user will not be enough, and there is a need to print text, come to the aid docking keyboard. It has a medium-sized key, with a dense arrangement. The keyboard is made on island type, but space around the buttons is not too much, so it’s possible erroneous pressing. Yet there is no backlight, so that the work at night, not out of the question, well, or only if the user is sufficient lighting plate. 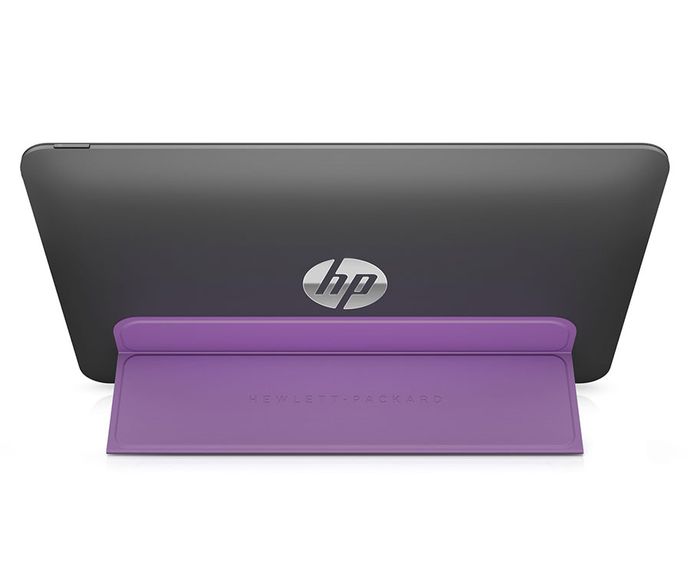 Digital unit, by itself, does not provide engineers, yet it is the privilege of devices larger form factor. There are no features in the docking keyboard we found, for example, she single-row [Enter], the buttons are large enough [Shift], compact [Tab] and [Caps Lock]. Arrows, surprisingly, not very tiny and usually in such small keyboards is their size donates manufacturer. The key travel is short, the response – good. Although acceptable performance docking keyboard for regular work she did not do, because the difference with the usual full keyboard really very noticeable.

At the bottom of the working surface is a large touchpad. It has a smooth surface on which it is pleasant to slide your finger. The pointing device detects a lot of gestures, such as zooming, dragging, and others. He was not endowed with visible physical keys. The work is very good, fast, and responding quickly to commands, user-defined.

The new tablet hybrid HP Pavilion x2 10-k067ur available with the operating system Windows 8.1 64-bit, which is the most adapted for touch control. The role went to quad processor Intel Atom Z3736F, specially designed for the Tablet PC. Upper and lower limits of the operating frequency – 1.33 and 2.16 GHz, respectively. The chip is made of 22-nm process technology and is designed for everyday tasks, as well as not very sophisticated software. 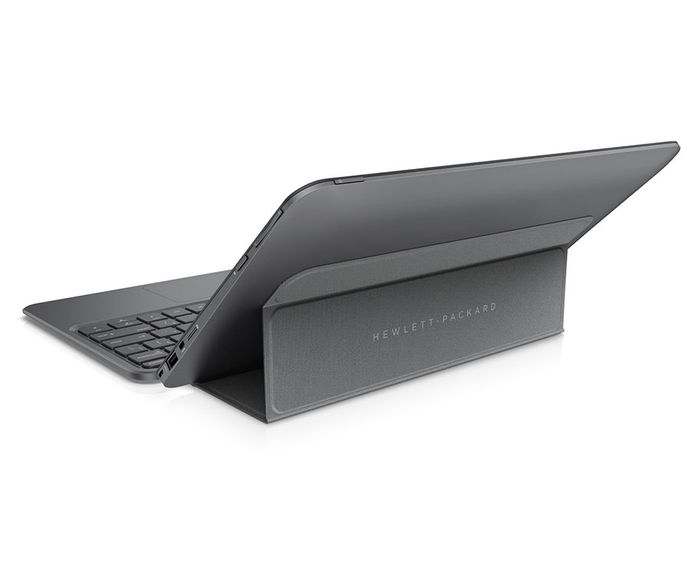 The image quality on the screen depends on the performance of the graphics card, and in this case we are talking about integrated graphics Intel HD Graphics (BayTrail). Its frequency range of 311 to 792 MHz, there is support for DirectX 11.0 and Shader 5.0. We, of course, to check how well the filling device cope with the games, and the following data. For racing simulator GRID: Autosport with a resolution of 1024×768 and low settings are shown in 32 frames per second, Trackmania Nations Forever with a screen resolution of 1024×768 at high settings, go to 20 fps. In general, one can not but admit that the HP Pavilion x2 10 copes with 3D-games at the right level, so on the part of gaming performance to him no complaints.

The amount of RAM rather modest – 2 GB of DDR3-1333 MHz standard. As for storage, then this provides a built-in 64 GB storage capacity, with a significant part of space will go under the system.

All interfaces new tablet hybrid manufacturer put on the brink of the tablet. So, on the left side you can see the single combo audio jack.

The right side has a port USB 2.0, video output Micro-HDMI, card reader and microSD slot for recharging. Also here there is a rocker for volume adjustment button and Windows. 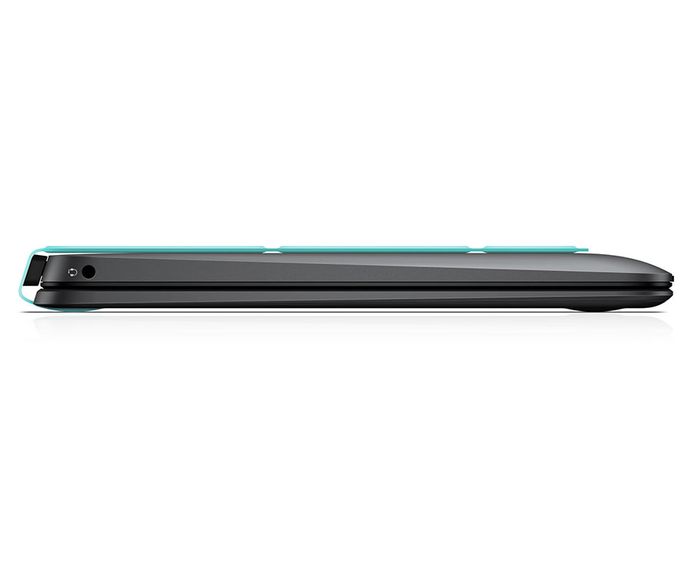 The top of – a physical button on the gadget and two microphones. At the bottom – grooves and magnets for attaching the tablet to the keyboard dock. As wireless communications modules available Wi-Fi 802.11 b / g / n and Bluetooth 4.0.

The new tablet hybrid HP Pavilion x2 10 is 2-cell lithium-ion battery capacity of 35 Wh. He has quite a good potential of autonomy, for example, in the Web-surfing gadget calm will last a whole working day. Approximately the same results are obtained in video mode, but the toys discharge device is a little faster – in about 4-5 hours. In general, very good performance, which allow to use the device for a long time, and even take it to the non-durable trip.

Getting the unit 2-in-1 new tablet hybrid HP Pavilion x2 10 left a good impression, we are ready to share with you. So, this gadget is a 10-inch tablet, which, if necessary, can be connected to the keyboard dock, get a small notebook. Undoubtedly, such a product would be of interest to all active users who want to save time and money. Among its advantages – a nice appearance, good for budget-screen as well as on powerful stuffing. Pleased as indicators of vitality and a good set of interfaces.

Shortcomings as such are no novelty. For shortcomings on the part of the manufacturer can be attributed not the so comfortable keyboard, a low-resolution screen and a cover that is not fully doing its job, partially closing a cover. By the way, the cost of new tablet hybrid HP Pavilion x2 10 as a mini laptop, very humane, and about $ 350 for the considered equipment.