Although Microsoft insists that Nokia has abandoned the family phone Asha, it is likely that in the near future will be announced next Asha 500. Making this assumption allows a new rendering, published resource @ evleaks. On the picture you can see that apparently the novelty is not too different from the Asha 501 (in some markets, this phone is already available in June), but, unlike the 501, Asha 500 with no hardware keys – instead it uses capacitive. 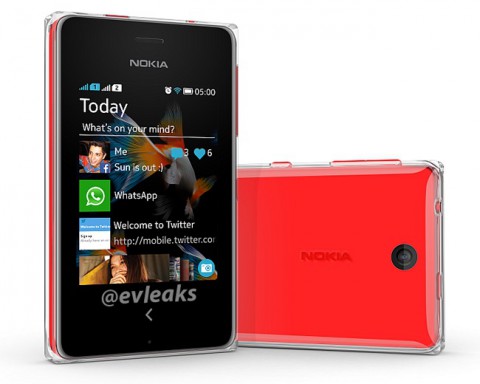 Unfortunately, we do not have any details about the features of Asha 500. We only know that this phone can install two sim cards and it has a Wi-Fi adapter. Presumably, the diagonal of the screen is about 3 inches, and its resolution – QVGA. Most likely, the other features of the phone will match the entry-level phone.

Given that the Asha 501 is now worth just over $ 100, it is unlikely Nokia Asha 500 will cost more. The two other phones from the family of Asha, which can appear as early as this year, will Asha 502 (code-named Pegasus) and Asha 503 (code-named Lanai).