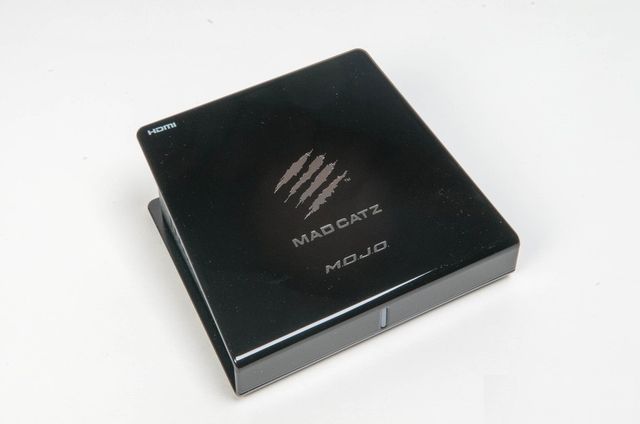 Shelf “stationary” consoles arrived on Android – and even a very cool reception the same Ouya (see our review ), it is not a hindrance, manufacturers do not stop trying to make a dedicated gaming system on the basis of universal OS. His version of the device and the company unveiled Mad Catz, known primarily for its game controllers.

Mad Catz MOJO comes in a large box of thick white cardboard. Inside are the console itself, the power supply with interchangeable tips for different types of outlets, cable HDMI, gamepad, brief instructions on getting started and a special nozzle holder smartphone gamepad.

The console is small, the size of a conventional compact media center (slightly less than the bundled gamepad). All surfaces except the matte side and rear faces of the panels are made of black glossy plastic, which instantly fingerprints. Sloped top panel gives the device a little unusual appearance, plus such a decision makes it more readable logos and console itself with the location of the player. 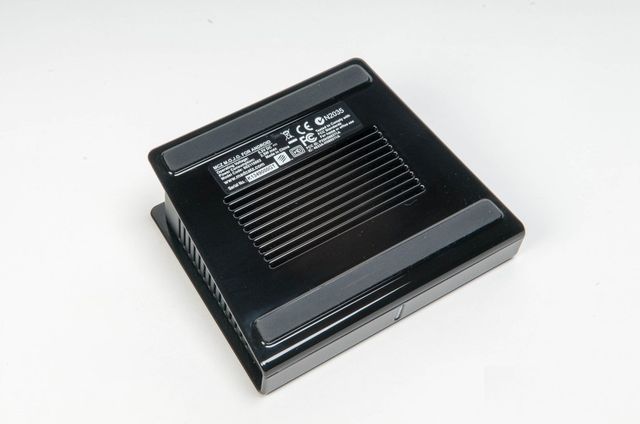 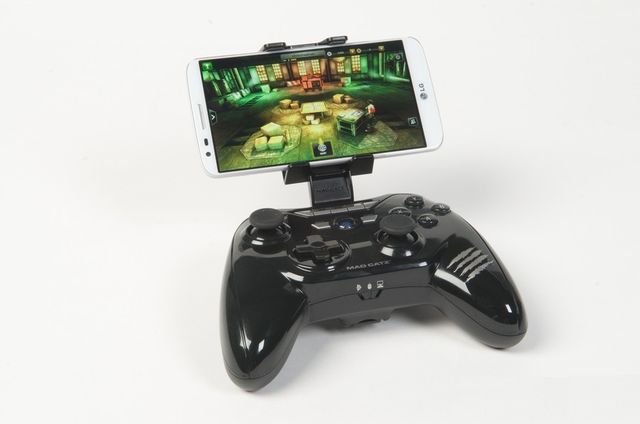 Included with the console is the same gamepad “abbreviated” name (which, like MOJO, really does not stand) – GameSmart CTRLR Mobile Gamepad. It looks almost exact copy of the Xbox 360 Controller for Windows – in fact, the main difference between them is the presence of additional multimedia buttons and glossy finish top of the gamepad. Plus, due to the use of two AAA batteries had been significantly reduced battery pack that have GameSmart CTRLR Mobile Gamepad hardly protrudes from the housing.

The controller is excellent in the hands (though glossy part of the “horns” can become slippery when the long game – fortunately, the lower part of the gamepad yet matte, and finger not have this problem). In analog triggers soft and smooth running, buttons are pressed on them easily and clearly. Cap analog sticks look a full copy of those of the controller from the Xbox 360, and they are also no questions asked. But digital D-Pad is not executed in the best way (though obviously better than the gamepad Microsoft) – it’s a distinct “cross”, and do not drive with painted buttons on it, but the course has a rather vague, especially when very often pressed where a sense of “prozhima” simply lubricated.

Besides the usual gaming buttons on the controller and have a block of multimedia – adjust volume and control playback; it will be claimed when using the console as a media center.

Powered GameSmart CTRLR Mobile Gamepad for Bluetooth, and since Mad Catz MOJO no built-in receiver, it is necessary to use an external, connected via USB – so without using USB-Hub at the console remains free only one port USB 3.0. However, this gamepad – not “exclusive” for MOJO, and it works with any smartphone on the Android (good, Bluetooth support they built). 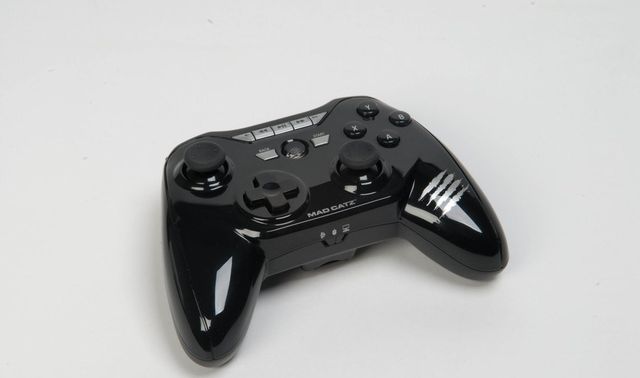 For more convenience, the game on the small screen producer even offered a very original solution – universal holder removable smartphone, bolted to the front of the gamepad – so that the user can for a minute to turn your phone into a portable console with user-friendly controls.

In this paper, MOJO 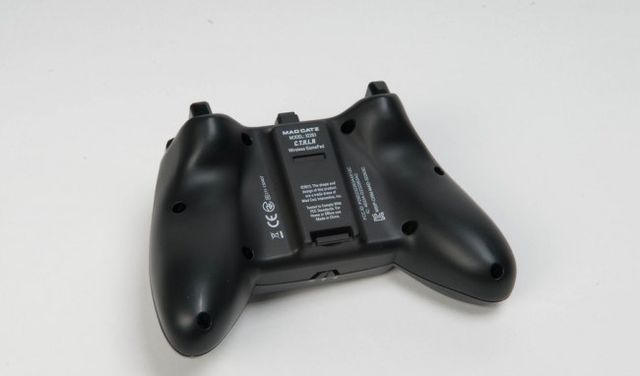 In the console version uses ordinary smartphone Android (in some places in the menu even found mention of “smartphone”) – with the standard launcher, without any add-ins. Do gamepad has 3 modes (they switched inconspicuous lever between “horns») – GameSmart (Mad Catz proprietary technology for communication “native” periphery), “mouse” and “PC”, for its use in the first or suitable (in this case it is without question determined the console even when first connected, without having to search for a new device) or the second – here begins the left stick to control the movement of the cursor, and it turns out decent enough emulation touch. In games it is better to use either “PC” or GameSmart, as in this case, the user receives the greatest functionality. 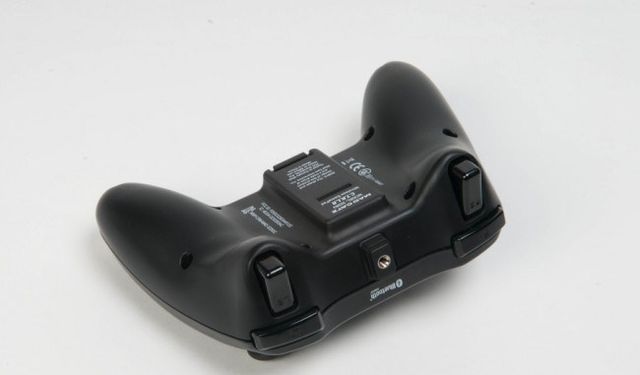 In Mad Catz MOJO have access to Google Play, however, not all the games there are marked as compatible with the console – for example, Real Racing 3, Dead Trigger 2 and Shadowgun finding does not appear (as well as all the games in the Final Fantasy series of Square Enix), three is just GTA San Andreas, and the pages of Deus Ex: The Fall and Dead Trigger go though possible, but setting is not available, but the games themselves are marked as “incompatible.” Measure the performance of Mad Catz MOJO not possible – Google Play noted as incompatible all popular benchmarks (3DMark, AnTuTu, Quadrant, Epic Citadel, Vellamo, Basemark). On the eye, 8 Asphalt, performance was adequate, but periodic jerking pictures yet observed. It should be noted that similar problems are observed with conventional applications – as, Facebook, Twitter, Instagram and MX Player just can not install – Install button instead of on their page displays a message about the incompatibility with the current device. Solve the riddle is simple – the device does not support touch control (via emulation “mouse” mode does not count), and because of this Google Play filters all applications in which the existence of touchscreen prescribed in the requirements (and not hard to guess that the proportion of those Android applications, to put it mildly, high). Mad Catz, of course, aware of the problem, but the solution offers, frankly, quite ambiguous: use Root . Moreover, a special website with steps on the initial setup console (reference to which is located on the home screen launcher) at the end recommended to Ruth and reference is made ​​to the relevant instructions. Nevertheless, it is obvious that such a step will be solved, not all buyers console to the same question arises – if the company strongly recommends Ruth, why could not start the console on sale with him?

Manufacturer presets the console application TegraZone, which in this case is the only front-end for games in Google Play, redirecting the user to the store Google – while on the console nerutovannoy TegraZone now and then you get to the games that are displayed in the shop again as incompatible. 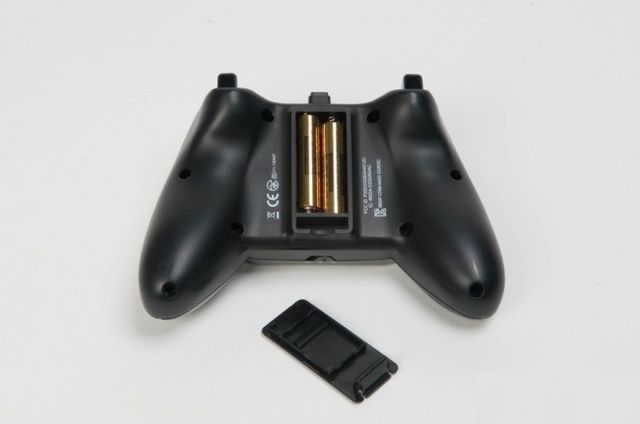 Loaded from Google Play arcade racing Asphalt 8 was not just compatible, but optimized for the management of this console gamepad – nothing needed to customize the game itself at startup shows the configuration of buttons on the loading screen. Unfortunately, the turn of the wheel, even though assigned to an analog stick, was “digital” and no different from using the reversals that, frankly, almost negates all the advantages of a gamepad in this race.

We hooked up a gamepad to your phone and tested it in Dead Trigger 2. Immediately it should be noted that “hovering” over the controller smartphone significantly shifts the center of gravity of the whole structure beyond gamepad that is not very convenient – the player gets the feeling that he was about to “break.” Of course, this does not happen (in our case, using the LG G2, gamepad without any problems standing on the table and does not turn), but in terms of ergonomics, it’s still not very good (although the only real way to solve this problem – heavier gamepad so that the weight of the smartphone in the holder has not felt – is unlikely to please the gamers). Overall management of the feelings were very similar to the normal console shooter in which you play with a gamepad, but turn the camera was slightly inertial because of what management felt somewhat “stringy.” 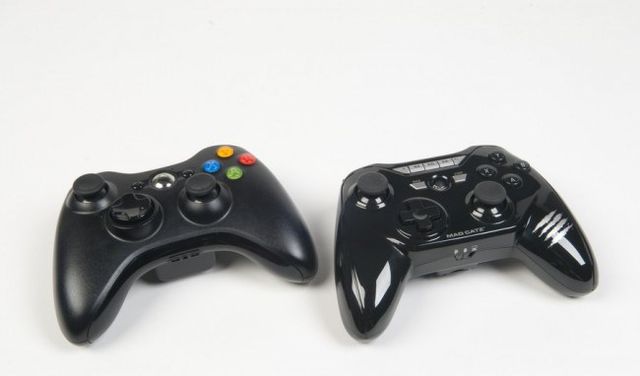 Mad Catz MOJO was very controversial product. On the one hand – a powerful “filling” and very comfortable gamepad (probably the best of those, which are equipped with similar console), on the other hand – the need to install as root, without which severely limited capabilities of the device, plus the unnecessarily high cost – even in the west stands console twice as expensive as the same Ouya; in our country, the price of Mad Catz MOJO is comparable to the price of the “adult” of the previous generation game consoles, Xbox 360 and PlayStation 3.

One thought on “MOJO – Android game console from Mad Catz”