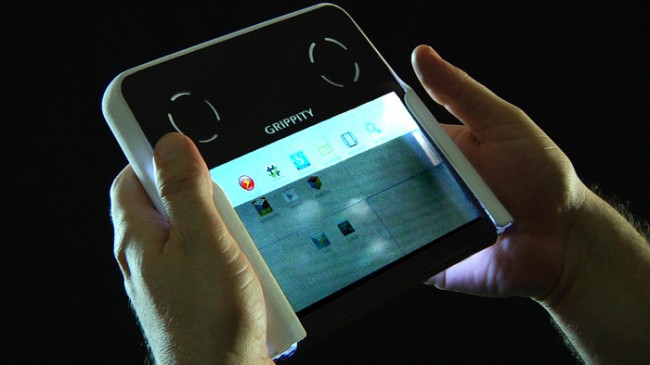 Tablet manufacturers are trying to attract users to its products differently. Someone a long battery life or screen with high resolution, someone – 8-core processors and a slim body. Tablet Grippity, who is currently on the site debuted Kickstarter , according to the developer, is the world’s first transparent tablet.

Diagonal translucent screen is 7 inches, and resolution – 800×480 pixels. Another special feature is a two-way system of sensory input. In other words, top and front side of the tablet features a touch panel.

In describing the characteristics of the tablet Set processor Cortex-A8, 4GB of internal flash memory card slot for SD, wireless modules Wi-Fi and Bluetooth, as well as an infrared transmitter to control home appliances. Role assigned to the OS Android 4.2, which will later be upgraded to version 4.4.

According to the developer, top and front panels for touch input provide users with a completely different experience with different applications and services.

In order to start mass production of the tablet Grippity, developers need $ 200 thousand if they will be able to collect the planned amount, the supply of tablets Grippity begin in autumn 2014.

TAGAndroid Grippity Kickstarter Kraudfanding Plates
Previous PostDigiTimes: Haswell Refresh processors will be presented in June, and 8-core Haswell-E - in the third quarter of 2014 Next PostSmartphone Oppo N1 with CyanogenMod on sale