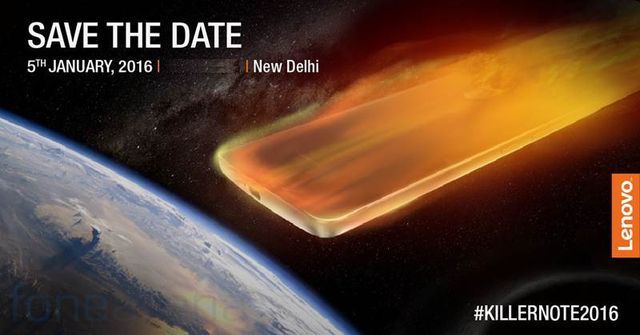 For a long time we have not heard news from the company Lenovo. We expect that the Chinese manufacturer will participate in the CES 2016 next month, and will present a new smartphone. Recently, Lenovo released a few teasers smartphone K4 Note, which is successor to K3 Note, unveiled in March.

K Note line consists of mid-range mobile devices. Nevertheless, each new generation of smartphone gets the best equipment. Recently, the company confirmed that K4 Note will be presented in January. Just today, Lenovo released teaser, which confirms the release of smartphone January 5 in India.

After detailed study of the teasers, we know that Lenovo K4 Note will have metal frame. Another interesting feature of the smartphone is a fingerprint scanner on the back panel, speakers Dolby Atmos and NFC-chip.

An interesting point – the Chinese company allowed users to choose how much RAM should have a smartphone. After a public vote revealed that 99% people want more RAM than K3 Note has. It is quite a logical decision. Thus, Lenovo K4 Note will be equipped with 3GB of RAM. Lenovo has officially confirmed this information. The rest of the specifications of the smartphone remain unknown. We can assume that the screen size will remain the same. Recall that Lenovo K3 Note equipped with a 5.5-inch screen with a resolution of Full HD.

Smartphone Lenovo K3 Note is one of the most successful Lenovo smartphone. The Chinese manufacturer has sold over 1 million units just in India for the last month. Lenovo hopes the K4 Note will be even more popular than K3 Note. Note K3 is a fairly affordable smartphone, and to keep the attention of buyers, the Chinese company does not have to raise the price tag on K4 Note.

As we have said, K4 Note will be presented in two weeks, January 5, so stay with us for more information.