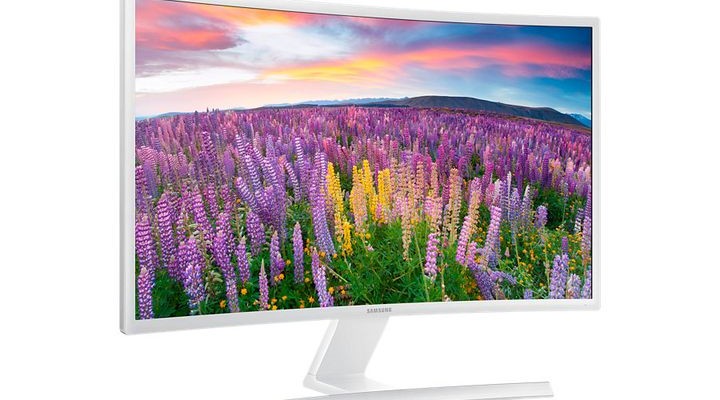 Monitors with the curved surface of the screen gradually cease to be exotic and start to win a “place in the sun” – now it is not isolated instances, and the entire product line, which is already a buyer. This year, Samsung introduced a revamped lineup with a curved screen, and today we look at one of these models – the 27-inch Samsung S27E591C.

The monitor looks stylish, this design has become “business card” new monitors Samsung – concave screen highlights the fine leg with the same radius of curvature. The screen is framed by a thin (less than 1 cm wide and about 1 mm thick) frame of white glossy plastic side face – from silver-gray glossy plastic finish “under the metal” back panel – from a practical white matte plastic with fine geometric patterns.

It has a VESA-compliant mount (100×100 mm), all connections are concentrated in the center and horizontally oriented. So, here we see a video input HDMI, DisplayPort and VGA, and audio line-in and headphone out.

It is necessary to monitor a thin V-shaped base – despite its apparent “air”, it is quite stable. Traditionally, this style legs of adjustments here there is only a change of the angle of inclination of the screen.

To control the Samsung S27E591C used four-way joystick on the rear panel, working as confirmation button. More than any buttons (even switching on), this model is not that at first somewhat discouraging.

Moving the joystick left / right is the volume control, up / down – miniature menu adjust the brightness and contrast. Pressing the joystick is called “Quick Menu”, which is available to challenge the full menu, switching between video sources, activation mode “rest for the eyes” and the monitor off (turn on it, it is quite logical, pressing the joystick).

A two-level menu, navigating on the substantive items on the right shows their constituent sub, when any of the points of the left side “shrinks” to the icons, right “disclosed” and the side of it there is still a window with a description of the selected paragraphs.

First there is the section “Image”, which can adjust the brightness, contrast, clarity, choice of image format, switching the black level (for HDMI-compatible), adjust the acceleration of the matrix, including a game mode and configuration features two brand – Samsung Magic Upscale (increase field) and the Samsung Magic Bright (choice of one of four preset video modes – User, Standard, Movie and Dynamic Contrast). Here you can adjust each of the three primary colors separately, the choice of color temperature (select “Hue” options – the “normal”, “warm”, “cold”, “user”). Also, there is a variety of scales – without specific values, only the options “Mode 1”, “Mode 2” and “Mode 3”.

In “Mapping. on the screen “, the user can configure the OSD: select the language, location, display time, and transparency. In the “System” There is the possibility the reset all settings to factory default values, setting the sleep timer, selecting the PC / AV, auto detect the video source and display power shutdown mode (in which case it will be released only in standby mode). And the last point, the “Information” window will be displayed with information about the current connection and the model name of the monitor. 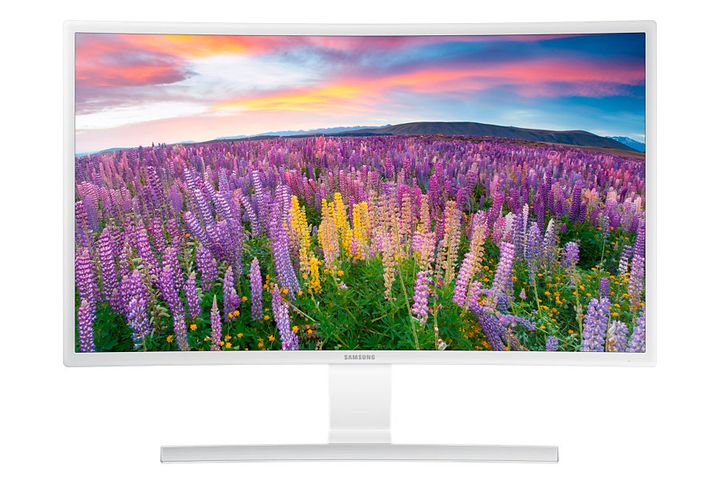 Samsung S27E591C uses a proprietary VA-panel with curved surfaces, 27-inch, aspect ratio – 16: 9 and a resolution of 1920×1080 pixels (pixel density, so is 82 PPI). On a diagonal FullHD, as practice shows, it is perceived by users in different ways – some believed that the pixel size is too big, someone on the contrary, like the major elements of the interface and has low power of the PC in today’s games.

Bending screen really small – according to the specification of the monitor, the radius of curvature of 4 meters. Of course, he catches the eye when you look at the monitor from the side, but while working on them, “the curvature of the” do not pay attention at all. If we look at the center of the screen, the peripheral vision, it is not felt at all, if the transfer to the edge of view, unlike the flat panel display becomes noticeable (mainly because of the angle at which the user looks at the image border, is closer to a straight, and the picture is not distorted as it used to).

The claimed response time of the monitor – 4 ms (GtG). This is an excellent result for VA-panel, so we can assume that this value is achieved when the overdrive (the menu – “Picture” – “Response Time” – “standard” / “fast” / “fastest”). Tests show that the dispersal of artifacts missing only the first value of this parameter, while the second and third visual is almost no difference. 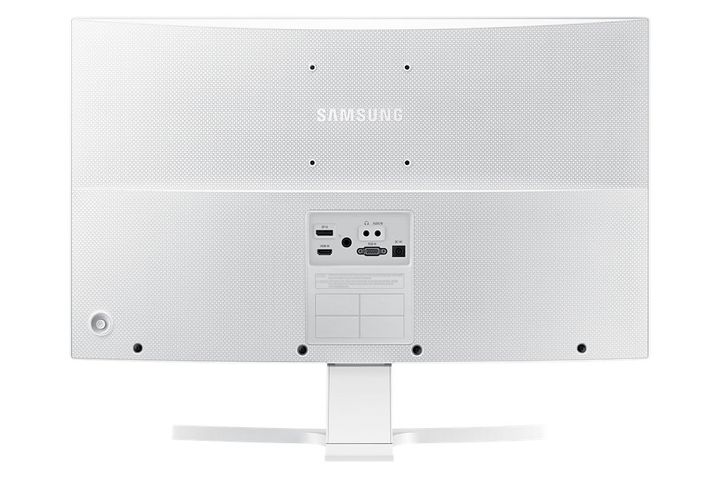 The Samsung S27E591C used semi-matt coated screen – it looks like an ordinary mat at right angles, but gradually becomes glossy with increasing viewing angle. This coating allows almost completely get rid of the parasitic glare and reflections, while the image does not suffer from the effect of the crystal caused by conventional anti-glare matte display (looks like a light grainy on plain areas of the image), which can be seen in close-up shot.

To adjust the brightness, apparently, in this model is not used PWM (or flicker frequency so high that define it “by eye” is not possible). The minimum brightness level was quite low and was 39 cd / m² – this will comfortably work for this monitor, even at night, with the lights off. Maximum brightness (average of measurements of 35 points on the screen) was 353 cd / m² – this is a great indicator of how to monitor these levels of brightness for him can work, even in bright ambient light. The most striking was the center portion of the screen less bright – the upper left and lower right corners; the difference between them was about 60 cd / m², which is a normal result for this type of lighting, the diagonal of the screen and the orientation of the model for the home user. 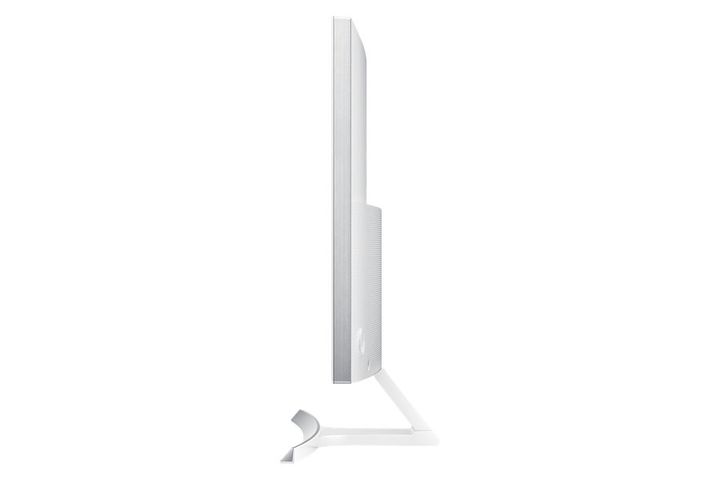 Viewing angles from Samsung S27E591C are typical for VA-panel – with deviation towards the brightness and contrast markedly reduced, and the image takes on a distinct warm shade. Another discoloration is not observed, and overall this parameter monitor looks good enough.

Leak lighting, this model is virtually absent – when displayed on the monitor of black color, it looks uniform and to detect faint light background at the bottom, we had to increase the shutter speed of the camera three times compared with those settings, which made similar pictures from other monitors. It should be noted that such a uniform and deep black color can be achieved through the use of this model, the panel made by technology VA.

Glow effect is also very weak – at a steep angle appears subtle dark gray glow on a black background; in normal operation, it will not be able to notice. 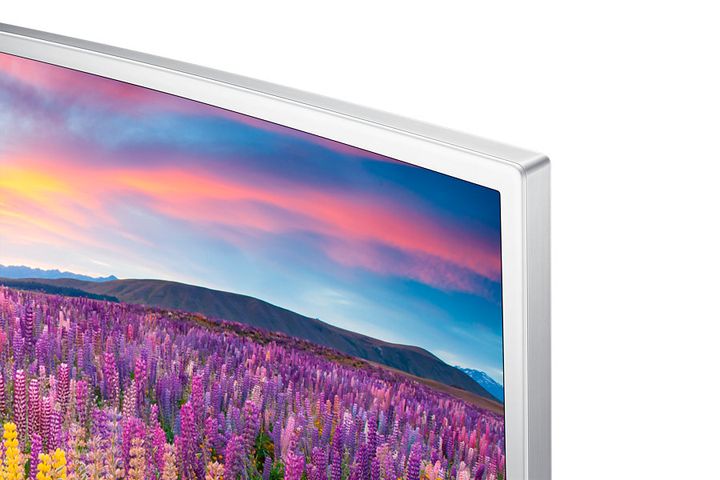 Preset Modes switch in paragraph Samsung Magic Bright – are available to the user options “Standard”, “Movie” and “Contrast” and “Custom”. In “Movie” turned off all adjustments except brightness, the higher the clarity of the image, and gamma curve forms a kind of “sine wave” with a maximum of 2.6 in the dark areas of an image and a minimum of 1.3 – in light (it gives the image the deep dark shadows and improves the saturation simultaneously working through the details in the highlight areas). In the “standard” image is the most similar to the “standard” and, if manual adjustment (or calibration) of the monitor is not planned, in most cases, this is the mode will be most appropriate. Note that in it the user, however, all the available adjustment, so adjust image “by itself” in which case he would no problem. The color gamut in “standard” mode, up 95% sRGB (70.2% Adobe RGB), color accuracy was very high – the average deviation was at the level of 0.3, the maximum – about 2.5; the results of more than arrange any, even the demanding user. 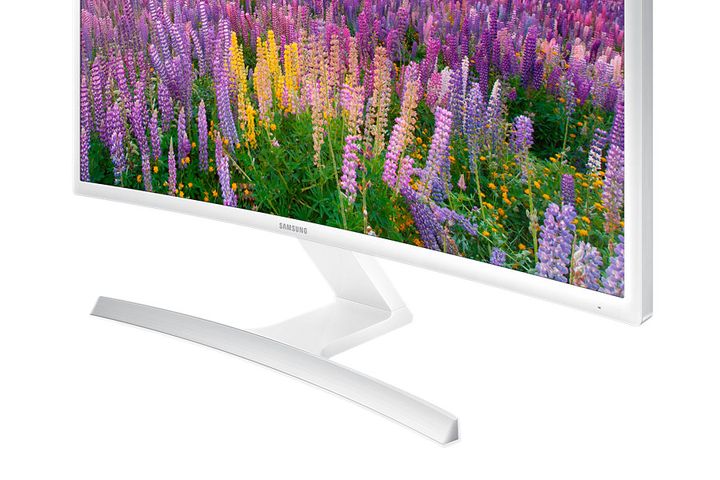 Samsung S27E591C – a new model of the monitor with a curved screen is enough affordable and offers a nice design, good build quality, and excellent image quality, even without manual adjustment. By using the VA-panel display, shows a high contrast, deep blacks, and rich, natural color. Curved screen closer to the user of the image and thus improves comfort for the monitor, and no inconvenience this unusual (yet) does not create a form.

– Special shortcomings have been identified