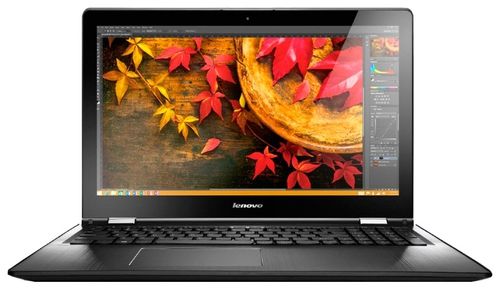 It would seem, transformers today nobody will be surprised, and if the majority of users have not yet acquired such a device itself, then at least heard of it. Perhaps, new beautiful laptop Lenovo may be considered by the legislator “fashion” to such hybrid gadgets, and they account for far more than one segment of it.

Hero review – new beautiful laptop Yoga 500 14 refers to a line of the same name, but at the same time, some details reminiscent of a productive notebooks ThinkPad. New beautiful laptop, as expected, can operate in one of four modes, endowed with a 14-inch screen, and powerful enough stuffing the last generation. Next – even more interesting!

It would seem that looks flashy new look: a black cap, a simple and stylish body. Fortunately, Lenovo engineers to provide our fans love the freedom of choice, but because, in addition to a low-key black and offer more bright colors, namely red and white. Thus, one can pick out the best option, appropriate in all circumstances. Consider the body parts in more detail. So the cover is made of matte plastic, it is smooth to the touch. Immediately, we note the minus surface actively collect fingerprints, so the user needs to equip a special cloth. In the upper left corner of the cover, you can see a small company logo, but more there is nothing. 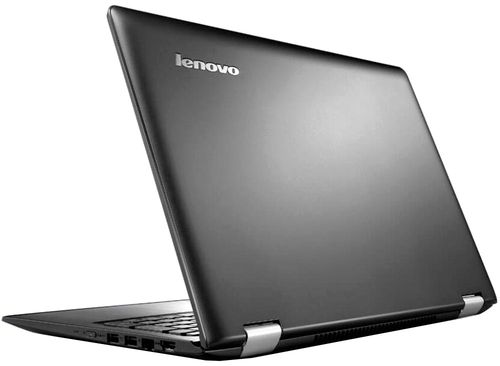 Inside, see the glossy screen, protected glass on the top of which was placed a webcam. With regard to the working surface, there is already involved aluminum, which has a positive effect on appearance, and ergonomic features. The keyboard looks very comfortable, although it did not have a digital box.

On the modes of transformation of such devices it has been already written a lot, so paint the details on this process, we probably will not. We note only that new beautiful laptop Lenovo Yoga 500 14 lets you use one of the four modes to choose: a laptop, tablet, console and presentation. With the first two, and so everything is clear, the rest you can achieve even greater functionality by using the gadget, for example, for presentations or to play games. This is made possible by a special design: the cover is able to scroll a complete revolution, that is, 360 degrees. 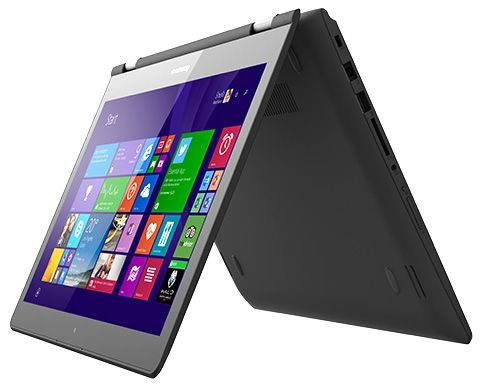 The model is designed and implemented soundly, no claims to it. The hinge mechanism is a two-loop tight enough. Open the lid with one hand is unlikely to succeed, moreover, in the front part of the housing of the laptop is not provided a recess that would facilitate this process. During operation, no squeaks, no backlash and no flex. With regard to dimensions, they are somewhat large for contemporary 14-inch device length is 340 mm Width – 235 mm, and the thickness – 22 mm. Weight while not the most modest – 1.8 kg, for transformer – is clearly too much. By the way, plastic matt bottom you can see the ventilation grille and four rubber feet on the perimeter.

The 14-inch new beautiful laptop screen has a resolution of Full HD – perhaps today it is the most optimal for such diagonal. Due to the matrix used IPS can talk about wide viewing angles, respectively, by changing the angle inversion occurs. The surface of the display – glossy, therefore, can not avoid glare. 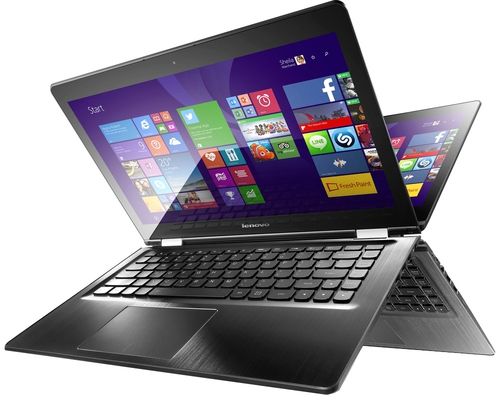 With other characteristics not all rosy: the brightness and contrast – frankly the weaknesses of the screen. The maximum brightness level does not exceed 150 cd / m2, contrast – 875: 1. Thus, it is not necessary to hope that the device will be to work on the street, especially if the weather is sunny. By the way, the touch display, which is equipped with our chosen accessories, behaves well: he has a good and quick response, so the commands are executed without the slightest delay. 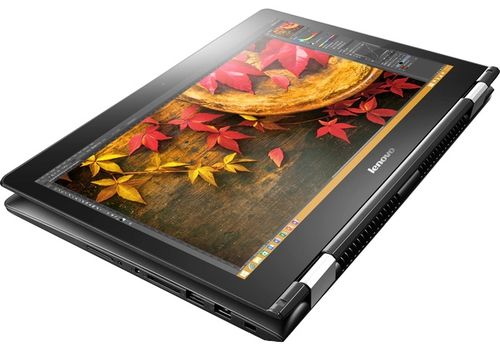 At transformer has two bars, located on the bottom, close to the side faces, which are hidden under the speakers. Despite their small size, they exhibit excellent sound quality. Of course, to multimedia speakers laptops does not hold, but for the 14-inch hybrid – more than enough. The stock volume is large enough, the sound is not at maximum wheezes to a room or office – the most it!

Of course, it provided in the new beautiful laptop Lenovo Yoga 500 14 and webcam, which settled on the top frame of the screen. Its resolution is 1 megapixel for video calling on Skype without detail image will be acceptable.

About as keyboards in notebooks Lenovo knows probably already everything, and transformer new beautiful laptop Yoga 500 14 is no exception. His surface is a whole plate of aluminum, comfortable hand by the constantly cool surface; keyboard unit itself slightly recessed into the body. It is made on island type, so around each key has enough free space. Marking buttons – white, some additional function keys also painted red. By the way, pressing the short, but at the same time clear, so printing can be tirelessly for a long time. 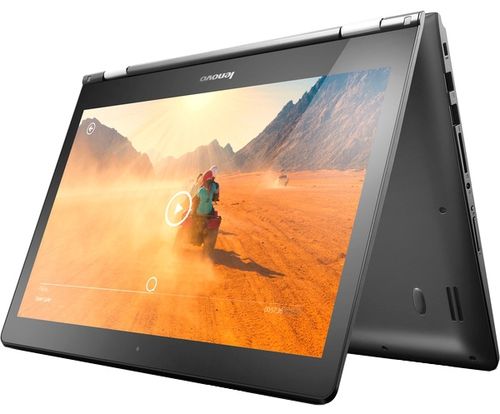 Numpad missing, which is typical for the 14-inch form factor. With regard to any features keyboard buttons, the situation is as follows: “hot” keys are large enough for them to easily enter, [Enter] single-row, left [Shift] greater than the right, [Caps Lock], [Tab] about the same size . There is a two-level lighting, which allows to work in conditions of pitch darkness.

Under the space located touchpad. It is quite large in size, has a smooth surface on which to slide the finger comfortably. There is support for multi-touch gestures, among them – zoom, drag, etc. No physical keys, just built, and the vertical divider allows accurately determine their location.

New beautiful laptop Lenovo Yoga 14 500 (80N54005BUA) comes with the operating system Windows 8.1. The filling device includes a dual-core processor Intel Core i5-5200U, based on 14-nm architecture Broadwell. It supports multi-threading technology Hyper-Threading, which allows you to simultaneously handle four streams, as well as Turbo Boost, whereby the nominal frequency of 2.2 GHz can be increased up to 2.7 GHz. This processor is very energy efficient, its TDP is 15 watts. 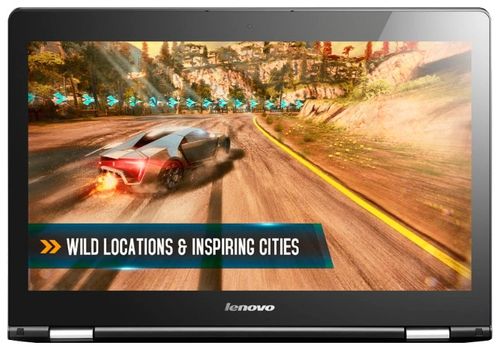 Built-in video card Intel HD Graphics 5500 supports DirectX 11.2 and OpenCL 2.0 and is easy to cope with daily tasks undemanding. However, it does not matter if some of them integrated graphics will not pull – for such cases is provided discrete. In particular, it is an NVIDIA GeForce 920M with 2 GB of internal memory standard, DDR3. This accelerator features a range of operating frequencies from 575 to 954 MHz, supports Optimus to automatically switch between integrated and discrete graphics cards. We also tested how it playable by way of example new toys and is a little outdated. So, Batman: Arkham Knight with a resolution of 1366×768 and medium settings will just 10-13 frames per second. Racing Dirt Rally with the same parameters will go to 31-33 fps, Sims simulator and 4 – with 70-75 fps. As you can see, the device’s performance is quite weak: an enjoyable game, without lags and braking, is possible but is not this Regarding toys and even last years.

Transformer new beautiful laptop Lenovo Yoga 500 14 is still not a multimedia device, and demand from him an extensive set of interfaces would be probably wrong. In principle, that is, should be sufficient for daily work, as well as in the office. Judge for yourself: on the right side were placed two ports USB 3.0, one of which support Power Charge, video output HDMI, network RJ-45 connector. There is also a power button gadget battery level indicator.

The left side has a port USB 2.0, card reader 3-in-1 (SD / SDHC / SDXC), a combined audio jack, socket for recharging, a physical volume control buttons and a slot for a Kensington lock.

Neither the front nor the back nothing.

The notebook is equipped with a 3-segment battery capacity of 45 Wh. The manufacturer emphasizes that such a battery new beautiful laptop Lenovo Yoga 500 14 is able to live up to 6 hours. In principle, such a statement coincides with the reality, but only in read-only mode. The same web surfing defuses the device for about 2-3 hours, the game – an hour and a half. Frankly speaking, these results – below average, found this criterion competitive models of similar form factor will have no difficulty.

Now for the heating Transformers heated, and very significantly, under load the temperature of its internal components can reach 90 degrees. However, if the run is not very complex tasks, such as sitting on the internet or work on documents, such a problem does not arise.

That was an acquaintance with the new beautiful laptop Lenovo Yoga 500 14 transformers. To say that it was very good, probably not, yet this gadget, as indeed any other, has its own specifics. Let’s start with the fact that it is heavy. No, 1.8 kg laptop – normal weight, but we are talking about a hybrid device that can be used as a tablet! Hold it for a long time on the weight definitely not works, and it is – a serious disadvantage.

The display is also not enthusiastic. It is much glare, brightness and contrast – are weak, so comfortable work is possible only if the work in a room with normal lighting.

Of course, new beautiful laptop Yoga 500 14 plus is also available! First of all, it is the good-quality and reliable keyboard on which you can print long without getting tired. With filling in the laptop and everything is in order: the processor Intel Core i5-5200U and Graphics NVIDIA GeForce 920M – a great option for those who want to “chop” toys with no claim to novelty games. By the way, the cost of the described configuration is about $ 1,000, but to give you a model of this kind of money – you decide!