After the latest rumors a few days ago the famous @ evleaks has released new rumors about the new Android smartphone from HTC, or Zara. According to the source very active in recent weeks, the new HTC Zara would be the merger of the family One and Desire, so it will also be the technical specifications.

Here is what was stated by @ evleaks: 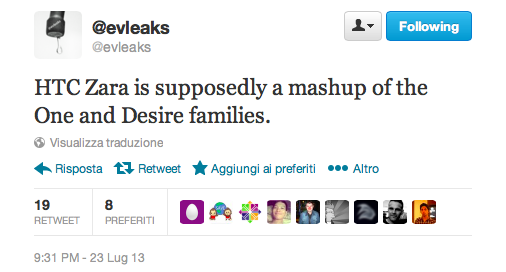 The new Czar to be equipped with:

The specifications, as stated by the source, would be a real mashup between the two families of HTC smartphones, between a Mini One and the new Desire 500.

HTC Zara should be available initially in the U.S. and later also in Europe and Asia, so we await further information.