Most recently, we introduced you to the Bluetooth-headset LG Tone+, which we really liked and caused mainly only positive emotions. Now we got to a higher class model with a label harman / kardon, but with a similar form factor. Let’s see whether or not to overpay for the LG Tone Infinim and so whether it is good, as claimed by the developers.

The device comes in a stylish box which in the upper right corner you can see the logo of the harman / kardon.

It was the latter is immediately an unusual interest in the device, because this American company is famous for high quality audio products, but this is a little lower.

The very same headset is seen inside a transparent film. In a small box hidden instruction, extra ear pads and a USB-cable for charging.

First saw the headset series from LG HBS appears surprise and questions – what is the collar, where his dressing as intermeddle in the ears, and so on. D. But now we have a special surprise and savvy design did not cause. 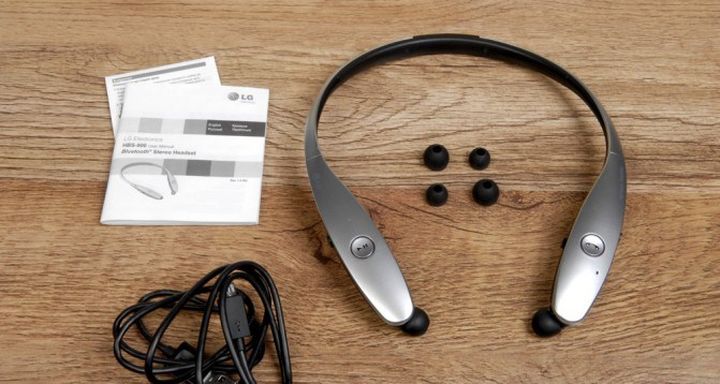 But the design, compared to the same LG Tone +, more mature and respectable. Kind of a kind premium, there is no dispute. Taking LG Tone Infinim first seen in the hands of the highest quality materials and workmanship. The whole structure is made of several types of plastic, as implemented by the elasticity of soft rubberized material in the center of the headband.

Small creak can only get when you squeeze on the “horns”.

LG HBS-900 is worn around the neck, simulating a necklace. Headphones themselves are nominated from the edges of the headset with the internal mechanism, and come back when you press the buttons on the side of the headset. The cord is very thin, which causes distrust at first, but for long term use comes the understanding that its strength is high – will be very hard to break, soon fly off to the neck design.

A couple of words about the headphones. Nothing extraordinary in appearance, they are not of themselves, it is the most common compact and lightweight headphones vnutrikalnye lacquered black finish. Bowls reminiscent of some of the best IEM-s in its price category Sennheiser IE4, not only with frosted bowls, and with glossy. In my ears at medium embouchure position was stable, no complaints of discomfort.

I never was a fan of wireless headsets, wired always preferred options on many factors, especially in sound. But the breakdown of consciousness occurred during the test more LG Tone +, when I began to realize that this headset is at times convenient to my everyday SoundMAGIC E10. But now I can confidently say about the convenience of this form factor – anywhere, with any clothes during any classes headset wonderful sitting on the neck, and the headphones do not expect to fall out.

For athletes and people with active lifestyles LG Tone Infinim fit perfectly. Model was tested in the gym and during the run – absolute convenience when performing any exercises on a treadmill and jog along the forest path. Although when we first met the front grounds do not seem quite appropriate for this kind of training, but as experience has shown, these were only assumptions.

It turned out that I put on the device itself before even managed to address the situation of the controls, which was a good test for intuitive operation blindly. Within a few seconds, all buttons and sliders were studied and it was clear that for the last meet. 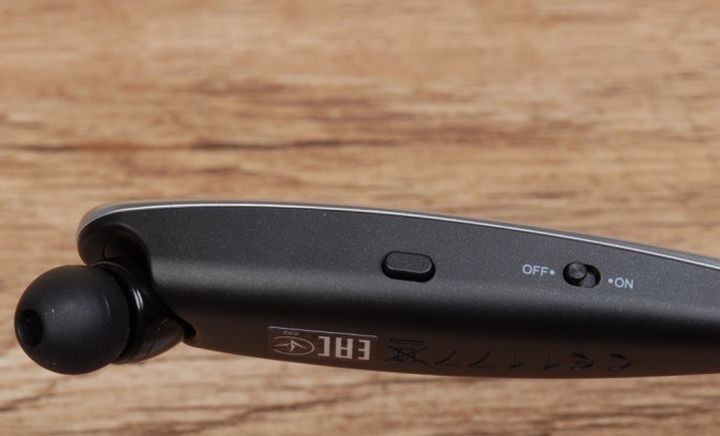 On top of the foundations rendered button play / pause and answer the call. Placed at the ends of special sliders Jog Switch, with which you can control your music and change the volume. The inner part of the right base gathered on itself slider on / off button and the coiling of the right earpiece, the left you can find the microUSB slot under a flap indicator and button to rewind the left earphone.

Connection is by means of technology Bluetooth 3.0, just as with any other Bluetooth-enabled headset. A little disappointed no NFC, especially considering the positioning of the model, but it can not be called a great disadvantage.

So, we got to the point. The manufacturer declares that the LG Tone Infinim is the first headset from LG, which has been developed in partnership with harman / kardon. Another marketing ploy or is not it? Bed, hand on heart can say with confidence – the sound is excellent. At a cost of about $ 130 is a very decent solution, even if we take into account only the sound quality, with no mention of additional functionality. Model plays at the level of the best wired In-ear monitor in this price range, that in itself is surprising.

Sound LG Tone Infinim extremely smooth, aggressive, resilient and detailed. Play music for the first time there is a feeling very similar to when I first heard of products from Beyerdynamic, in particular DT 770 – the music does not play the way we used to, heard all the tools, there is no dominance of low frequencies, such as dry or something. Expelling all our test composition love this headset even more increased. Very cool, but it’s cool, it sounds heavy music, reveals the entire tower drive, dynamics, speed. Bass resilient and quite blurry, it just as much as you want. 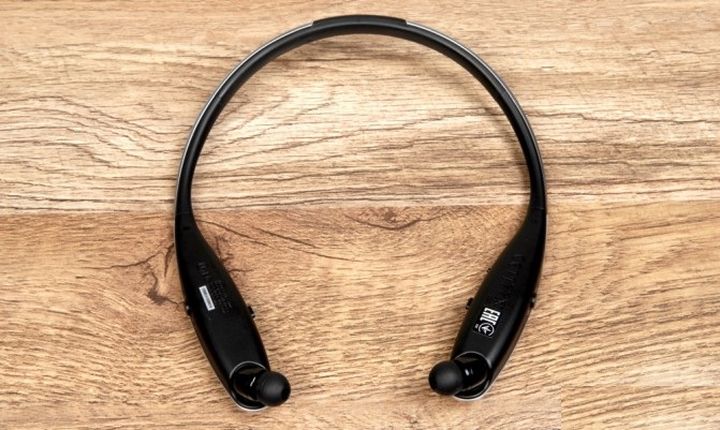 Bluetooth-headset came to our office with the release of new albums by Papa Roach, Marilyn Manson, Fall Out Boy and Enter Shikari. This is also confirmed musicality LG Tone Infinim – device coped with brutal electronics Enter Shikari, dark industrial music Marilyn Manson, rock with a touch of the same electronics from Papa Roach and tear pop punk Fall Out Boy. By the way, albums came out wonderful, but Papa Roach little lost ground.

LG HBS-900, we compared in sound with remarkable headphones Shure SE215 . BTE clothing from Shure, I almost certainly 100% thought that the headset from LG is clearly not a competitor data IEM. But as it turned out, the sound level on identical, though color is completely different – Shure play atmospheric and slightly darker, but not everyone will like thick flooding the bass, but Tone Infinim plays truthfully, clean and tidy, that for me is preferred. And take into account the cost factor, wired headphones from Shure have practically the same price tag with a headset LG. As it turned out, and it happens.

It also supports aptX, that allows you to transfer music with high quality. Personally, I could not distinguish the sound of your smartphone with support aptX and without. Maximum volume for many will be enough, but could use a little more headroom.

Additional opportunities for application is responsible Tone & Talk for Android, which is a set of configuration instructions – there is also the possibility of raising the last SMS, actions in social networks, for example, who laynknul last photo in Instagram, and so on. D. Another useful feature is the the opportunity to learn while delaying a second slider switch tracks. Exactly the same, only with the help of other sliders, you can see the battery level, turn on / off vibration (yes, headset vibrates for incoming calls and SMS) and read the latest post. When you double-click the key answer the call should dial the last number dialed.

For owners of LG G3 are several additional functions – notification name of the caller without taking smartphone display the status and balance of the battery directly on the screen and the function Answer Me +, which turns off the headset when held close to the ear phone to answer the call.

The microphone itself has worked well, even in noisy environments and during strong winds. Voice excellent conversationalist never complained. Audibility companion at a high level, and the stock volume is enough for almost everyone. 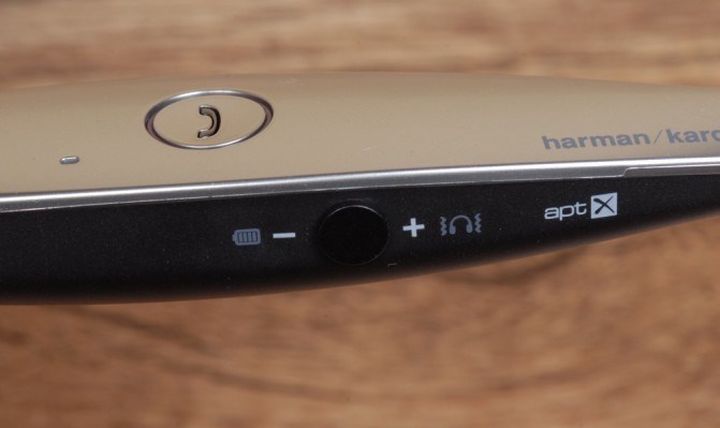 As with the LG Tone + we were pleasantly surprised by the duration of the headset. The manufacturer promises up to 14 hours of music playback and up to 17 hours of talk time. When testing the LG Tone Infinim we received 15.5 hours of music on a volume of 12 divisions of 15. Charging using the bundled USB-cable occurs in less than 2 hours.

LG Tone Infinim very rare product that combines great sound, successful ergonomics, stylish appearance and good functionality. If you are looking for Bluetooth stereo headsets in this price range, be sure to pay attention to this model.