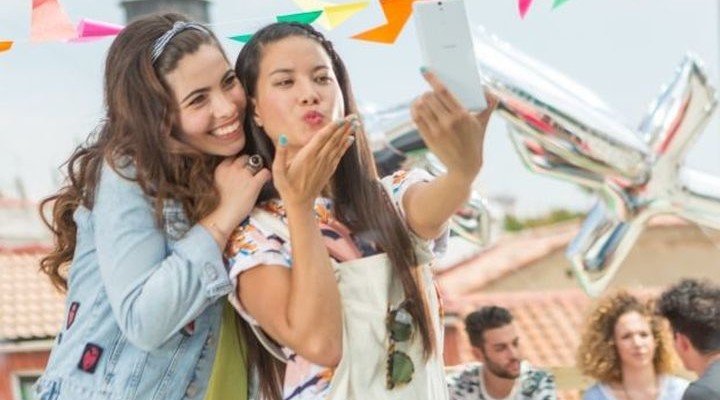 The exhibition of modern electronics IFA 2015, Sony has pleased his fans by presenting a number of interesting devices. About Trinity, it’s flagship Xperia Z5, Z5 Compact, and Z5 Premium we have already mentioned. Today we are ready to enjoy the new smartphone Sony Xperia C5 Ultra – mainly Japanese brand.

Celebrities delight fans with hundreds of albums with their crossbows. On YouTube, there are many lessons to the instructions for creating the perfect that are not worse than those of celebrities. Companies are actively producing different themed gadgets. Of course, manufacturers of smartphones could not miss the self-trend.

Design new smartphone Sony Xperia C5 Ultra thought, and every detail of the gadget is, so to speak, in his place. The smartphone is a classic six-inch screen with PHABLET, designed in the style of absolute minimalism. By the way, some experts argue that the new device is the most beautiful of the Japanese manufacturer. Yes, the taste and color of comrades not, but it really catches the eye. 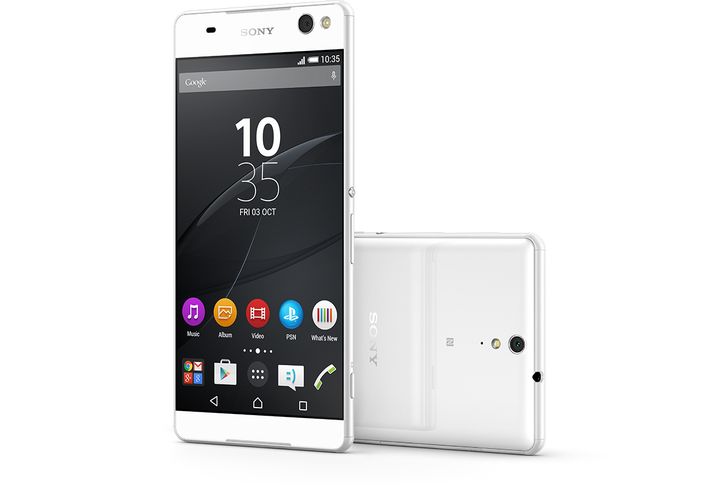 The first thing you notice immediately when you look at the smartphone is the lack of a framework around the display. In fact, they are certainly there, but very thin – almost imperceptible.

The developers managed to do the impossible, increasing the size of the display up to six inches without significantly increasing the overall dimensions of the body. The width and the height are 79.6 mm and 164.2 mm, and thickness – 8.2 mm.

Unlike the flagship new smartphone Sony Xperia Z5, the device in question in the case of glass is not so much. It covers only the front panel. The rear panel simulates a mirror coating, but it looks like this is just the glossy plastic. The ends are made of shiny plastic, but there are corners of the metal insert so that the protection of the smartphone in the fall provided. Angles, by the way, are beveled on only a very little, that is smooth and streamlined, like Apple iPhone or Samsung Galaxy, no. This is a design feature Sony Xperia C5 Ultra. The gadget looks exquisite.

Ergonomics in new smartphone Sony usually suffers the most. Location of the controls in the Xperia C5 is well thought out, but still with one hand to operate the smartphone hard.

On the right side are: buttons Power, volume control, and camera shutter button. The idea is to enable or block the display should be the right thumb, but the owners of small hands and short fingers have a hard time. However, if you are left-handed, then everything is much easier. 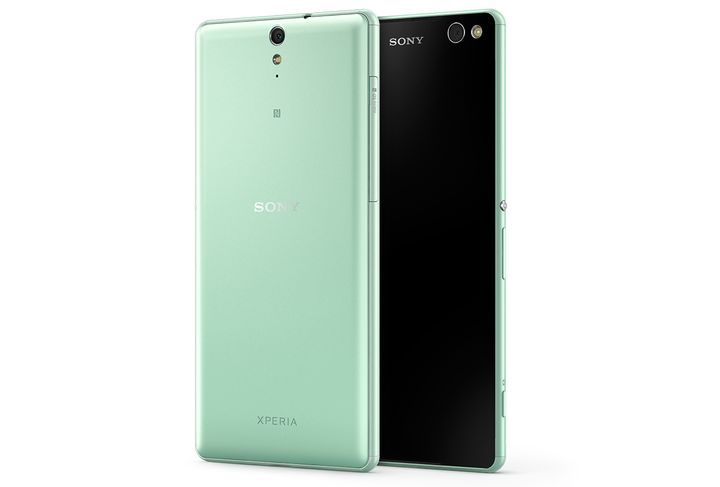 At the top, there is audio jack. Next to him, the body was hidden under two antennas: Wi-Fi / Bluetooth and GPS. The opposite side of the occupied USB-connector. Is there a microphone. 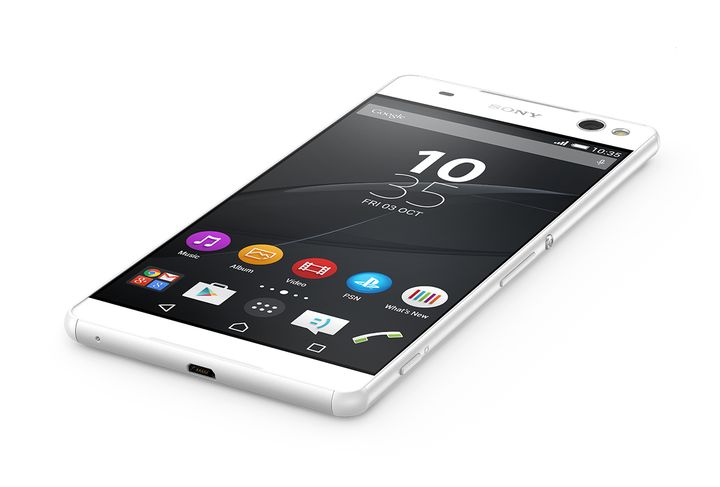 The display occupies 76% of the front panel. Above it shines silver logo of Sony, which is located to the left of the notification light and proximity sensor / brightness settings, and the right – facing the camera with flash. At the top of the front of the speaker is placed. Another is at the bottom.

The battery is not the removable smartphone, consequently, the back cover of the user do not need to shoot. Beneath it lies NFC. The reminder of the technology can be found outside of the case – in the form of a neat little logo on the back side. The main camera and LED flash are located exactly on the main meridian smartphone.

Assembled unit on the conscience. Slots, no backlash, and squeaks. Perhaps, with the active use of the resources the device will overheat, however, as many members of the Sony Xperia, but it is not critical.

To protect new smartphone Sony Xperia C5 Ultra from external damage, Sony has released a special case SCR40. It has no functional windows, like accessories for Xperia Z5, but it can be used as a stand for a smartphone. Thus, the user can comfortably read news, view documents and watch while eating or traveling.

A six-inch screen is required to be of high quality because it is at such a huge diagonal “grain” will be visible. And any distortion, in this case, negates the enormous size. Therefore, Maker Sony had a good try to satisfy the needs of users, always, in addition to bread and circuses still hungry on a gorgeous screen.

In the case of new smartphone Sony Xperia C5 Ultra proprietary technologies have been used Sony, which was originally used in TV sets of the latest models of the Japanese brand. Of course, everything has been optimized for mobile devices, so they worked steadily and rapidly. 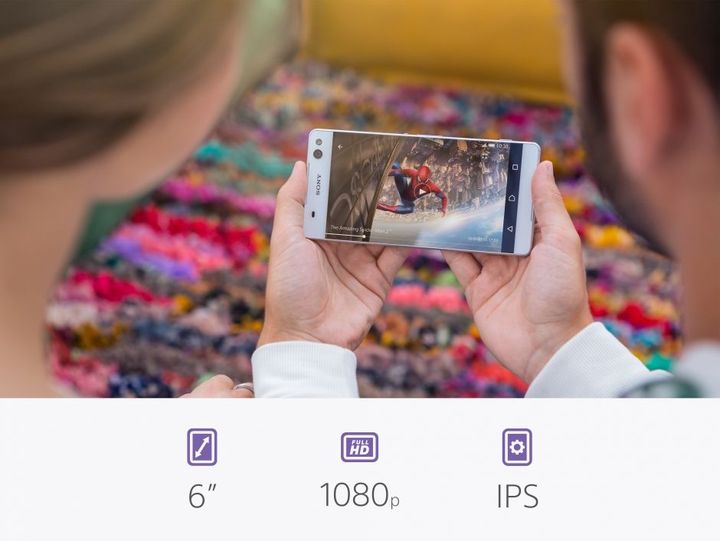 Display new smartphone Sony made by technology, IPS. Apple and Samsung are taking their alternative matrix, and IPS-display them compete in quality. They are still relevant.

Sony has improved the already good development of its technology Mobile BRAVIA® Engine 2. The result was impressive. Brightness and contrast are at the height corresponds to the natural color reproduction, and the image is not distorted even at strong angles.

Screen resolution complies with Full HD – 1080 x 1920 pixels. For manufacturer tried to be nice, but it can and better. Recall that the display “premium” flagship Sony this year – Xperia Z5 Premium – received permission in 2160 x 3840 pixels with a diagonal of 5.5 inches.

However, new smartphone Sony Xperia C5 Ultra – not the flagship. And compare pointless gadgets, especially as Full HD – is a high resolution, which today is enough for high-quality movies and play 3D-games with rich graphics.

The pixel density of the screen on new smartphone Sony Xperia C5 Ultra has 367 ppi. In addition, the smartphone features Super Vivid mode that makes the world on the screen even more colorful. 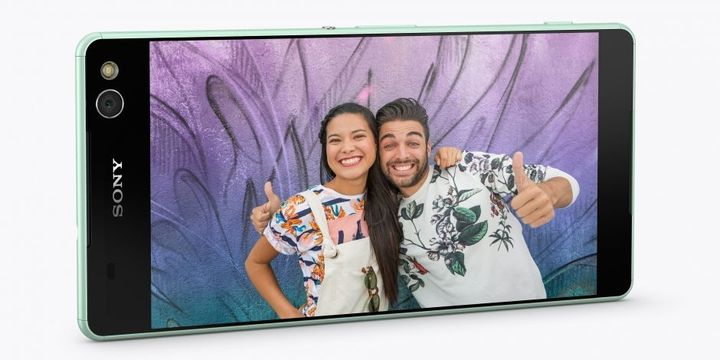 The narrow scope of the display should not be confusing during operation new smartphone Sony Xperia C5 Ultra: accidental contact with the edge of the screen do not affect the operation of the device. Safety glass is resistant to scratches. It has an oleophobic coating.

By the way, to control the smartphone with one hand a special mode that when activated virtual display is reduced to four inches. It can be moved around the screen and a physical increase or decrease in its sole discretion.

Management is performed with the help of smartphone mobile operating system Android 5.0 Lollipop. This version performed well on other devices Xperia. It works stably without kinks, why worry about the sudden failure is not necessary.

The base hardware platform new smartphone Sony Xperia C5 Ultra lay MT6752 chipset from Mediatek. A feature of the system-on-chip is considered to support 4G LTE and playback video as Ultra HD. There is also support 2G, 3G, and Wi-Fi. The chipset includes a 64-bit, eight cores ARM Cortex-A53, working with 1.7 GHz and a graphics accelerator ARM Mali-T760. The processor is interesting that each of its core works independently. As a result, the user of the smartphone provided high efficiency and saving battery power. 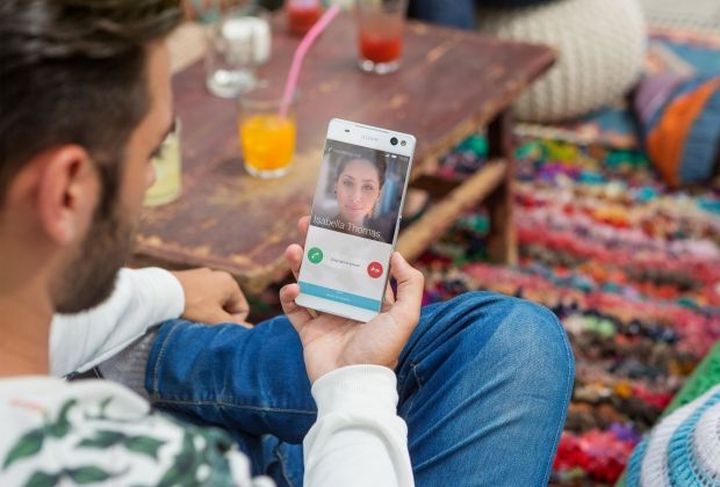 With such a filling smartphone runs confidently and consistently. Modern games are played well. For example, Lara Croft Relic Run never flew throughout the test.

And each of them takes on a specific task. With these technologies, record reproduced cleanly and without distortion. All is set automatically, so the user Xperia C5 Ultra can only enjoy the perfect sound of your smartphone.

The external speaker is quite good. He can re-create the sound up to 95 decibels. In addition, the built-in audio system is supplemented smartphone technology increase the volume Clear Phase, which adds brightness and depth of the music. Music lovers will definitely be delighted by this unit.

The most important thing in the new smartphone Sony Xperia C5 Ultra – is his camera, in particular, the front camera: something! Recall that the predecessor of new items called Sony Xperia C4 was equipped with a web camera with a resolution of 5 MP with LED flash. Alas, fans SELF-such authorization is no longer enough. Therefore, Sony released a smartphone with a powerful and at times better.

More specifically, the company made a device with two main cameras from different sides of the body: the front and rear. Both cameras have nearly identical specifications and create the same good shots. The only difference – in the lenses: the camera at the back focal length of 25 mm, and Selfie – 22 mm.

Thus, the smartphone uses two matrix Exmor RS. The cameras new smartphone Sony Xperia C5 Ultra have a resolution of 13 MP – this is not so much like a 23-megapixel main camera model Xperia Z5, but better than her own front 5 MP.

AF operates smoothly in both chambers. The maximum photo resolution of 4128 x 3096 pixels.

LED flashes remarkable that not dazzle as much as conventional flash cameras. They provide a soft illumination, so you can get perfect pictures in any lighting conditions. The “Smartphone” identifies and analyzes the background survey, which adjusts the flash. As a result, all made with the Xperia C5 Ultra photographs of the natural light present. 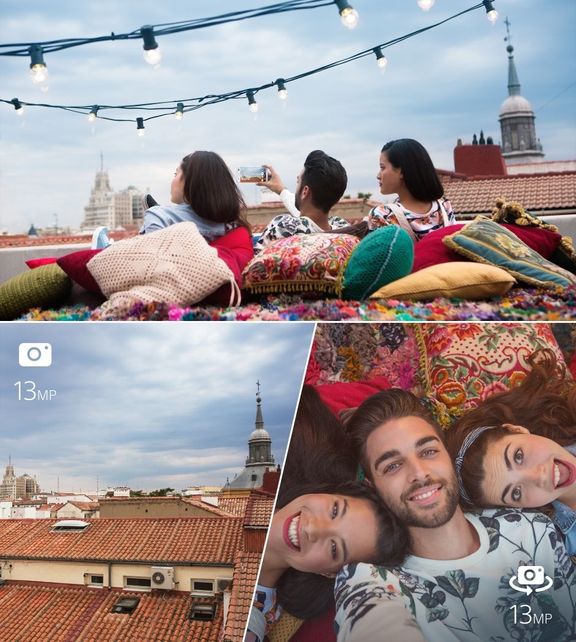 Besides the standard mode, the menu can be found photographing mode. When it is activated the camera will detect the shooting scene and automatically adjusts for it.

For fans of the self-portraits of the smartphone makers have established a number of interesting branded applications.

One of them is called Style Portrait. This is a mobile program that retouches portraits professionally. AR mask allows you to put on face masks diverse: while shooting or ready-made images.

More interesting and original application is Face In. Use it to capture the reaction of the photographer on this or that event at the time of the shooting. It creates a kind of collage of photos obtained at the same time with two cameras Xperia C5. 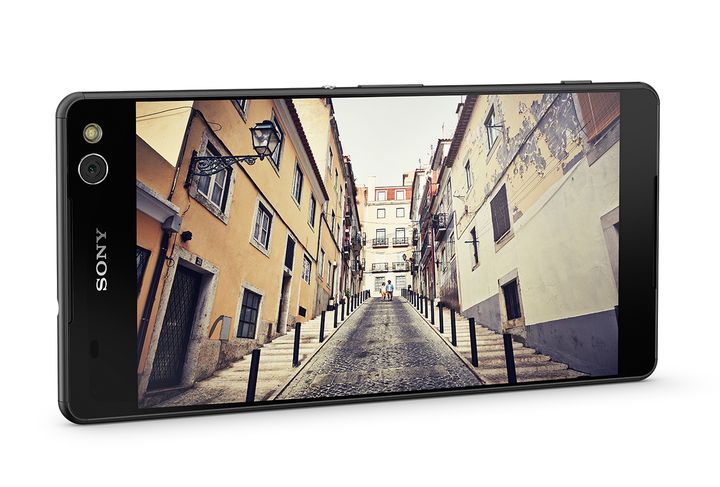 Another advantage of the new smartphone Sony Xperia C5 Ultra – is a long battery life. The smartphone has a very good indicator of autonomy. It is equipped with a lithium-ion battery capacity of 2930 mAh. On the official Sony, the site indicated exponential time gadget. In some places it is too high, here and there, on the contrary is underestimated. In practice, the full charge long enough smartphone:

In other words, on average, with the active operation of a fully charged battery will last for about two days. But that is not all. The new smartphone Sony Xperia C5 introduced power-saving mode STAMINA. When you activate the smartphone resources are spent to a minimum, so that the battery discharges much more slowly. 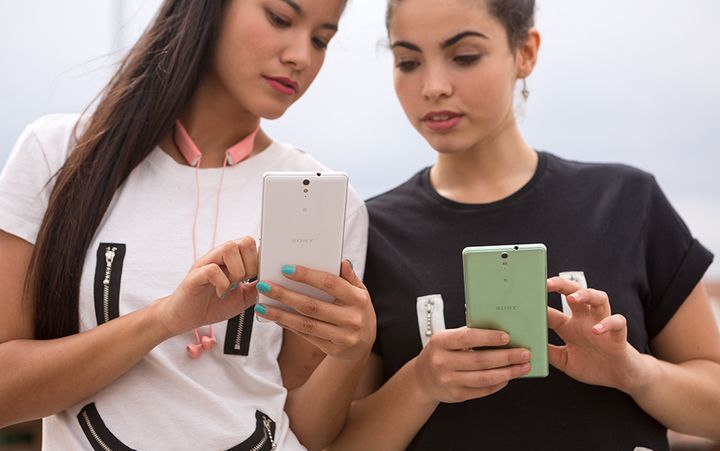 The principle is simple: as soon as the device’s screen is locked, all the programs are switched off. That is, you can still receive calls, email and SMS-messages, but all background applications, waste spending energy gadget will be disabled. Once the screen lock is removed, all the processes are restored.

Thus, the mobile program will not be useless to consume the energy of your smartphone, and it will increase the autonomy, the exact data of the manufacturer, even at 14%.

The new smartphone Sony Xperia C5 Ultra can be called one of the best smartphones to self today. He focused on the self-portraits of lovers, has all the necessary components and features that they value and who pay attention to when choosing a system: an excellent front-facing camera, perfect ergonomics, good performance and a good autonomy.

Of course, phablet crossbows for use is not very convenient, and it is really great. But you can enjoy them on a tremendous screen and Full HD-resolution.

We will not deny, new smartphone Sony Xperia C5 Ultra – the novelty is not for everyone. We can say that the device is a niche, but go unnoticed by fans of the self he did not succeed. The model is expected soon on sale.