Home NEWS The fight for the attention of users: application bypassed the music in less than five years 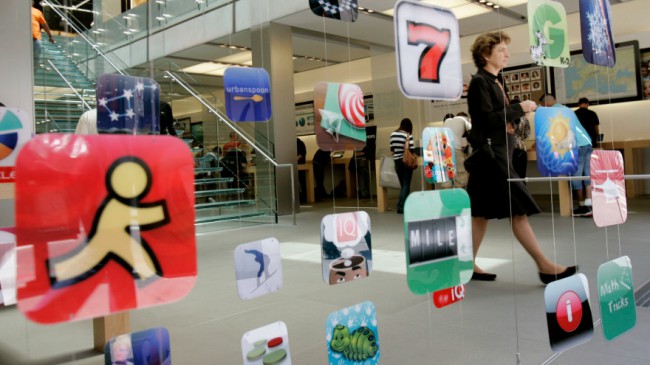 The fight for the attention of users: application bypassed the music in less than five years Last week, Apple announced that since the opening of the digital store iTunes App Store in July 2008, the total number of application downloads exceeded 60 billion

It is worth noting that in May of this year, the search giant also shared statistics regarding the total number of applications downloaded from the store Google Play – 48 billion in other words, in such a short period of time, owners of mobile devices running iOS and Android have established more than 120 billion apps .

Resource Quartz shared a rather interesting statistics application downloads over the past five years. Moreover, journalists compared the achievement of Quartz iTunes App Store and the iTunes Music Store. Sales online store Apple iTunes Store this spring exceeded 25 billion songs (about 30 billion at the moment). Unfortunately, this comparison is not the best, as the song began to be sold much sooner and have some connection with the real world. On top of that, the average cost of one song a little higher than the average price of an application. Unfortunately, sales of movies and video games are also not the most suitable for comparison. However, this comparison is necessary because it allows you to get an idea of ​​the time that users spend on apps, games or movies. There is a perception that they are increasingly replaced by another one, and every day the struggle between developers for attention that is now in short supply, it is becoming increasingly fierce. 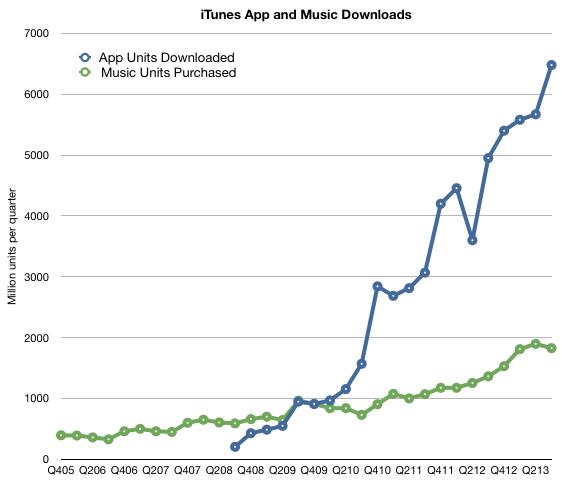 At the moment, many people are asking the same question – what users are willing to sacrifice in favor of the application? The answer to this question can tell the story. In the recent past, most abandoned in favor of the radio channels. A little later began to prefer records, rather than live music. Now you can actually see how the Internet and social networks overshadow TV and traditional media.

It can be assumed that applications will impact the most modern manifestations of the media. In this case, and the impact and consequences of such exposure is almost impossible to predict, because these new media objects are elusive for the “radar”, used in the mobile industry. The absence of the necessary tools to measure the impact of applications is one of the hallmarks of the destructive shift in the industry – it is impossible to perceive what can not be measured and controlled.

Assess the impact of the growing market for applications is possible, if you think about the level of income of the developers. Most of the young and talented people prefer an environment in which you can earn more. In the example it is possible to put the film industry and theater. Now you can see how most developers prefer to companies engaged in the development of web applications and mobile devices. Thus, the migration of talent from one industry to another is faster than the movement of capital. 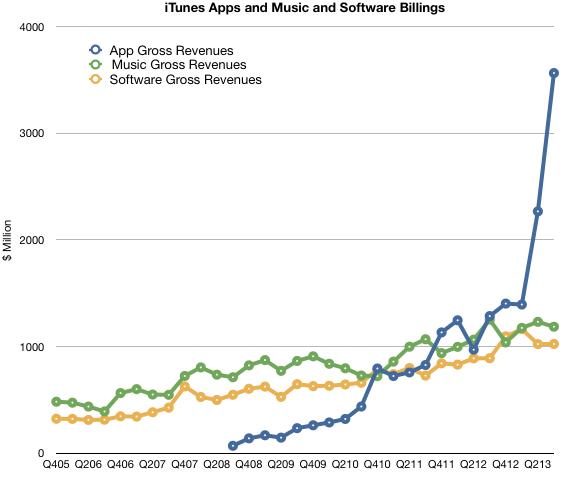 If you look at the ecosystem of iOS, you can see how Apple will generously reward developers. Last week, Apple announced the payment of $ 13 billion of comparison, in June, said about $ 10 billion worth noting that it is about 70% of the gross income. In other words, the proceeds from the sale of applications each month increased by $ 1 billion if we assume that Google monthly pay developers as much and take into account the fees for applications built to order, we can draw the following conclusion – application developers earn about $ 3 billion per month .

As for the music industry, here the situation is somewhat different. According to the International Federation of sound and video recordings (IFPI), revenue from sales of digital songs in 2012 was $ 5.6 billion, while the music industry in 2012, earned just $ 16.5 billion sale of songs hardly risen more than 10% in 2013. Thus, it can be argued that the application brought twice as much profit as compared with the music. This growth scare many analysts. Applications overtaken music as the basis of most business models in less than five years.

In the world there are many tablets cost $ 50, are sold in Asia and the eyeballs scored illegal content. If this pattern of behavior will flourish further, the victims of the mobile device market will not only PC makers, but most of the media.