Notebook-transformer Dell Inspiron 13 (7348), which we will tell you in this review, is almost completely analogous to the previously reviewed model Dell Inspiron 11 (3147). Used exactly the same design and construction, so that the two transformer differ from each other mainly in size and some minor features dictated by the size difference. However, unlike his younger brother in the family, Dell Inspiron 13 (7348), equipped with the latest energy-efficient processor Intel Core i5-5200U architecture Broadwell.

The predominant color Dell Inspiron 13 designers chosen silver, in this color made all the external surface of the notebook. In light of the open state successfully diluted black border of the display unit and black keyboard island.

Top cover laptops finished with silver plastic with sofftach effect. Cover differs completely flat mirror surface and logo of the manufacturer. Base of the housing is made of exactly the same “uhvatistogo” sofftach-silvery plastic, so a transformer is very comfortable to carry from place to place in the hands of no slipping out of the question. 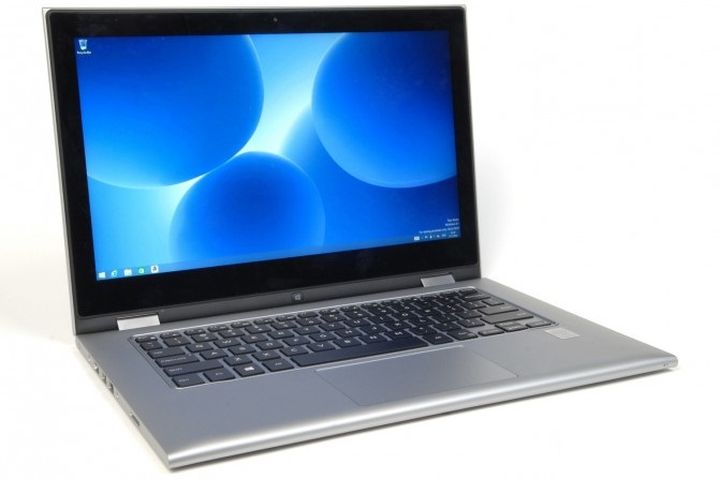 In contrast to the flat cover on the bottom of Dell Inspiron 13 can be found rounding (closer to the sidewalls), mounting screws, official stickers and thin four rubber feet. Open slot for the battery is not here, as well as a convenient “hatch” to upgrade components. However, if necessary, replace the memory or the hard disk does not take much to remove the entire bottom panel as a whole because it holds all five screws.

When viewed from the side faces of the body can be seen the same design feature as the junior Dell Inspiron 11 – a side wall assembly made flat, and the front and rear edges of the base and the display unit are different characteristic rounded shape. Apart from the purely design problems (originality, recognition), this solution allows the touch to determine what kind of a face is at hand.

The right side of the front edge of the notebook can be found miniature activity indicator. The central part of the rear face of the body takes grille cooling system, here you can examine in detail the metal hinges hinge of the display unit. On the left side you can find an acoustic speaker, combined audio jack, two-port USB 3.0 (one of which supports charging accessories shutdown mode), the full-size HDMI video output jack and charger. 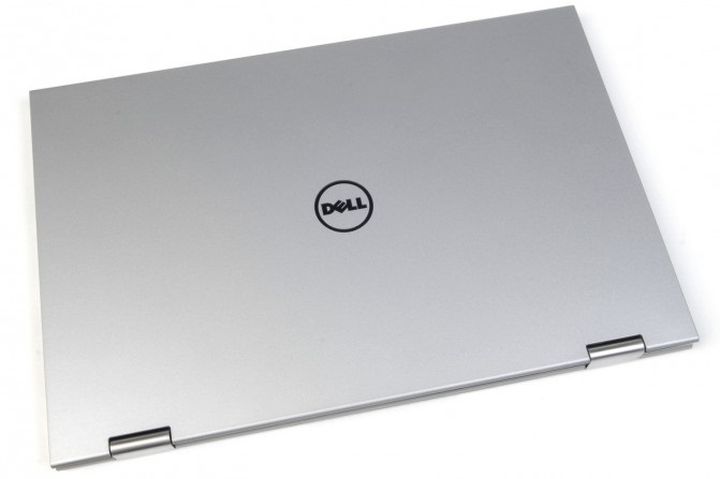 Right side plate is arranged very unusual for a classic notebook, but it is quite normal for a transformer. In particular, it placed power button and volume rocker, which can be used in any of the four modes of transformation (laptop, tablet, stand, canopy). What follows is symmetrically arranged speaker, the third port USB, memory card slot, and a silver “button”, which is proving to be bundled stylus cap. Developers quite rightly felt that it is more logical to place the stylus in a special slot in the laptop case, and not to rely on the fact that users will not forget to take it with you as a separate accessory.

Model Dell Inspiron 13 (7348) is a 13.3-inch laptop with a special hinge that allows the display unit to rotate 360 degrees around the axis of the mount. Thus the device can be operated in the notebook mode, the multimedia stand, canopy and proper tablet (more on the process of transformation can be found in the review of Dell Inspiron 11). A hardware keyboard is used only in the first mode, the remaining three cases, the basic control method is a touchscreen device, supplemented with supplied stylus. 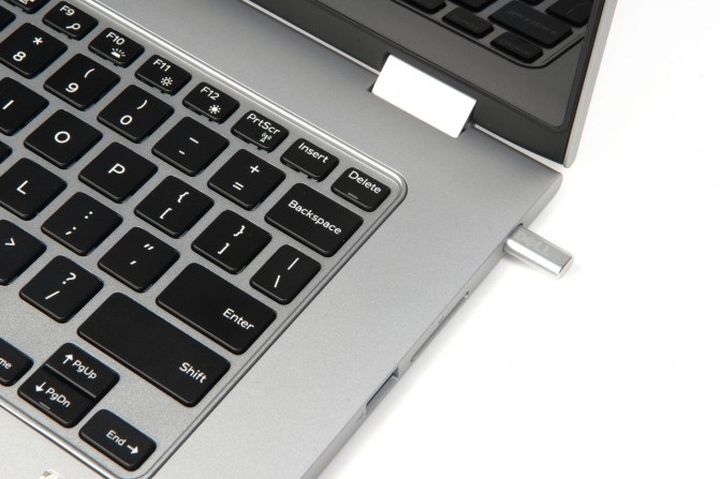 The inner part of the display unit is covered by a protective glass layer with integrated touch. Thus in notebook mode, the user can control the device with the help of a rather large touchpad and using the touch screen. In the lower part is rubberized with tight hardware key Windows.

Operating panel Dell Inspiron 13 different characteristic “phony” form of fillets close to all four edges. Island keyboard is placed in a small depression operation panel, its layout is typical of the 13-inch models. Keys became slightly larger compared with younger brother, but made Enter “odnoeatzhnym.” The keyboard has a white backlight, level of brightness is adjustable between the two grades.

As we mentioned, the laptop Dell Inspiron 13 (7348), equipped with the latest energy-efficient processor Intel Core i5-5200U microarchitecture Broadwell. The processor is configured for 14-nm process technology and has a maximum level of heat in 15 watts. Model Intel Core i5-5200U has two cores, capable of operating at a base frequency of 2.2 GHz and a maximum frequency of 2.7 GHz, as well as integrated graphics Intel HD Graphics 5500. 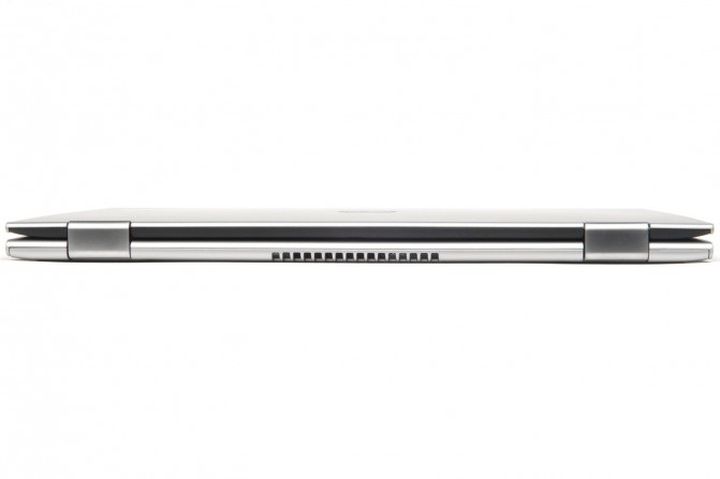 Tested model Dell Inspiron 13 (7348) is equipped with a 13.3-inch touchscreen IPS-screen with a resolution of 1920 × 1080 pixels. The brightness is adjusted manually from 20 to 170 cd / m2, also available automatic backlight based on the performance of the light sensor.

Interestingly, in this model is used exactly the same battery as in the more compact 11-inch model – three-piece removable 43 Wh. As a result, the full charge of the battery the laptop was able to hold 2 hours 15 minutes at maximum load, and 7 hours and 20 minutes in emulation mode of reading.

As a result, Dell Inspiron 13 (7348) – it’s quite a good representative of the family of laptops, Transformers, which will attract the attention of potential buyers of fresh hardware platform Intel Core “Broadwell”, an excellent 13-inch IPS-screen with a resolution of 1920 × 1080 pixels and of course ability to work in four modes: laptop, tablet, stand and tent.