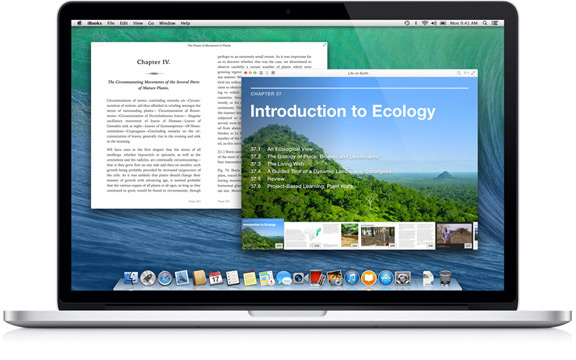 Today at the quarterly meeting of the managers of the retail Apple company marked its intention to give away for free to all employees of retail outlets eBooks. Campaign called iBooks Discovery will begin next week and will prepare vendors and consultants to the upcoming release of operating systems OS X Mavericks and iOS 7.

Mavericks will be the first Apple computer operating system with support for online kiosk iBook Store. For this reason, the Cupertino have decided to provide you with a free chain stores samples of e-books, so that workers can master the program. This, in turn, is aimed at increasing the chances of a successful launch of the new Mac-service to customers.

IBooks app for iOS 7 has not officially submitted. At a meeting of Apple employees could see a new “flat” application icon, processed under the new OS.

Similar programs familiarize staff with future products have already been held at Apple. So, in November of last year launched an initiative called Apps Discovery. As part of this campaign, employees can free download for themselves many popular paid applications from the App Store. The program is designed leadership Apple has not only to workers better versed in the software for the iPhone, iPad and iPod touch, but also as an additional incentive bonus for employees.

Other steps towards the development of retail stores Apple, include a recent search for new ideas to increase sales of iPhone, as well as the release of a new version of the mobile application Apple Store.