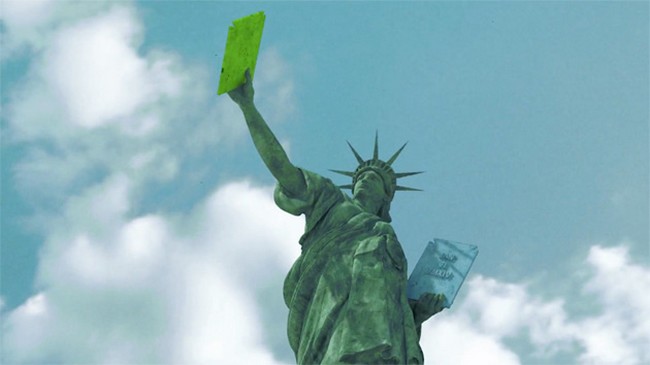 ASUS CES 2014 before decided in the specific form stir interest in the announcement of a new hybrid device, which will be held at the upcoming exhibition.

Hero movie became a symbol of New York City and the United States – the Statue of Liberty, which brandishes a hybrid mobile device, iridescent two colors: green and blue.

You would think that the ASUS show at CES 2014 a new generation of hybrid device Transformer Book Trio , which advertises and the Statue of Liberty, and green and blue, gradually changing each other, are a combination of OS Windows (most likely, Windows 8.1, as from Windows RT it long refused ) and Android in both laptop and tablet mode. Recall that the current model Transformer Book Trio provides an opportunity to “dual-boot” mode only laptop.

It is also possible to suggest that the basis for a new generation of hybrid device 3-in-1 ASUS Transformer Book Trio lie processor Intel Atom ( Silvermont ).