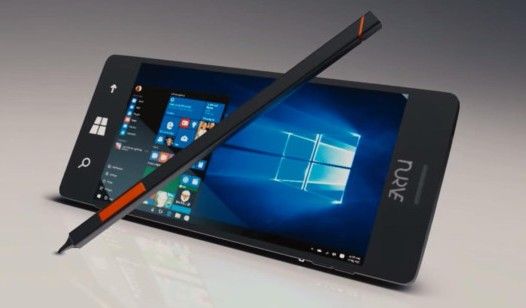 The site IndieGoGo, which is a kind of incubator for an interesting future projects, appeared information about another promising new product.

It is a Windows smartphone SyncPhone, which is the maximum (Pro) version has a processor Intel Atom x7-8700, stylus and 8GB of RAM!

Developers planned that the new product goes on the market in three different versions: SyncPhone, SyncPhone S and SyncPhone Pro. All these models will get a screen with the size of 5.4 inches, two slots for memory cards and operating system Windows 10.

Should be noted that the highest version SyncPhone Pro will be the most powerful Windows smartphone.

And if you add to this list a stylus and a full version Windows 10, such as tablets, laptops and PCs and you will realize that this device will really be something incredible.

Ever wondered how you can work with a full version of Windows 10 on a screen 5.4-inch smartphone? Therefore, the stylus is an important part of smartphone, so the user can control the interface of the operating system.

If developers of SyncPhone will be able to collect a million dollars, then they will release Dual Boot version of the smartphone with Android and Windows 10 on board.

What will be the price of SyncPhone?

The cheapest version of SyncPhone for its first 1000 customers will cost $199.

The price of SyncPhone S for the same category of customers will be $299, but the most expensive SyncPhone Pro was priced at $499.

If fund-raising campaign will be successful, smartphone shipments will begin in February, 2016.